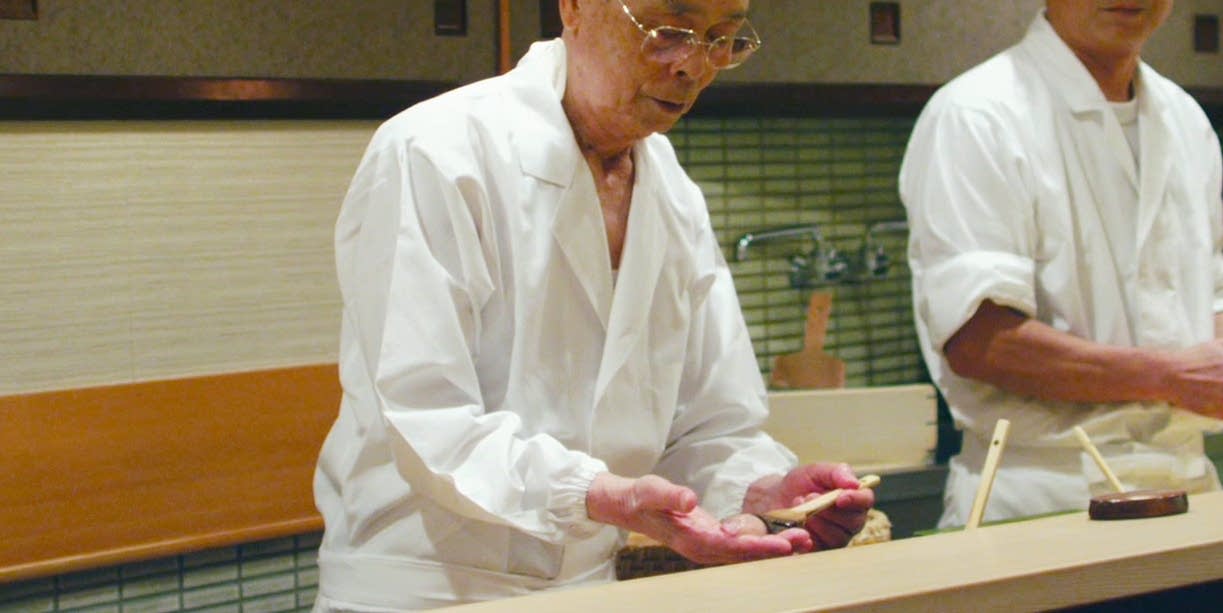 Another side of the sushi that we pick up at the takeout counter is the subject of a quiet and fascinating new documentary: Jiro Dreams of Sushi. Jiro Ono is 85 and he’s considered the finest sushi maker in the world. His life has been about finding perfection in sushi above everything else.

Sukiyabashi Jiro, his Tokyo sushi bar, is in what looks like a subway tunnel of an office building. There are only 10 seats and you wait months to get one of them. Filmmaker David Gelb followed Ono as he worked with his son and talked about this life.

Lynne Rossetto Kasper: Who is Jiro-san?

David Gelb: Jiro is a sushi chef who works in the basement of an office building in Tokyo, and he’s known by chefs around the world as being the world’s greatest sushi chef. He’s 86 years old now and he was a child during the Great Depression in Japan. His parents could not afford to support him, so they essentially told him, “Go get a job; you’re on your own from now on.”

LRK: From watching the film, there’s no gimmick. We think of sushi in this country and we think of rolls and combinations, but he’s doing fish and rice.

DG: Yes. This is the great misunderstanding about sushi. Nigiri is the traditional Tokyo style of sushi, which is where the fish is on top of the rice -- it’s the classic appearance of sushi. These large rolls like California rolls and Philadelphia rolls are all American creations.

But sushi is a lot more than just fish and rice, and Jiro through decades and decades of trial and error has managed to create the perfect balance between the rice and the fish. The temperature of the rice, the type of rice, the process of cooking the rice -- which is cooked in a very high-pressure situation -- and the preparation of the fish requires years and years of experience. The preparation of the fish requires years of trial and error to age it just the right amount, to marinate it for the perfect amount of time and in the perfect type of vinegar. If they’re marinating it in vinegar, they salt some of it; some of it is simply aged in a refrigerator for the appropriate amount of time. All of these factors come together to produce what is really the perfect bite.

LRK: It was interesting to see the years of apprenticeship by the people in his kitchen before they could make an omelette, and the amount of perfectionism that’s at work in that kitchen. Jiro-san does not seem to be someone who is extraordinarily open. What was the most difficult part of the process?

DG: The most difficult part was the language barrier between myself and Jiro and Yoshikazu, his son.

Getting them to accept me and to allow me to make the film was actually easier than I thought it would be, and this is all thanks to Yamamoto-san [Masuhiro Yamamoto], the food critic who appears in the film as something of a narrator. He convinced Jiro-san that I would be the right guy to make this kind of movie, simply because I came in as a blank slate. I had no agenda specifically other than to tell the story of Jiro and Yoshikazu from their perspective. I’ve learned that patience is the key to earning the trust of your subject. I managed to find a way to embed myself into their daily routine but without influencing them or distracting them.

LRK: As I was watching the film unfold -- seeing the level of dedication that Jiro-san had for his work, he lived and breathed sushi, and demanded that of his son -- I felt rather sorry for his son. It didn’t seem his son had any choice about what his life was going to be.

DG: Jiro-san once said that sometimes you don’t choose your job, and your job chooses you. There were many things that Yoshikazu wanted to do; he wanted to be a race car driver and he wanted to be a fighter jet pilot. But I think that he is very proud to be where he is and to do what he’s doing by the side of his father.