You can cook pasta in a small amount of cold water

by Lynne Rossetto Kasper
Listen: You can cook pasta in a small amount of cold water
05:20 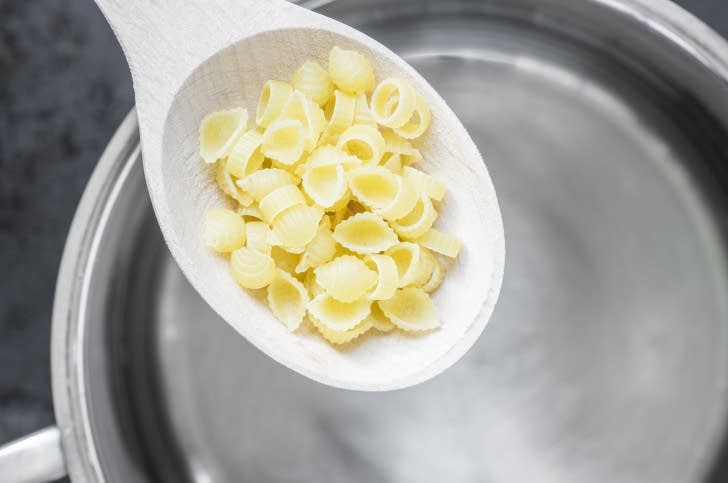 "I recommend cooking a pound of pasta in a quart-and-a-half of cold water in a frying pan," says Harold McGee, author of Keys to Good Cooking. "It takes 15-20 minutes instead of 45 with the heat-up of the water."

Lynne Rossetto Kasper: I want to talk to you about the section of the book that deals with pasta. You have a lot of nerve. You talk about cooking pasta in ways that -- I would say every Italian colleague I know is probably gunning for you.

Harold McGee: This came out of cooking pasta the standard way, in a big pot of water, which took 20 minutes to come to a rolling boil. Then I cooked a pound of pasta, which took about 12-15 minutes. I poured all that hot water, energy and stuff from the pasta down the drain.

As my glasses steamed up, I thought, "Why am I doing this? Why am I spending more time heating the water up than actually cooking the food in it, then pouring all the energy and water down the drain?" I live in California, where we think about saving water frequently.

I thought, "Cookbooks say, 'Never cook pasta in just a little water because it'll end up gummy, sticky and not very nice.' But I wonder if that's true?"

I just did the experiment of cooking a pound of pasta in just enough water for it to absorb. I thought, "While I'm at it, why don't I play with the heating as well? I'll start them in cold water and see what happens."

I found that starting in cold water means that the pasta doesn't stick to itself, which is great. Then it turns out that it heats up, it cooks just fine and you end up with pasta that is not at all sticky. The liquid is a little thick, but that's wonderful because you can make a sauce out of it.

I recommend cooking a pound of pasta in a quart-and-a-half of cold water in a frying pan. It takes 15-20 minutes instead of 45 with the heat-up of the water. It works just fine.

LRK: There's something that you mentioned that I liked because it's an old trick: cooking the pasta in wine and broth or in wine and water.

HMG: It's almost like a risotto version of pasta or a rice version. After I published this, I started to hear from people who had actually traveled to various corners of Italy. They said, "This is nothing new. People have been doing this kind of thing for a long time." It's just something that hasn't been as mainstream as the big pot of water technique.

LRK: There's an old farmhouse recipe where you brown some celery, carrot, onion, garlic and salami -- bits and pieces, essentially -- and start the beginning of the sauce. Then you add the pasta, wine and water. I've done it with adding a lot of wine and water, but what you're saying makes sense. You make it like a risotto. You add very little. It is really a tradition. This is a really great idea.

You're talking about starting the pasta in cold water. What would happen if you pre-soaked the pasta?

The tricky thing about it is that it is a little time-sensitive. If you leave it too long, then it does tend to get a little mushy. But if you pre-soak it and then start it in even less cold water, then you get a very nice result.

LRK: How long would you soak it?

LRK: Would you put salt in that water?

HMG: Yes. That's a great of way of seasoning the pasta inside and out.