'Music to have a pizza party to': Collecting vintage food- and drink-themed records

by Lynne Rossetto Kasper
Listen: 'Music to have a pizza party to': Collecting vintage food- and drink-themed records
05:58 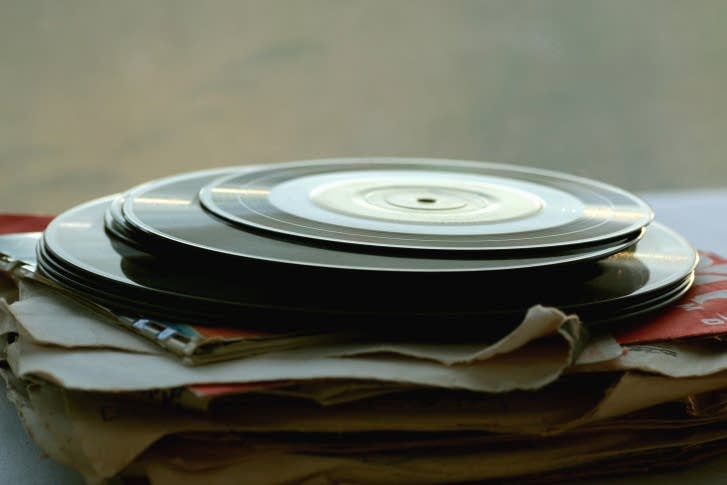 James Oliver Cury collects vintage food- and drink-themed records. "I probably have somewhere between 150 and 200 albums," he says.

Lynne Rossetto Kasper: What is this collection?

James Oliver Cury: I have collected records, vinyl LPs, and 33s and 45s for several decades now. I've focused on food- and drink-themed records for probably the last 20 years.

LRK: Are these records with music to eat dinner by, or are these how-tos and that kind of thing?

There are several pizza party records that I have. That's a huge genre or sub-genre within itself. But one of the records that I have is essentially a promotional LP for a company called Jeno's Pizza. They have a band called the Accordionaires. There's nothing particularly Italian about the songs or about the song titles. It's really just music to have a pizza party to.

And yet the music, it's a total disconnect. That's one of the curiosities to me: Why was pizza so interesting, and who was buying a record about a pizza party anyway?

LRK: It sounds like early product placement. It was an ad essentially for this company and this particular band.

JOC: Absolutely. Some of these records were available to the public in record stores. Some of them were undoubtedly just sent to radio producers or handed out at conventions so that somebody would play it on the air.

LRK: There's one I see: mom is in a frilly apron, there are candles on the table, dad is in his suit and tie. But it's called "Hear How to Plan the Perfect Dinner Party."

JOC: It's funny. There are a lot of Norman Rockwell-esque moments on the covers of these albums. I get an insight into what someone's view of Americana is, whether that's an actual depiction, whether it's the romanticization of the suburbs or whether it has to do with some sort of other post-war cultural shift.

This is an interesting record because it came out in 1960. It's about a year I think before we saw Julia Child's masterpiece. Yet we know that there were lots of books coming out that were trying to help people cook and entertain. This really is a guide to how to cook four different deluxe dinners.

The interesting thing for me is also what they chose to focus on. They have a French dinner menu, a Polynesian dinner menu, a chicken dinner and a steak dinner. You get the sense that the Polynesian speaks to the tiki interest of the time. The French is certainly considered to be the gourmet upscale dinner. Steak was probably very Americana meat and potatoes. Then chicken was almost like the safety that we have today -- chicken being one of the most popular words you'll find in recipe searches in general.

JOC: The funny thing is that several jazz greats recorded either songs or whole albums that somehow were dedicated to food. I'm as interested in cover imagery as I am in the content on the album. So it could be that there was just a popular song called "Salt Peanuts" and a million different artists took that song and put that on the cover of their album in a very either ludicrous or kind of sexy way that would make no sense in today's market.

I have "Supersax Plays Bird" -- referring to Charlie Parker. These two women on the cover of the album are naked holding saxophones and sitting on a giant mound of peanuts. What you get actually are some jazz guys playing Charlie Parker songs, including "Salt Peanuts." But the cover is totally exploiting the idea of both food and women on it in a way that just -- it takes your breath away almost. At least it makes you scratch your head and laugh at the same time.

LRK: How many albums do you have?

JOC: In the food realm alone, I probably have somewhere between 150 and 200 albums. It's just part of a collection that has about 5,000 records total in different categories. It's constantly growing. I'm always searching on eBay or whenever I'm in a record shop, which are fewer and fewer these days. The good thing for a collector of this genre is that there aren't that many other people competing for this particular niche.