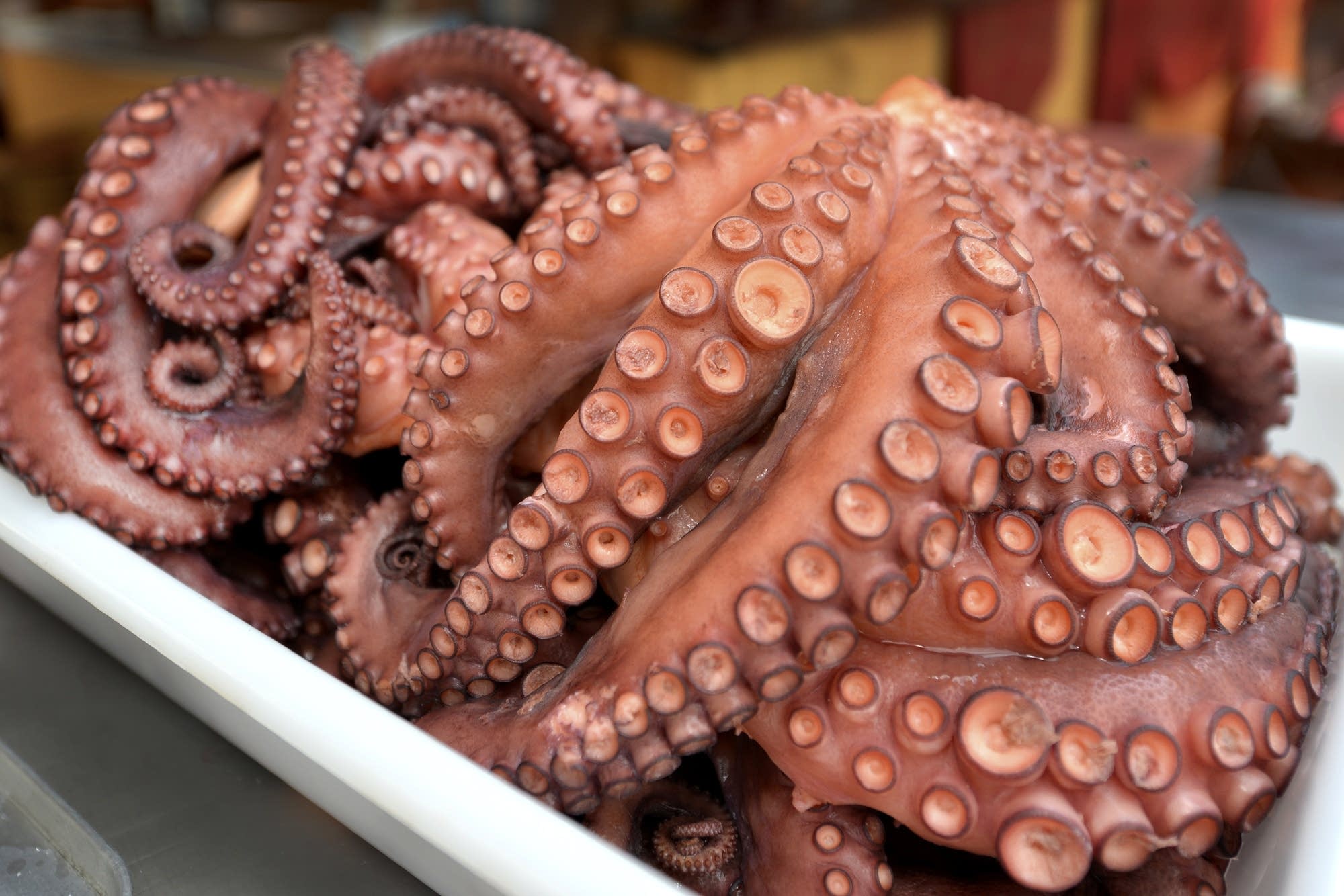 As an ancient denizen of the deep - its ancestors lived at least 200 million years ago - octopus has long been mysterious, thanks to its appearance, intelligence, habits, and remarkable defense mechanisms. (Not only can it shoot a confusing jet of ink to cover its retreat, its skin can change color, almost like a flashing neon sign.) But strange as it may be, the octopus is neither unfamiliar nor uncommon: It thrives in warm and temperate waters throughout the world, feeding on crustaceans and fellow mollusks (technically, octopus is a molluscan cephalopod). Happily, for us at least, it also develops a lovely flavor and texture, as long as it is handled correctly.

It's somewhat surprising, then, that although octopus has been a delicacy, even a staple, throughout the Mediterranean and Asia - especially Japan - for millennia, it remains a mysterious food to most Americans. (Although given our national squeamishness, it's not that surprising.) Even those who grew up eating octopus, even those who cook it for a living, are bound by myths.

Meanwhile, it's on the menus of dozens of restaurants in town. It has long been a standard at sushi bars of course; and you have been able to find it at Spanish, Portuguese, Greek, and even some Italian restaurants for years, in salads, stews, or with potatoes or pasta. Now, however, you see dishes like octopus terrine, octopus confit, octopus risotto, octopus with pasta, and more. Then of course there's grilled octopus, which - since it was first popularized at Periyali about ten years ago - has become downright trendy.

All of these dishes can be readily accomplished by the home cook. The stumbling block, according to reigning "wisdom," is that octopus is so tough that extraordinary measures must be taken to tenderize it. And if you ask five different people what these measures are you are likely to get five different answers, all arcane - which goes a long way toward explaining why no one cooks octopus at home. A Greek cook may tell you to beat it against some rocks (actually a contemporary would probably tell you to throw it against the kitchen sink repeatedly). A Spanish cook will dip it into boiling water three times, then cook it in a copper pot - only copper will do. An Italian might cook it with two corks. The Japanese rub it all over with salt, or knead it with grated daikon, then slice the meat at different angles, with varying strokes.

These methods work, but so does cooking octopus slowly, with no further ado. No one wants rubbery octopus (although sushi-style octopus is nearly rubbery), but if octopus is properly handled, without fuss, it is reasonably tender. It remains chewy, but so does lobster, or sirloin steak.

Octopus is much like squid: If you keep the cooking time minimal, under five minutes or so, you get a chewy but not unpleasant texture; this is a good technique for octopus salad or sushi. But for most preparations, long, slow cooking, which yields a tender texture, is best. (If you cook it too long, it becomes dry and tasteless.)

Although octopi live all over the world, there is a common belief that the best octopus comes from Portugal. But since water knows no political boundaries (and Portugal is hardly a body of water), it can hardly be the whole truth. According to Vincent Cutrone, who owns The Octopus Garden, a Bensonhurst fish store specializing in the cephalopods (octopus, squid, and cuttlefish), "Whether Atlantic octopus is fished by the Portuguese or anyone else, most of it comes from the waters off the west coast of Africa." But Mediterranean octopus is also common, as is octopus from Asia, especially the Philippines. (There is very little domestic octopus, probably because the domestic market is so small; it's an incidental catch and probably thrown overboard as often as not.) After weeks of cooking octopus from all over the world, I detected little or no difference in quality between those from Europe and those from Asia.

Almost all of this octopus is cleaned and frozen before shipping, which is not the disadvantage you might think. For one thing, octopus spoils quickly, so it's difficult to maintain high quality during shipping, especially since it's not expensive and therefore rarely shipped by air. More important is that the quality of octopus, like that of squid, does not suffer noticeably when it is frozen.

In fact there may be benefits to freezing. "There are times that frozen octopus actually seems better than fresh," said Ignacio Blanco, owner of the soon-to-open Meigas, a Spanish restaurant on Hudson Street. "It doesn't hurt the flavor at all, and it becomes tender more quickly."

Size is the other question: There are tiny octopi, under six ounces; these may be difficult to find and tend to be expensive. They're great cooked for a couple of minutes and then served with little more than olive oil, lemon, and salt; but they are really tidbits, mostly suitable for appetizers. The most common octopi we see are in the two to four pound range (there are octopi that weigh almost ten times as much, but these are not seen in stores) You'll also see medium-sized specimens, in the 12- to 16 ounce range. These are useful and convenient because one is a good serving.

Really, size doesn't matter. "I like both big and small," says Rick Moonen, who as chef and partner at Oceana has dealt with octopus regularly for years. "All that matters is that you don't overcook them. Where it comes from, whether it's been frozen or not, the size, the cooking method - these are all pretty much irrelevant as long as you cook it carefully."

Finally, there is the issue of octopus skin, ugly when raw, but a lovely gelatinous, almost fatty substance once cooked. (The animal itself is extremely low in fat.) Some cooks and chefs rub it off. To me, this is equivalent to making osso buco and discarding the marrow. It's worth noting that this gelatin is so powerful that cooked octopus can be made into a terrine simply by weighting it (see the variation on Octopus and Potatoes, below). This gelatinous skin dries out and virtually disappears during grilling and some other preparations.

Almost every octopus dish begins with simmering, and it is not unlike cooking a tough piece of meat: You put the octopus in water to cover and cook it until it is tender.This usually takes about an hour, but may be considerably less for smaller specimens and sometimes twice as long for larger, tougher ones. Judging tenderness is easy: When the thickest part of the octopus (the "skirt," where the head meets the legs) yields to the sharp point of a small knife with little resistance, it is done. "It's like a potato," said Mr. Moonen, simply and correctly.

The simmering need not be in water. Alessandro Giuntoli, chef at Osteria del Circo, braises the octopus in red wine and vegetables, giving it deep, rich flavor and a dark purple color. Even more unusual is the preparation suggested by Tadashi Ono, chef of Sono (which will open later this month in the space of the former Chantilly, on East 57th Street). In this, Mr. Ono simmers the octopus, but in olive oil - a kind of octopus confit.

Once tenderized by simmering, the octopus can be served with little further preparation. Mr. Ono serves his confit dressed with soy and lime juice. It can be tossed in olive oil and lemon juice, with or without other seafood and vegetables, to make a salad. It can be incorporated into a risotto or pasta sauce.

Or, or course, it can be grilled, making it both crisp and tender. This ultimately appealing combination is easily achieved, as long as the fire is hot enough to crisp up the exterior before drying out the interior.

The Essentials of Octopus

Buying: The Octopus Garden, 1780 Stillwell Avenue, Brooklyn (718 946 9221) is a reliable source for frozen and fresh octopus; Vincent Cutrone, the owner, can ship anywhere and "sometimes" deliver in the City. Fresh octopus can also sometimes be found at Citarella, Balducci's, Dean and DeLuca, and other specialty stores; it is usually flown in from Europe but occasionally comes from Mexico or even the Carolinas. The best way to judge freshness is to smell - the aroma should be of seawater, nothing else. (An octopus that is going bad will reveal itself to your nose in an instant.) Most but not all fish markets carry frozen octopus, and any should be able to get it for you with a day or two notice.

Two to three pounds of octopus is about the right amount for four people (it shrinks startlingly). It doesn't matter much if you buy one larger specimen or several smaller ones, though it will affect cooking time (see below).

Preparing: An octopus is a sac (the head) with eight legs. In the head are eyes, a mouth, a pair of beaks, and a file-like organ used to drill through the shells of its prey. Cleaning octopus is a chore, but not a daunting one; it essentially involves removing these innards from the head sack and rinsing; you then cook the octopus, whole. But cleaning is barely worth a thought: I have not seen uncleaned octopus sold in a store in more than five years. All frozen octopus is cleaned before freezing. If a fresh octopus should be uncleaned when you buy it, ask the fishmonger to do it for you.

Cooking: There are no hard and fast rules for timing. Some people say octopus should cook about 30 minutes per kilo (two pounds) but often the timing is longer. A 12- to 16-ounce octopus certainly cooks in less than an hour, and if you put four or even six of them in a pot together the cooking time will be faster than that for a four-pound octopus, which can take as long as two hours to become tender. Check with the sharp point of a thin-bladed knife; when it meets little resistance, the octopus is done. Do not cook further or it will begin to dry out and toughen again.