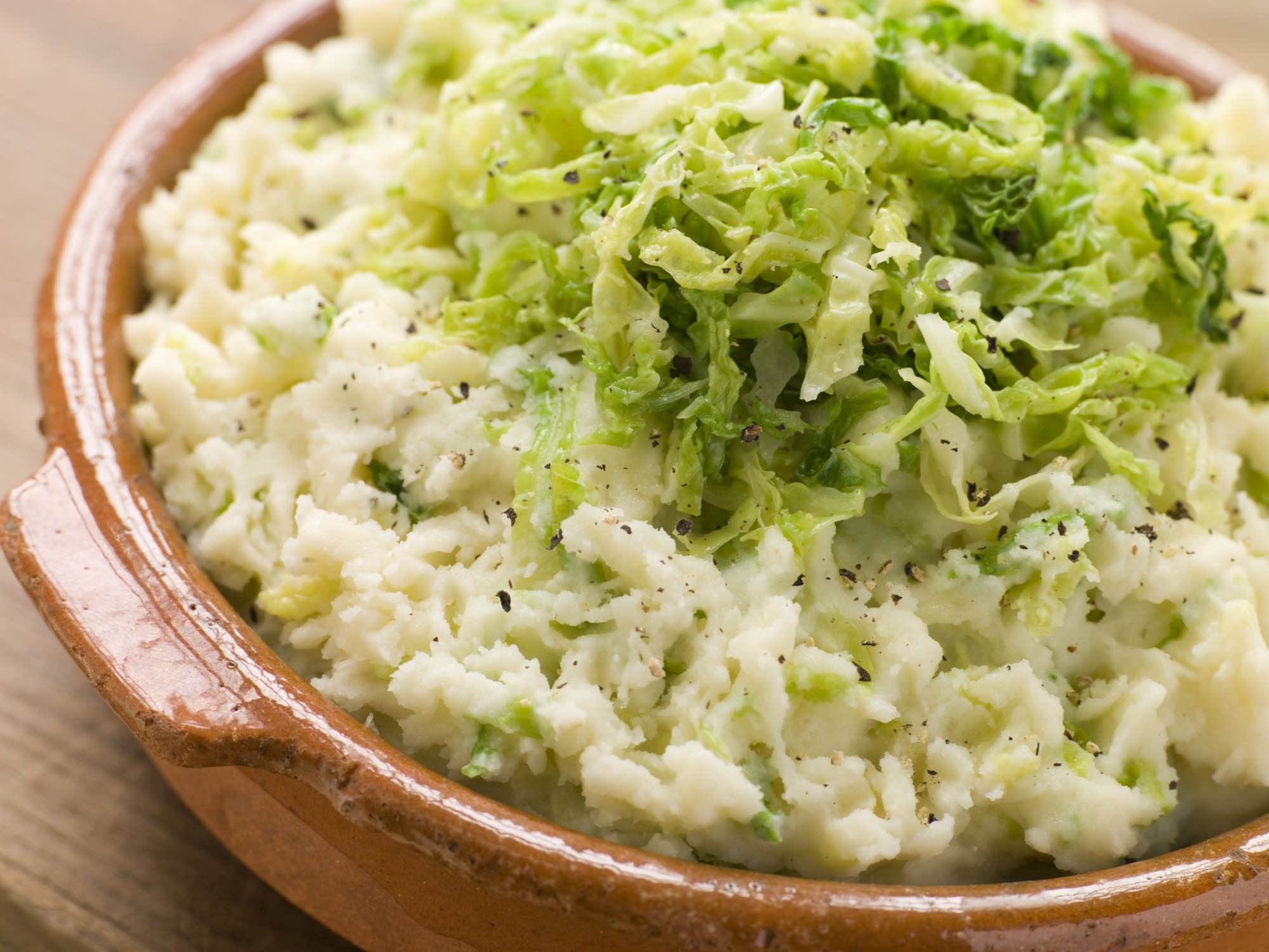 In speaking of this most celebrated of Irish potato dishes, the musician Mick Bolger—whose Denver-based contemporary Celtic band is called Colcannon—notes that it has a "wonderful affinity" for corned beef and cabbage. And he confesses that he has also eaten it "with fillet mignon and port sauce; with rashers [bacon], tomatoes, and kidneys-in-their-jackets at 4 a.m.; and—God forgive me—wrapped in a tortilla, microwaved, and eaten, over the sink, with salsa." It is, in other words, a versatile creation. It is also one that exists in numerous variations, depending on the season, the region of the country, and of course personal taste. It is often made with just butter, milk, and kale, but the scholar P. W. Joyce defines "caulcannon" as "potatoes mashed with butter and milk, with chopped up cabbage and pot-herbs." Mary Ward, when she makes colcannon at her house in Nenagh, County Tipperary, starts with a trip to the kitchen garden, armed with a basket and a pair of shears. This is her recipe.

1. Put the potatoes into a large pot, with the larger ones on the bottom, and add water to come halfway up the potatoes. Cover the pot and bring to a boil over high heat. When the water begins to boil, carefully drain off about half of it, then return the pot to the heat, cover it again, reduce the heat to low, and let the potatoes steam for about 40 minutes. Turn off the heat; cover the potatoes with a clean, damp tea towel; and let sit for 5 minutes more.

2. Melt 4 Tbsp of the butter in a large skillet over medium-high heat. Add the kale or assorted greens and cook until just wilted, about 5 minutes.

3. Combine the milk, scallions, and remaining butter in a medium pot and bring to a simmer over medium heat. Cook for about 2 minutes, then add the greens and stir in well. Remove the pot from the heat, cover, and set aside.

4. Drain and carefully peel the potatoes, then return them to the pot. Add the greens and their liquid and mash until smooth, leaving a few small lumps in the potatoes. Season to taste with salt and pepper.

5. To serve in the traditional Irish manner, push the back of a large soup spoon down in the middle of each portion to make a crater, then put a large pat of room-temperature butter into each one to make a "lake." Diners dip each forkful of colcannon into the butter until its walls are breached.

Reprinted from The Country Cooking of Ireland by Colman Andrews. Copyright © 2009 Chronicle Books. Featured on the January 30, 2010 episode

Colman Andrews is a writer and author. The co-author and co-editor of three Saveur cookbooks and five of his own books on food, Andrews is the recipient of eight James Beard awards. He was a co-founder and editor-in-chief of Saveur, restaurant columnist for Gourmet, restaurant reviewer and restaurant news columnist for the Los Angeles Times, editor of Traveling in Style, and wine and spirits columnist for Los Angeles Magazine. He currently serves as the editorial director of The Daily Meal.
Red Rhubarb Amaretto Torte
Lamb Koftas in Tahini Sauce (Lahme bi sayniyi)
Blackberry Doobie
Cacio e Pepe 7-Minute Eggs