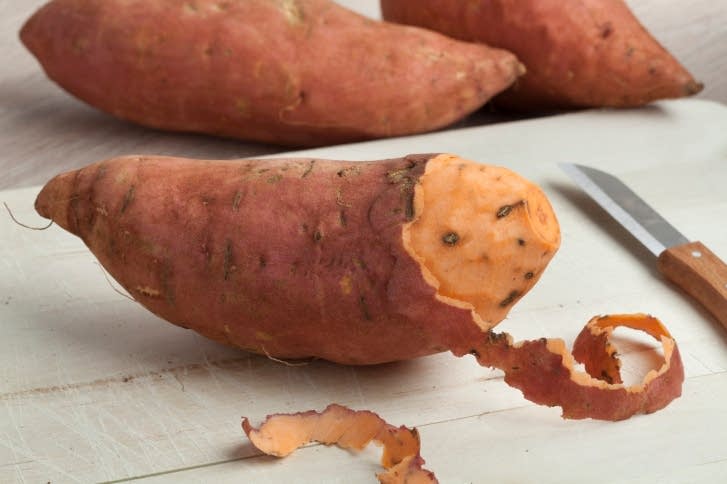 On paper, yams (a.k.a. sweet potatoes) should make a great-tasting salad with a gorgeous golden color. However, my first attempts turned out mushy and cloyingly sweet. The answer to the problem turned out to be to use a combination of roasted yams with boiled potatoes (peeled after boiling, for the same reason), and a brightly acidic lemon vinaigrette to balance the sugary yams. Mint supplies a fresh note, but cilantro or parsley can be substituted. Use medium potatoes so they cook evenly and with relative speed.

Make Ahead: The salad can be prepared up to 1 day ahead, covered, and refrigerated

1. Position a rack in the center of the oven and preheat to 400°F. Toss the yam chunks with 2 tablespoons of the oil in a large bowl. Spread on a rimmed baking sheet. Bake, stirring occasionally, until the chunks are tender when pierced with the tip of a knife, about 45 minutes. Cool completely.

2. Meanwhile, place the potatoes in a large pot of lightly salted water and cover. Bring to a boil over high heat. Reduce the heat to medium and cook until the potatoes are tender enough to be pierced with the tip of a sharp knife, about 25 minutes. Drain and rinse under cold water until cool enough to handle. Peel the potatoes and cut into 1-1/2-inch chunks.

3. Combine the lemon juice, mustard, salt, and pepper in a blender. With the machine running, gradually add the oil to make a thick vinaigrette.

4. Mix the yams, potatoes, celery, scallions, and mint in a large bowl. Toss with about three-fourths of the vinaigrette. Separately cover the salad and remaining vinaigrette and refrigerate both until the salad is chilled, at least 3 hours. (The salad and vinaigrette can be made up to 1 day ahead.)

5. Just before serving, toss the salad with the remaining vinaigrette and season with salt and pepper. Serve chilled.

Rick Rodgers is a cooking teacher, food writer, the author of more than 40 cookbooks, freelance cookbook editor, and radio and television guest chef. His recipes have appeared in Food & Wine, Men's Health, Cooking Light, and Fine Cooking, and he is a frequent contributor to Bon Appétit and a blogger at Epicurious.
Tepsi Kebap
Neapolitan Cookies
Golden Fried Rice With Salmon and Furikake
Tagliolini in a Prosciutto and Poppy Seed Cream Sauce