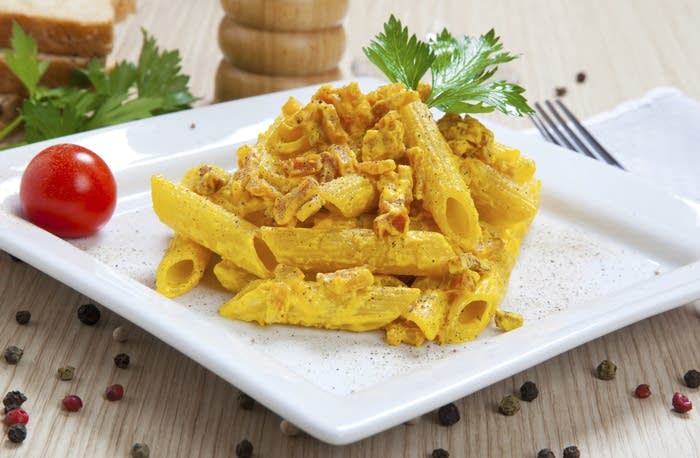 Ravioli and macaroni are medieval Italian inventions, at the time so labor-intensive and expensive that only the rich could afford them. Macaroni such as penne was made in those days by rolling dough around a stick and drying it in the sun. Making pasta dough and ravioli is still time-consuming, so in this modern version of a ravioli recipe from the Middle Ages, I prepare the yummy filling ingredients as small meat patties and serve the patties in a golden medieval saffron sauce with store-bought pasta. The taste is just as spectacular, but with a fraction of the effort.

1. Put the cream and saffron into a deep saucepan and bring to a low boil over medium heat. Lower the heat to maintain a gentle simmer and cook until reduced by half, about 15 minutes.

2. Meanwhile, in a large bowl, mash the bread with a few tablespoons of warm water until pulplike. Add the chicken, pork, 1/4 cup Parmesan, ricotta, egg, parsley, sugar, ginger, cloves, and salt and pepper to taste and mix until well combined. Form a heaping tablespoon of the meat mixture into a small patty about 1/4 inch thick. Repeat with the remaining mixture. You should have about 24 patties. In a large nonstick skillet, heat the olive oil over medium-high heat. Cook the meat patties, turning once, until golden and cooked through, about 1 minute per side. Transfer to a plate; cover to keep warm.

3. Meanwhile, bring a large pot of water to a boil and salt it generously. Add the onion and penne, stir, and cook according to package directions, until the pasta is al dente. Drain and place the pasta and onion in a large serving bowl.

4. Stir the chicken stock and 1 tablespoon Parmesan into the hot reduced cream. Season to taste with salt and pepper. The sauce should be a golden color due to the saffron. If you would like a more intense color, add the pinch of turmeric. Add the meat patties, including any liquid they released while resting. Pour the saffron cream sauce and meat patties over the penne and onion and toss until evenly coated. Top with the parsley and serve immediately.