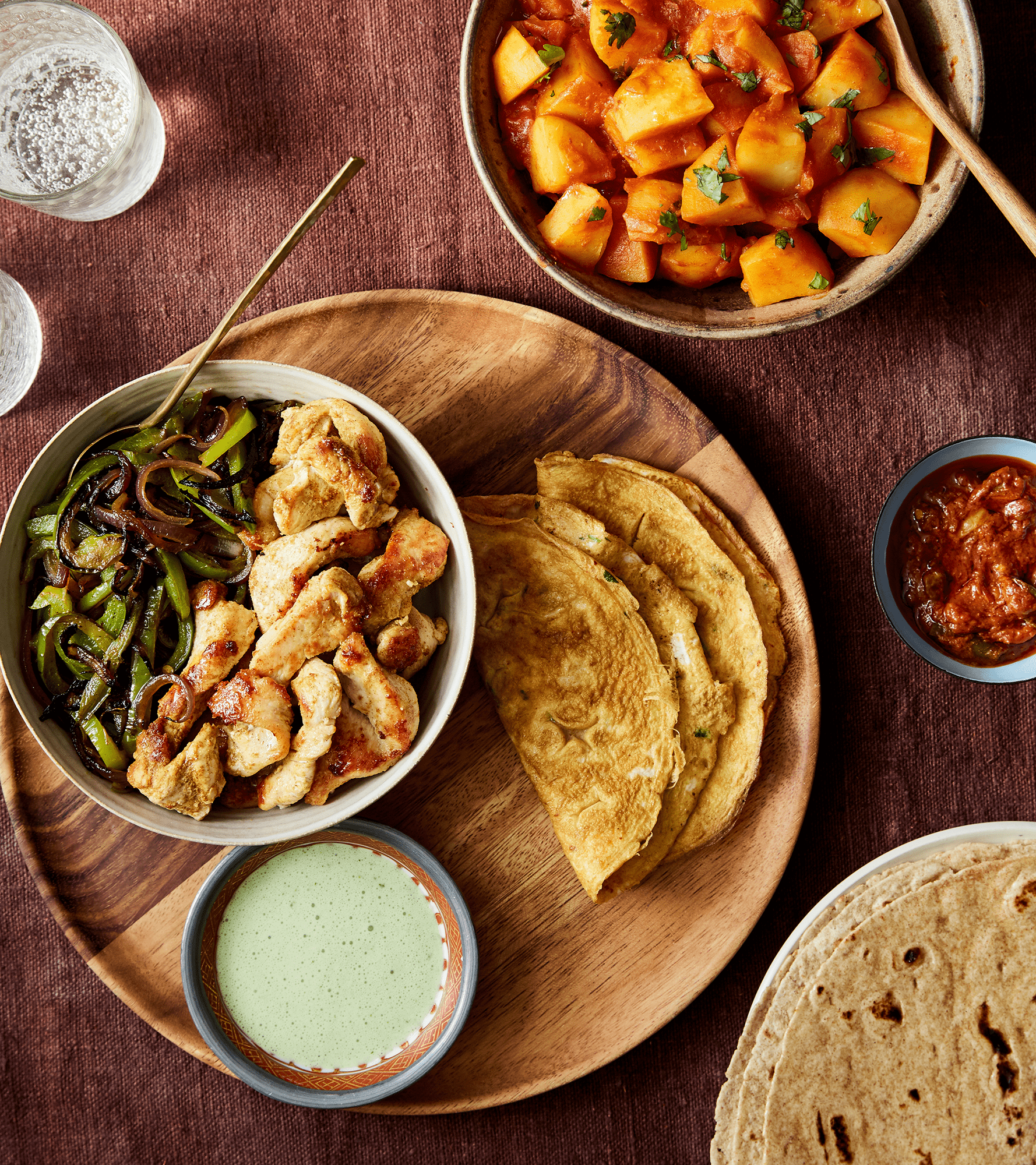 Kati rolls began, the story goes, on the streets of Calcutta (now known as Kolkata), where Kahaani takes place. Meat kebabs were wrapped in flatbread and sold as an easy, portable meal. Kati means “stick” and refers to the skewer on which the kebabs were cooked. Since then, kati rolls have evolved beyond kebabs to encompass hand-held wraps with any number of fillings - India’s version of the burrito.

This fun concept for a lunch (or brunch) party centers around “do-it-yourself” kati rolls. Guests can individualize their rolls by mixing and matching ingredients. There’s the chicken-aloo roll, the chicken-unda roll, the unda-aloo roll . . . the possibilities are numerous.

To get started, purchase a dozen or so roti. If you can’t get to an Indian grocery store, then feel free to use whole wheat tortillas. Warm the bread one at a time on a hot griddle/skillet, or wrap the whole stack in aluminum foil and place it in the oven at 350°F for 8 to 10 minutes. In either case, you don’t want to heat the bread too long or else it will become crispy and difficult to roll.

Set up a “kati roll bar” with the bread, fillings, and condiments. Your guests can begin by spreading a thin layer of mango pickle on the inside of their roti (or skip this step if they don’t like it spicy); then fill with any combination of chicken, potatoes, fried egg, or onions and peppers; drizzle with mint chutney; and finally, wrap the roti into a cylinder.

Kati roll shops are popping up in major cities across the United states, and my hope is that they someday become as popular as burritos. Thank you, Calcutta, for giving us a universally appealing sandwich and a great idea for a party.

This chicken preparation is the central component of your kati roll bar. Placing the onions and peppers alongside the chicken, as opposed to stir-frying them together, allows vegetarians to enjoy them, too. If I’m pressed for time, I’ve been known to buy a rotisserie chicken or grilled chicken breasts at the grocery store to make this recipe even quicker on a weeknight or as a weekend lunch. Just shred the rotisserie chicken or cut the grilled breasts into strips and proceed with heating in a skillet, sprinkled with the spice blend. (I promise I won’t tell anyone you took a shortcut.)

For the onions and peppers:

Cut the chicken into thin strips, similar to fajitas.

In a large skillet, heat the oil over medium-high heat. Once the pan is hot, add the chicken to get a nice sear on the meat. Sprinkle half the spice blend over the chicken. After 4 to 5 minutes, flip the chicken to sear the other side. Sprinkle with the remaining spice blend. Decrease the heat to medium and cook, stirring occasionally, until the chicken is no longer pink when you slice into it, 8 to 10 minutes.

For the onion and peppers, heat the oil in a second skillet over high heat. Once the pan is very hot, add the peppers and onion. They should sizzle on contact. Then add the cumin, turmeric, and salt and cook, stirring, until deeply charred, 5 to 7 minutes.

Remove the chicken to a platter and the onion-pepper mixture to a serving dish. Serve alongside mint chutney and the other kati roll components.