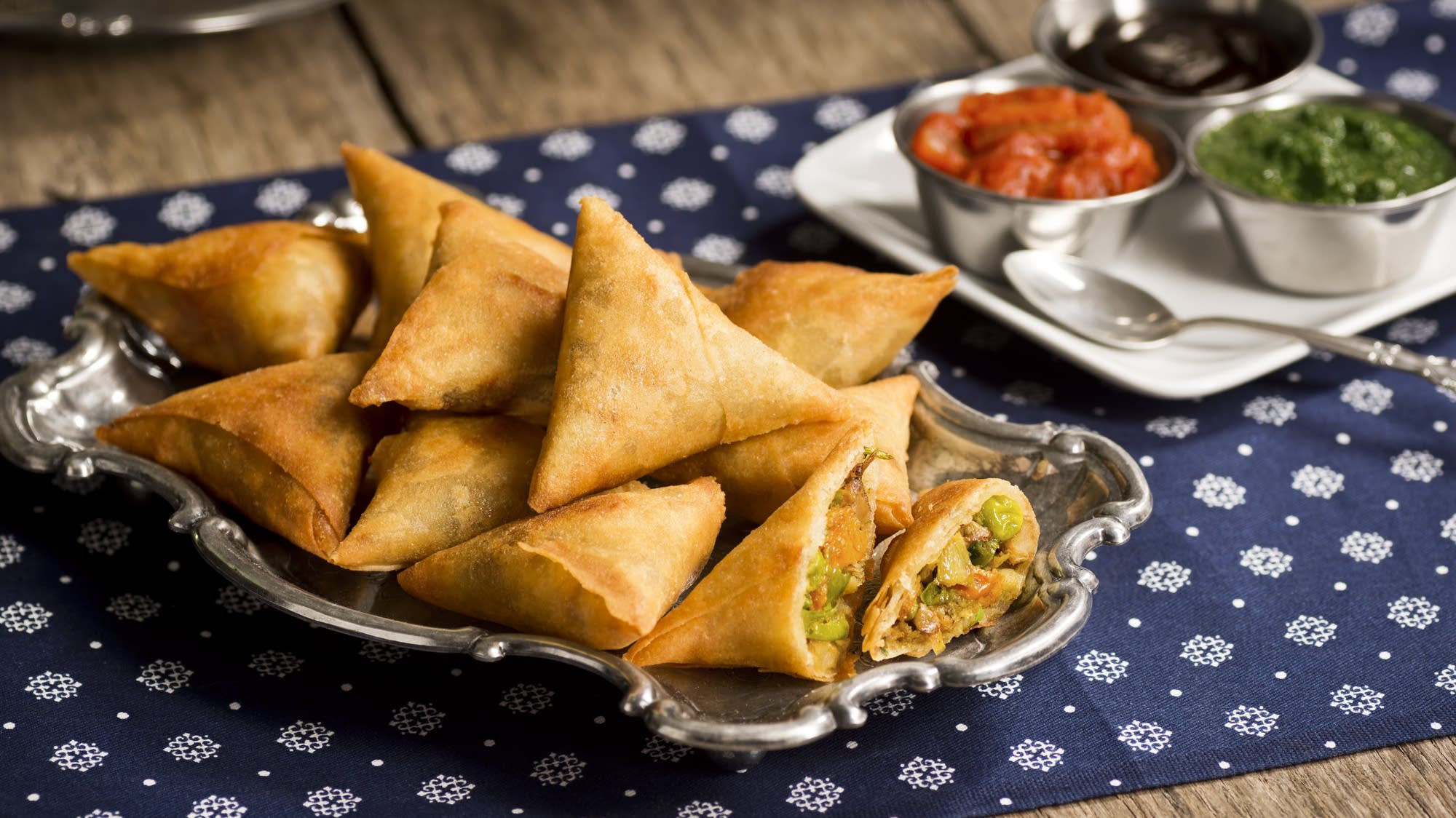 “Don’t be in a hurry,” Ma Sahra says about cooking samosas, the crispy fried triangular pastries that can be filled with anything from spiced chicken and onions (like these) to every kind of vegetable, goat meat, or even fish. Anything can be a samosa! Samosas are also found in Indian cooking, and it’s no surprise that they found their way across the Indian Ocean to Somalia and neighboring countries. They’re sometimes called sambusas, and in Mozambique, you’ll find them referred to as chamussas (Mozambique is home to one of the largest Indian populations in Africa, because the Indian state of Goa and Mozambique were once part of the Portuguese empire).

Put the flour, water, 1 tablespoon of the oil, and a large pinch of salt in a large bowl and stir with a wooden spoon until a dough forms. Transfer the dough to a lightly floured work surface and knead until it is smooth, elastic, soft, and doesn’t stick to your fingers, about 5 minutes. return the dough to the bowl you mixed it in, lightly dust the dough with flour, and cover with a clean kitchen towel or plastic wrap. Set it aside to rest until soft and slightly risen, about 30 minutes.

While the dough rests, place the potato and a large pinch of salt in a small saucepan and cover with cold water. Set the saucepan over high heat and bring the water to a boil. Lower the heat to maintain a simmer and cook until the potato is tender, about 15 minutes, then drain and set aside.

Meanwhile, warm the remaining 2 tablespoons oil in a large skillet set over medium heat. Add the onion, bell pepper, garlic, and Xawaash. Cook, stirring occasionally, until the onion begins to soften, about 5 minutes. Add the chicken and sprinkle with a large pinch of salt. Cook, stirring occasionally, until the chicken is cooked through, about 10 minutes. Turn off the heat and stir in the potato. The whole mixture should be like a rough mash. Let the filling cool to room temperature, then season it to taste with salt.

Transfer the dough to a lightly floured work surface and divide it in half. Use a floured rolling pin to roll each piece into a thin 12-inch square (or as close to a square as you can get). If the dough resists as you’re rolling it, just let it rest for a few minutes before proceeding.

Cut each square into four even strips. Divide the filling among the strips, placing it in a mound at one end of each strip, about 1 inch from the edge. Working with one strip at a time, fold the outer inch of the dough up and over the filling to form a triangle. Take the outer end and fold it down to add another layer of dough onto the triangle. Continue folding up and down in a zigzag to continue encasing the filling in more layers of dough until you reach the end of the strip. repeat the entire process with the remaining dough and filling. You will have eight triangles by the time you’re done.

Line a plate or tray with paper towels and set aside. Heat 1 inch of oil in a Dutch oven or other heavy pot set over medium-high heat until it reaches 375°F on an instant- read thermometer or until the edge of a samosa dipped into the oil sizzles on contact. Fry the samosas, in batches if necessary, depending on the size of your pot, until they are browned on all sides, about 5 minutes per samosa. It’s better to fry in batches rather than crowding the pot. Note that as you add the cold samosas to the hot oil, the oil temperature will drop, so you might have to adjust your heat as you fry. Home frying is a bit of a dance of adjusting the temperature and being patient while things brown evenly. Trust your instincts! Transfer the browned samosas to the prepared plate or tray to drain. Serve immediately, while they’re hot (but truthfully, they’re good at room temperature, too). Leftovers can be stored in an airtight container in the refrigerator for up to a few days and rewarmed on a baking sheet, uncovered, in a 350ºF oven for about 10 minutes before serving.

Reprinted with permission from In Bibi’s Kitchen by Hawa Hassan with Julia Turshen, copyright © 2020. Photographs by Khadija M. Farah & Jennifer May. Published by Ten Speed Press, a division of Penguin Random House, LLC.