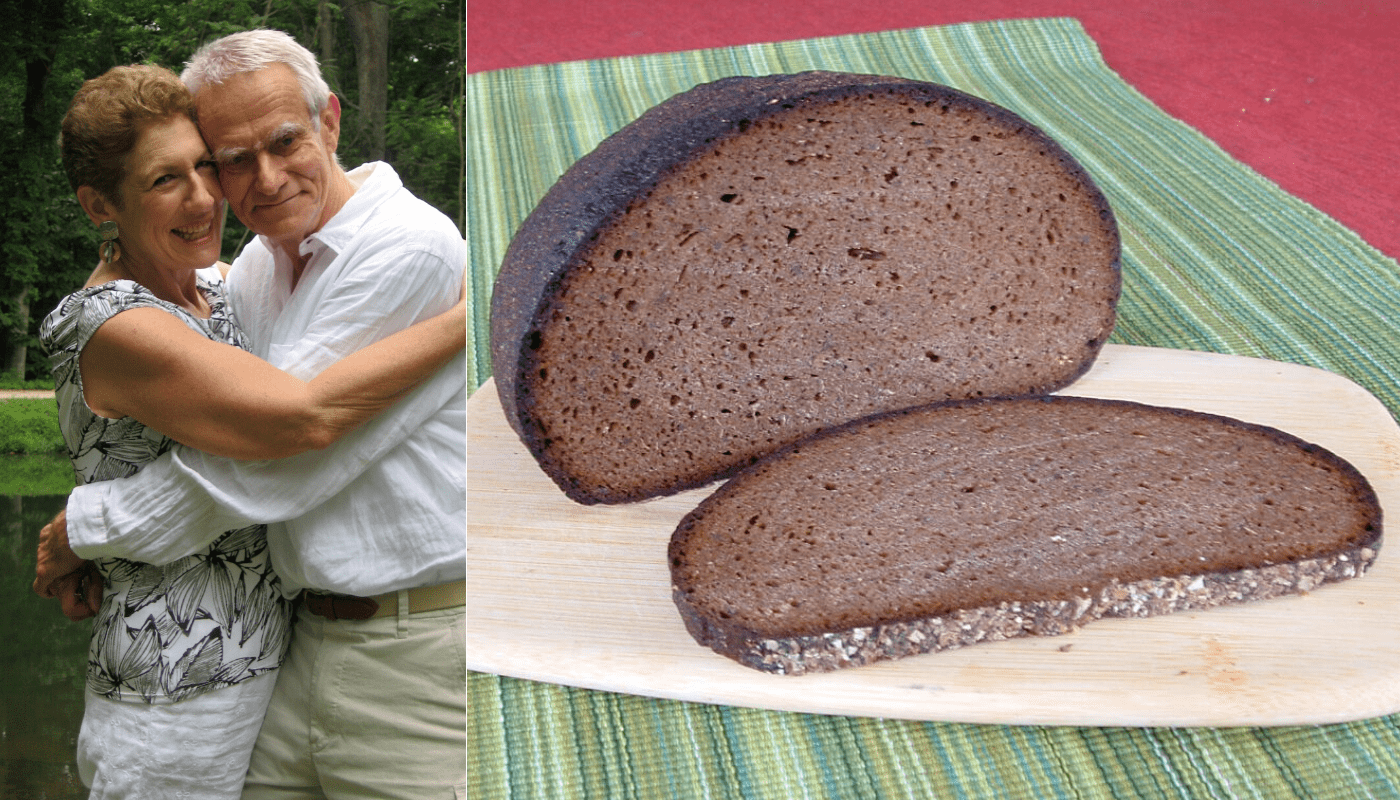 Photo: Michaele and John Melngailis (left) and one of their many shared loaves of rye bread

Have you ever looked at the person you’re in love with and wondered if you really know them? Maybe it’s a quirk, a little thing about their personality that you’ve never minded, or never even noticed. And, that one day starts making you question your whole relationship? Well, the writer Michaele Weissman knows that feeling. For her, it was about the bread her husband eats. This audio essay is an excerpt from her memoir-in-progress called The Rye Bread Marriage. You can learn more about and order John Melngailis's old world sourdough rye breads at Black Rooster Bread. Read more from Michaele in her book, A Cup of God: The Obsessive Quest for the Perfect Coffee.

You wake up one morning married to a stranger who loves rye bread so dense you better duck if a loaf comes sailing towards you.  This bread is solid.  And nourishing.  Think of icy winters and centuries of serfdom.  Latvian rye bread sustained your husband’s ancestors for a thousand years. The gods his people worshipped?  The gods who gave them rye bread. You thought you were marrying a European.  But he is not an Italian or a French man.  He is a Latvian.  Citizen of an overlooked country on the Baltic Sea sent into exile as a child.  One of the world’s perpetually homeless.   And you?  Your so safely American. Born in a time of peace in a land of plenty. Yes your Russian Jewish grandparents survived on rye bread in the old country. But in America, they ate mile high, overstuffed, hot pastrami sandwiches -- the bread, a mere afterthought. Your husband prefers open-faced sandwiches on Latvian rye bread with one slice of meat. You both love food. That is true. But he hates excess. You think in time, he will become like you.  You are shocked to realize that he wants you to become like him. You ask how you came to marry a man so different from you?  The answer never varies. You wanted to be near him.  You felt compelled to be near him.

We met at a party in Cambridge, Mass. He was 28.  A grownup with a PhD and a career. I was 20, a rising college senior, working a nothing summer job. The chemistry was immediate. He called the next day. On our first date we vroom-vroomed north to a lake in New Hampshire.  We swam, he built a fire and grilled lamb chops. Then he opened a bottle of Chateau Lafitte Rothschild 1963. A bad year, but a very good move. I was a student of history. He was history’s victim, having been born in Latvia in 1939.  In October, 1944, to escape the Russians, his family fled westward, going first to the Sudetenland, then to Southwest Germany near the Swiss border. For five years they lived in a Displaced Persons camp.  I thought our romance was a prelude to the glamorous life I would live after I graduated. It never occurred to me that John was thinking marriage.

We broke up. He married someone else and had two daughters.  I moved to New York and wrote a book.  In my early thirties, out of the blue, John called me.  He was getting divorced.

He showed up at my door with a bunch of yellow freesia.  He was handsome as ever.  This time I said yes.

As to Latvian rye bread: My mother-in-law, a former pharmacist, was known for her amazing sourdough starter.  The first time we met, she served her rye bread.  I understood the way I responded was a test of my suitability as a daughter-in-law. I lied and said I loved her bread. In truth, I didn’t get it.

John and I married and had a son.  When his mother died, John ordered rye bread from a Latvian guy in Harford. Ten loaves cost as much to ship as two. When the bread arrived, John piled the extra loaves on our small son’s bright yellow wagon. The two of them went up and down the streets of our neighborhood hawking rye bread.  Turns out, John had a knack for selling rye bread.

Marriage surprised me. The way anger escalated surprised me. The rage I felt about the used nuts and bolts and broken dishes John could not throw out.  Most shocking to me:  The hatred I saw in John’s eyes when I told him I had thrown away the clogs he bought in Helsinki -- the ones that hurt his feet.

Marriage surprised me in the other way too. The unexpected sweetness.  John played chess with our son and the neighborhood kids in front of our fireplace, then fed them rye bread, sardines and hot chocolate. The very snack relief workers gave him in the DP camp.  Something in John’s manner, made these American kids crazy about rye bread and sardines.

John believed rye bread could cure all ills.  Including crooked teeth. I scoffed. But his intuition was correct. Bone growth is triggered by the “piezoelectric effect.”  Biting into bread that fights back, helps teeth grow straight and strong.

As to chewing: The food writer Maria Speck offered an insight that changed my life. “Chewing crusty rye bread," she wrote “slows me down… It civilizes me.”

John built a market for his bread handing out free samples.  Sometimes I helped. One afternoon, at Zabars, New York’s famous “deli,” a nice-looking fellow, with Finno-Ugric eyes, swung by my display table.

He took a piece of rye bread smeared with sweet butter.  “I know this bread. I grew up on this bread,” he said, a dreamy smile crossing his face. “Can I really buy it here?” he asked. When I said yes, he leaned over and kissed the lapel of my corduroy blazer.  “Thank you,” he said. “I love this bread.” “I do too.” I said; and as I spoke I realized that something had changed: I wasn’t faking. I loved Latvian rye bread.

Now our marriage had a theme. Rye Bread. We ate it, we served it to our friends, we promoted it. Our mission bound us more strongly than ever, but it didn’t erase John’s inability to leave the past behind or my refusal to live inside his past.  At times I could not forgive John for being John.  The same was true for him.  When he got mad, he invariably brought up my most unforgivable act: throwing out the frigging clogs.

If this were a film, you would see pages falling from a calendar, marking the passage of time. And so we come to a sunny Sunday morning, when John’s oldest daughter and our grandson are visiting. Wrapping up a phone call with a student, I enter the kitchen where John is making breakfast. Still. Making. Breakfast. He is slower than he used to be, which drives me nuts. “Teti! Rye Bread!” our grandson calls from the sunroom where he sits on a high chair eating slices of banana and orange. As I chop a shallot for the horseradish sauce, I watch John compose a platter of smoked fish, carefully removing all the bones. I carry the fish and the fixings into the sunroom where our grandson quickly sets to work on a plate of smoked salmon and rye bread. Still no coffee. John makes coffee one beautiful cup at a time.

Finally we are all seated at the table. Light pours in through the windows. I gaze at the abundance.  I look at John.  So many years.  So many meals. So much rye bread. I am touched by his generosity. His never-ending need to share. My heart cracks open and despite differences that will never be resolved, I am Molly Bloom in Ulysses, once again saying “Yes”: “Yes. I will marry you and be with you and care for you and be cared for by you. Yes. Yes, I will.”

From The Rye Bread Marriage by Michaele Weissman