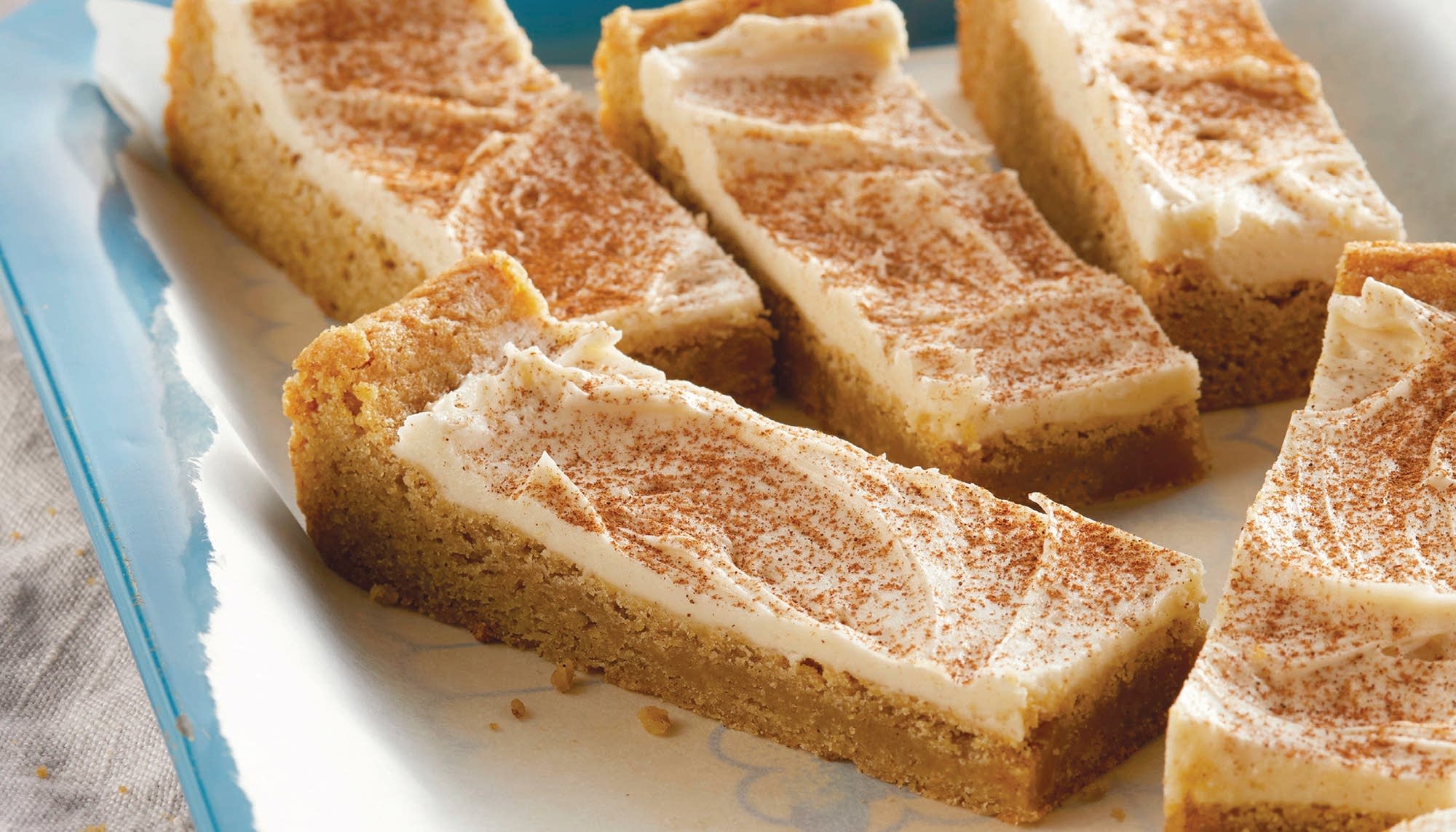 Is there anything more fantastically homey than that most marvelous of soft-baked cookies, the snickerdoodle? The name is thought to have come from nineteenth-century New England, deriving from the word Schneckennudeln, a type of snail-shaped German cinnamon roll. Snickerdoodles are famously associated with the Pennsylvania Dutch and the Amish communities of Indiana, which explains how they made their way to the Midwest and have long been a homespun favorite here.

And, of course, if you can find a way to turn something, anything at all, into a recipe that can be crammed into a 9 x 13, it becomes extra midwestern. The swath of frosting on top gilds the lily here, but it’s so worth it.

*Vietnamese cinnamon (sometimes also labeled Saigon cinnamon) with its sweet-spicy punch reminiscent of Red Hots cinnamon candy, will bump the flavor of these bars from old-school to   something really special.

Position a rack to the center of the oven and preheat it to 325°F/170°C. Line a 9 x 13-inch/23 x 33 cm light-colored metal baking pan with aluminum foil and spray it with nonstick cooking spray.

Prepare the bars: In a medium bowl, whisk together the flour, cream of tartar, salt, baking soda, and cinnamon.

In the bowl of an electric mixer fitted with the paddle attachment, beat the butter on medium speed until creamy. Add the brown and granulated sugar and vanilla and beat until light and fluffy, about 3 minutes.

Beat in the eggs, 1 at a time, giving each about 30 seconds of beating to fully incorporate. Beat in the milk. Reduce the mixer speed to low and gradually beat in the flour mixture. Finish stirring the batter by hand to make sure every is incorporated.

Spread the batter in the prepared pan and smooth the top. Bake for 25 to 30 minutes, or until the top looks puffy and beginning to turn golden. Rotate the pan 180 degrees, and while doing so, rap the pan on the oven rack until the bars deflate. Bake for 5 minutes more, or until the bars have pulled away from the sides of the pan and a toothpick inserted into the center comes out clean. The bars will still look quite soft. If they’ve puffed back up during the last minutes of baking, rap the pan on the countertop once again. Let cool completely in the pan set on a wire rack.

Prepare the frosting: In the bowl of an electric mixer fitted with the paddle attachment, beat the butter on medium speed until creamy. Add the confectioners’ sugar, cinnamon, milk, vanilla, and salt, and beat until smooth. Raise the mixer speed to high and beat until very light and fluffy, about 2 minutes. Spread the frosting over the cooled bars. Finish with a light dusting of cinnamon over the entire pan, if you wish. Store any covered in the refrigerator for up to 5 days.

Reprinted with permission from Midwest Made © 2019 By Shauna Sever, Running Press