The League of Kitchens brings you into kitchens of the world

by Francis Lam
Listen: The League of Kitchens brings you into kitchens of the world
14:25 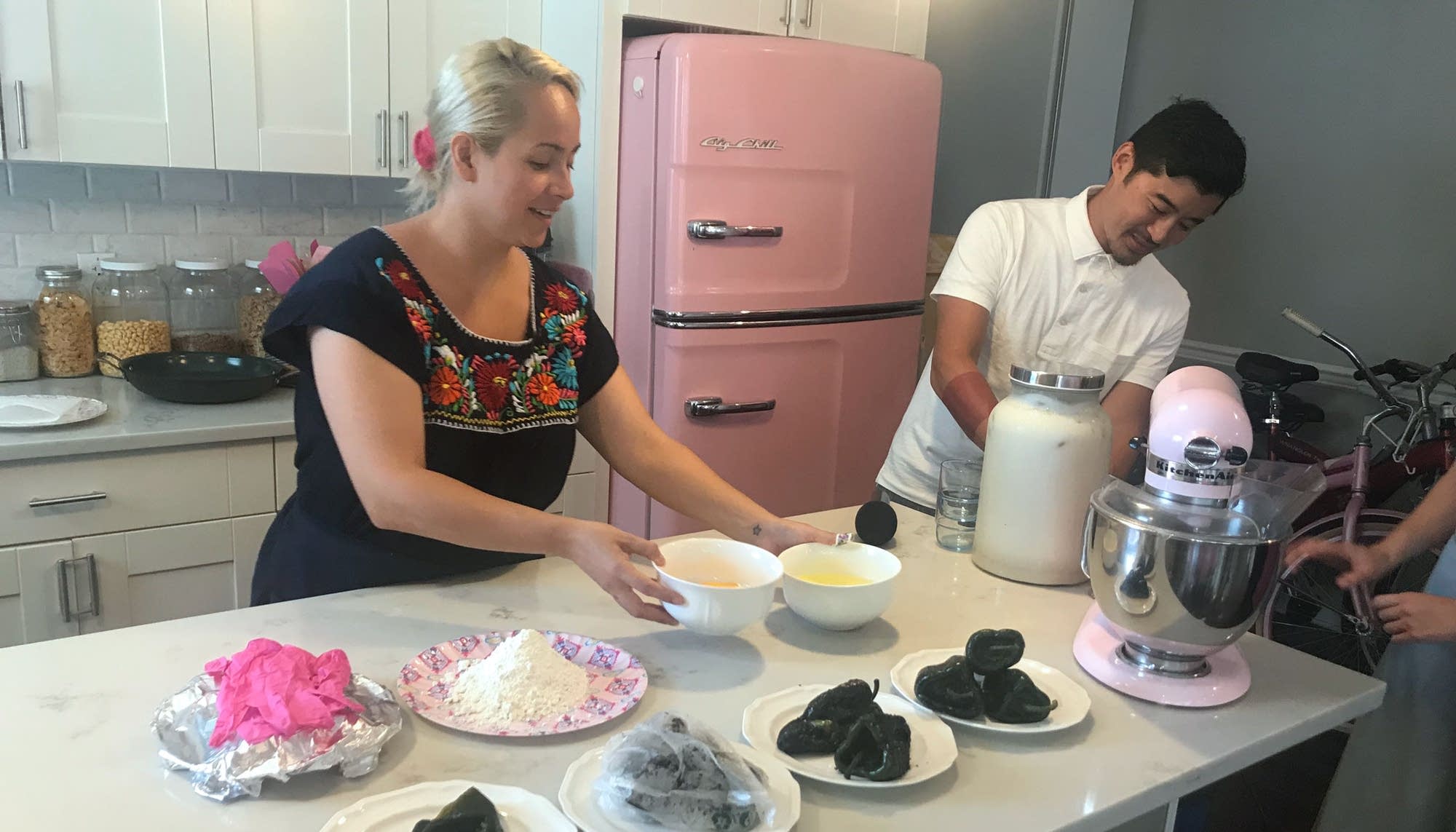 The League of Kitchens has a unique way of teaching people about the food of other countries. Instead of selling international foods, it sells cooking classes led by women, mostly grandmas, from many cultures. So if you’ve ever wanted to learn to cook from a Greek or Argentine or Lebanese grandma, they’re who you call. But in doing so, they’ve given these women a way not just to make an income, but also a way to for them to represent their cultures, which they’re all so proud of. Francis Lam visited the home of a League instructor, Angie Vargas from Mexico, and spoke with organization founder Lisa Gross while learning a lesson in chiles rellenos from Angie. Use her recipe to make your own Chiles Rellenos (Stuffed Poblano Peppers) at home.

Francis Lam: Angie, Lisa, thanks so much for having us.

Angie Vargas: Thank you so much for coming to our house.

FL: This is the pinkest place I’ve ever been my entire life.

FL: It all makes sense. Here we are, as Angie said, in her house. Lisa Gross is with us; she is the founder of League of Kitchens. Lisa, have you ever taken this class from Angie?

Lisa Gross: Oh yeah. A big part of hiring all our instructors is we do 40 hours of paid training where we help them craft their workshops and practice and coach them and write down all their recipes, so I’ve cooked a lot with Angie. I love doing it and love eating her food.

FL: I’ll be the real newbie and you can be the head of the class. Angie, you’re going to teach us how to make chiles rellenos.

AV: Yes, chiles rellenos. We’re going to stuff them with cheese. Then I have frijoles charros, green rice, what else? I made some flan and ensalada de nopales, so we’re having a whole meal.

FL: Let’s get to it, starting with these beautiful poblano peppers.

AV: Yes, these are poblano peppers. They’re raw. They’re pristine. We’re going to burn them in the fire – straight in the fire – until they become charred. Let’s start the fire up on high, and then you’ll grab your chili. I always use tongs, and I put it straight in the fire. When you’re burning your chili, try not to burn the stem because you want to hold it from there when you’re cooking it. Try not to burn it; sometimes it does burn but try not to. They smell very nice when they’re cooking.

And then after this, when they are very charred, like black, we are going to put them in a steam bag so the steam can help us lose the skin. We are cooking the chili and peeling the skin, so hold the tongs and turn it little by little until they’re black. [Sound of stove burner and pepper crackling]

FL: One thing I really love about doing this is you see the skin puff, and they’ll bubble.

LG: I think this is also one of those dishes where when you have it at a restaurant it feels maybe intimidating to make at home, but then cooking it with Angie and her normal New York City kitchen, you’re like, “Oh yeah, I could do that.”

AV: Once you see it, you see that it’s not complicated. I always tell my students to cook with love. If you’re cooking happily and making food for your family, you won’t get that scared. So now they’re black – very nice. They look very charred.

FL: They’re blackened all over.

LG: And how long do you generally leave them to steam?

AV: For about five minutes or so. It’s not that long. But here I have some that I’ve charred and steamed already. Using a glove I’m going to peel one very fast so you can see. It’s very easy. The skin just comes right off.

AV: Yes. Very simple. If you wait longer than the five minutes they’re going to cool down and it’s actually better for to peel.

AV: Yes. We are going to mix the egg whites until they’re fluffy. [Sound of hand mixer for about 20 seconds] And now they’re ready.

AV: You know they’re ready when you turn it upside down and they won’t come out.

AV: While we were waiting for the egg whites, we finish cleaning the chilies. Remember, you’re going to open it with your finger and take out the seeds from the inside. You peel the skin off and you take the seeds out.

FL: And they’re so tender now, so you just slid it right open with your thumb.

AV: Yes. They’re practically cool now, so you can eat them like this. There are many dishes where we eat chilis like that. Like in the morning, I make eggs with poblano pepper over rice. Now that they are clean and seedless, we are going to take the chili with your hand and grab a piece of cheese. This is white cheese, queso blanco. I like this brand. It’s called Tropical, but you can use any white cheese. In the family my husband loves cheese, so he can finish the whole cheese bar. [all laugh] And he loves this one, so I’ve been using this cheese for a long time.

After you have it with the cheese inside, then we’re going to put some flour on top so the flour can stick the egg. [stove burner clicks and ignites] I’m going to start heating the oil. We need a lot of oil to deep fry the chilis. I like to use sunflower oil. I’ve been using sunflower oil for a long time.

FL: A little nice layer of oil on the bottom, not like a big fat pot full of oil.

AV: No. It’s not like you’re deep frying it in a big pot, but you really want to fry this.

FL: Enough oil to come up around the sides.

AV: Yes. The peppers are stuffed, and now we are going to fold the egg whites with the yokes. You want to mix the yokes first so they’re all mixed.

FL: You’re folding these mixed yokes back into the whipped egg whites.

FL: Just a nice dusting of flour. Rub it on. You held the flour-dusted chili in your hand. You basically spread some of this fluffy egg white batter onto the chili.

AV: Let’s say on half of the chili, on the side that you’re going to put to the oil, and then you spread the other half.

FL: You put it in the pan, and as that side is frying, then you spread the meringue on the other half?

AV: Yes. Put it in the oil. [pepper sizzles in oil] Great. That’s great. And then you cover the rest.

LG: It already smells so good. How do you know when to turn them over?

AV: You want to get a nice golden color. I like to flip it on a triangle like this.

FL: You flip it part way.

LG: Right now, that cheese inside is getting all melty and gooey.

[louder sizzling as pepper is move and flipped]

AV: Once you have a nice golden color you can take them out.

So, now the chilis have finished we are going to serve them with all the sides I’ve already plated here. I have the frijoles charros, the green rice, the ensalada de nopales, and I have for dessert the flan. We are going to pick up the chili from the stem, and then put some beans on the side.

FL: Oh, they’re so good. There are so many things going on. It’s such a simple dish. It’s literally a piece of cheese inside a pepper inside some fried egg, but fried egg batter is so silky. There’s something about the way that it interacts with the pepper and the juices of the pepper, where it is silky and rich in your mouth. You have the green vegetable taste of the pepper, and then you have the chewy cheese in the middle.

AV: Oh yes, this is heaven.

FL: Lisa, tell me what led you to start League of Kitchens?

LG: The idea actually came out of my own experience. My mom is Korean; she immigrated here in the early 1970s. My dad is American of Hungarian Jewish descent, and his family has been in New York City for five generations. It’s like two very different immigrant stories. When I was growing up, my Korean grandmother lived with my family from the time I was born until when she passed away when I was in college. When she passed away all those recipes just went with her. I tried to learn from cookbooks and from the internet, and nothing tasted good as when my grandmother made it. There was always something missing, and I had this realization that there’s always something a little bit left out that you really need to learn from a person. It’s very sensory.

This idea from my early 20s came back to me, and I thought, what if I found grandmothers from all over the world who were incredible home cooks and could teach their family recipes and host people in their home kitchen? It could be as much about cross-cultural learning and exchange and connection as it was about this incredible food and culinary experience.

I’ve been running League of Kitchens now for almost six years, and just in the last year I had this realization that our instructors are culinary cultural lineage holders in their cultures and in their communities. Because, when you think about culinary culture has survived for the last 10,000 years and been passed down it’s really been an oral tradition mostly passed down between women – grandmother to mother to daughter to granddaughter. And I think because it’s been an oral tradition and a women’s tradition it’s often been unseen and undervalued. But our instructors, they’re all incredible experts who really learned from their grandmothers and mothers and are incredibly knowledgeable, and I feel like that’s so important to recognize and celebrate and also to value home cooking.

FL: Angie, you’re a natural teacher. I think one of the things that’s important about being a teacher is to be comfortable performing, but performing in a way where you’re not just giving, where you’re also listening and interacting.

FL: What do you hope students get when they come to your classes?