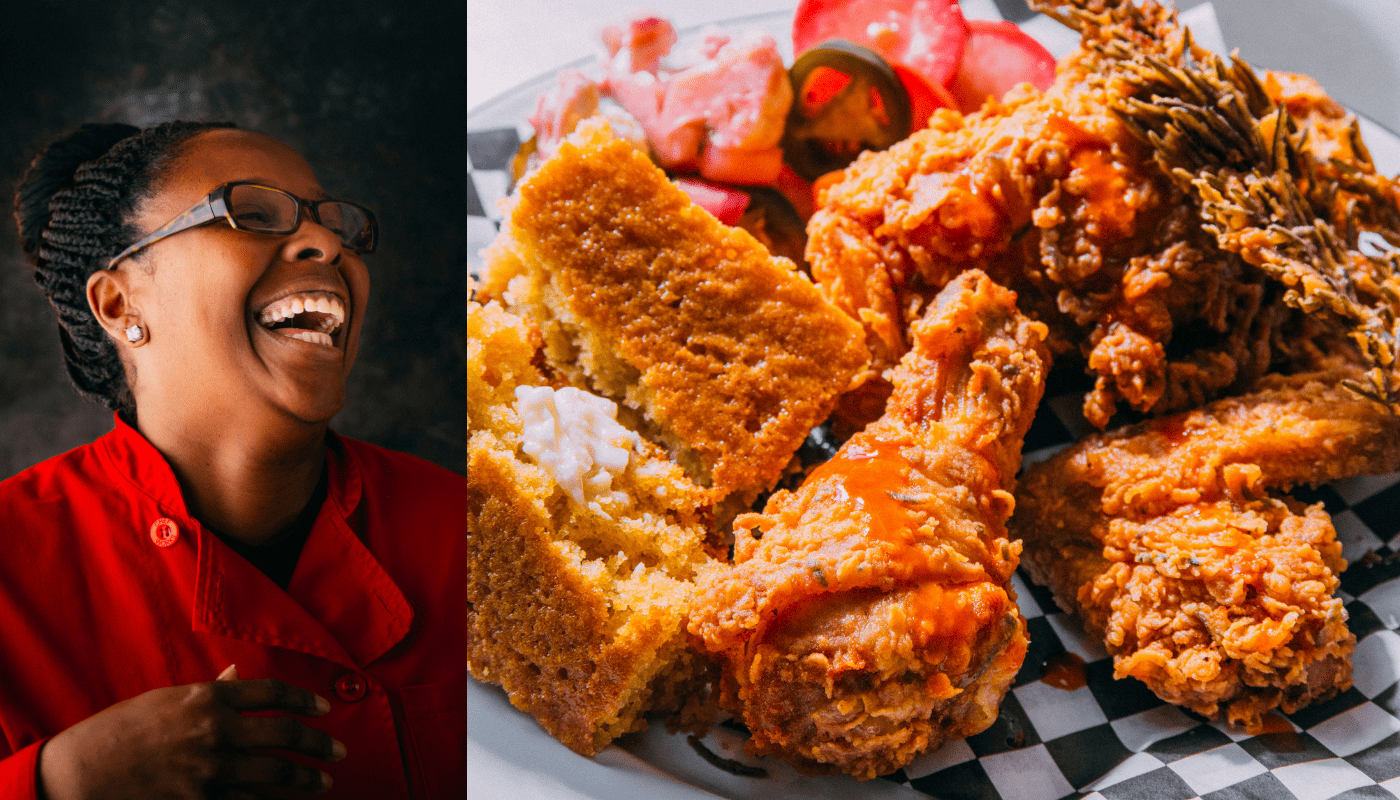 Fernay McPherson is a lifelong resident of the Fillmore neighborhood of San Francisco, a once predominanty African American neighborhood that has gone through a lot of changes since she was growing up there. To keep some of the area's food memories and traditions alive and strong, Fernay started a food truck called Minnie Bell's Soul Movement. From a food truck to a vendor spot at Public Market Emeryville, and now into a more permanent restaurant spot at the market, Fernay has made a name for herself and her food all around the Bay Area. She talked with Francis Lam about some of her struggles and why community support is key to her success. She also shared the recipe for her wildly popular Rosemary Fried Chicken, which you must try!

Note that at the time of the interview the larger restaurant space of Minnie Bell's Soul Movement had not yet opened. It opens Monday, August 12, 2019 at 5959 Shellmound Street, Emeryville, CA.

Francis Lam: Fernay, thank you so much for having us.

Fernay McPherson: Thanks for coming.

FL: This is exciting. We are in the space that will be your first permanent location.

FL: In a few weeks this tarp is going to come off the front and it’s going to say Minnie Bell’s Soul Movement across the front. I want to ask you where does that name come from?

FM: Minnie Bell’s is a combination of my great-aunt – her name is Minnie – and my late grandmother; her name was Lilly Bell. They were my inspiration to cook, so I felt like it was only right to name the business after them, and that was my way of taking them on this journey with my. My aunt is 86. She is still here, I’m still able to call her, she’s still able to taste my food. Last year when we opened here it was three days before her birthday, so we had a soft opening with just family for her birthday, which was amazing.

FL: Is your food meant to taste like hers?

FM: My food is inspired by a lot of things that I grew up eating. I put my little twist on some things, but everything I cook is pretty much from my childhood.

FM: My twist is the rosemary. We have are signature rosemary friend chicken, and the rosemary adds this unique flavor and freshness to chicken that you can’t get anywhere else but at Minnie Bell’s. So, you have to come here to get it.

FL: You’re good at selling too. [laughs] How do you use the rosemary in the chicken?

FM: The ‘Soul Movement’ came about when I – because I started with a mobile trailer, and it was just may way of having soul food on wheels, like we’re moving. We were at different places at the time. We did some off-the-grid rotations, private events. It was that little twist on being mobile. I kept it even though we’re not mobile. It turned into a rosemary friend chicken movement. [both laugh]

FL: This is the wave that’s taken over.

FL: You started your food business with a trailer, like a food truck, but you were also a bus driver at one point, so you know San Francisco in the way only a bus driver does.

FM: I do. I only drove the bus for two-and-a-half years. It was a pretty intense job. You dad to have tough skin. I drove the bus and I did Minnie Bell’s part-time, and it just became really tough for me to do: being a single mom, having a business, working part-time. So, I decided to make a decision, am I going to work or am I going to operate my business? And I knew it wasn’t going to be driving a bus. In 2014 I chose to leave my job and take on my business full-time, and I haven’t looked back. I don’t even ride the bus anymore. [laughs]

FL: You were born and raised in San Francisco.

FL: In the Fillmore neighborhood.

FL: And then when you started your own business in that trailer many years later it was in the same neighborhood. But it had changed. Tell me what happened.

FM: It changed. I grew up in the Fillmore, and it was a predominantly African American neighborhood, and it definitely started to change.

FL: It was actively bulldozed, right? There was a lot of active displacement in the neighborhood.

FM: That was a little before I was born. That was redevelopment that came in and bought out a lot of the homeowners and turned a lot of those places into more affordable living. But it stripped the wealth of African Americans in the neighborhood because they sold off their property. Those properties could’ve been worth millions now, but they put in a lot of housing developments which are still there. So, that was a little before my time, the redevelopment; my parents were displaced, my grandparents, everybody was displaced during that time.

When I was growing up it was still a predominantly African American neighborhood, but the homeownership and the business ownership was not as vibrant as it was. I always say that right now it is gentrified, but it’s bittersweet for me. Because I grew up in the heart of the crack cocaine epidemic, so the neighborhood was declining not only from people being displaced, but also people losing their lives to that addiction. It was a lot of crime, but it was also still love, family and community, which we don’t have anymore. The bitter part to me is losing that community, losing that love, but we don’t have as much crime. Even in the midst of that crime I always felt safe because I was surrounded by people who loved me – my family, my friends, my community. So, it’s bittersweet.

FL: What happened then when you started selling food in the neighborhood?

FM: It’s like that love. Everyone would come to the house, get their plate – whatever I was selling for the day. The community organizations, the community centers would bring me in and teach some cooking classes to the youth. They would have me cater small events for the community. It was a lot of support in the community when I came out of culinary school, and I still have that support. They still reach out for catering. They come over here and eat.

FL: We just drove from San Francisco here, and it was easily 45 minutes.

FM: Yeah. I do that commute every day. People still travel from San Francisco to come over here, which is the amazing part for me because not only have I developed that following here in the East Bay, my family from San Francisco still comes over and supports me. I just had some of the guys from the neighborhood come today.

FL: And your great-aunt is still here.

FM: My great-aunt is still here. She loves the food. We were at church and we had a Mother’s Day program, and it was me that needed to talk about the food, and I talk about how people come and tell me, “Your food is great, your food is wonderful.” But the thing that means so much to me is when my aunt eats the food and tells me I get better and better. She tells me all the time. Like at family dinners, “Oh, you make this dressing? Girl, you getting better and better.” I’m like, yes, yes, yes. I’m doing something right.

FL: Now that we’re standing in this space, and you’re about to open your permanent location, what does is feel like? It’s only a month from now, right?

FL: How do you feel? Are you excited? Are you nervous?

FM: It’s exciting. I’m nervous. I want to make sure we open when I want it to open, and that everything is in place that I want to be in place. I aim for perfection in everything that I do, and I have to understand I’m not always going to get that. This is my first time opening up my own space. It’s not much that needs to be done in here, but it is a few things. When I went into my pop-up, everything was there, so now I have to bring in that contractor to do different things. That part’s a little scary for me, and also taking on the responsibility for a long term. My pop-up was one year, but now I am in a long-term lease, and that’s a little scary. I don’t let my fears overcome me because I can’t succeed that way. I just keep pushing. I seek those resources. I’ve always seeked resources to help me since high school, and La Cocina is was one of those, so I would just be on the phone like, “Hey, guys, I need you.”

FL: Thanks so much for having us, Fernay.

FM: Thanks for coming. I appreciate you all.