by Sally Swift
Listen: Nicole Rucker shares delicious ways to use an abundance of summer fruit
11:17 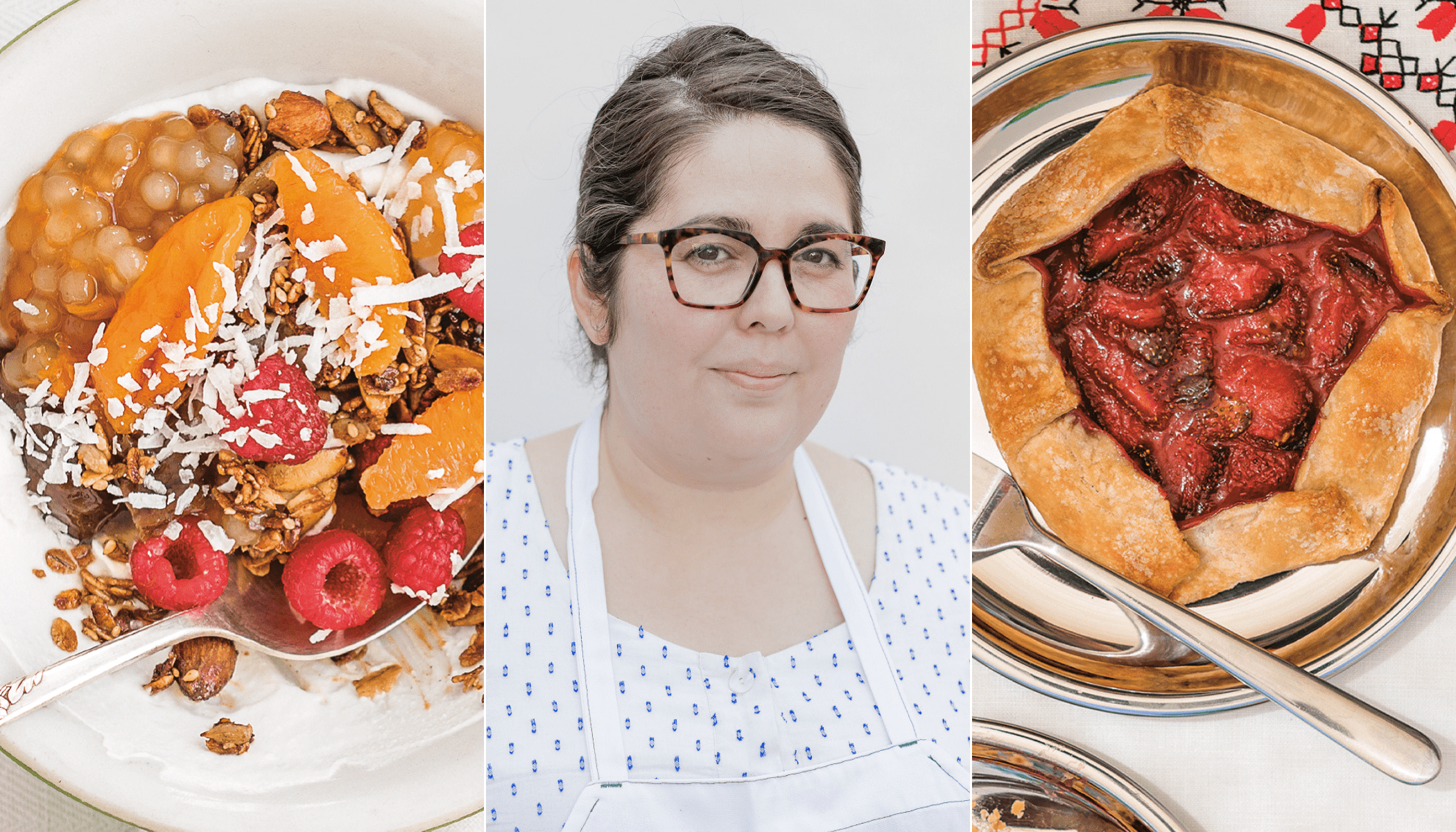 We are in the throes of summer fruit season, when the markets and farm stands are teeming with many different kinds of berries and stone fruits. And if you’re like us, you may go a little overboard. So, we brought in an expert to help put all of that beautiful fruit to very good use. Nicole Rucker is a fruit whisperer of sorts. She's a star pastry chef in Los Angeles, the chef-owner of Fiona, and has just written her first cookbook called Dappled: Baking Recipes for Fruit Lovers. Nicole shared some of her favorite tips with our Managing Producer Sally Swift. She also shared her recipes for Strawberry Galettes, Banana Cream Pie and Fruit Soup.

Sally Swift: I have to admit that I’m a little intimidated by you because I’ve just discovered that you’ve won KCRW’s Pie Contest, how many times?

Nicole Rucker: Technically, one year I won, but I did in one fell swoop and won four awards at once. The downside is I’m not allowed to go back and compete anymore. [laughs]

SS: I was so interested to be reminded in your book about which fruits ripen after you pick them and which ones absolutely do not. Can you talk us through the ones that you pick and the continue ripening; there’s a name for them, right?

SS: The list that does not ripen, I’m going to read it for you because this is kind of stunning: blackberries, blueberries, cherries, citrus, figs, grapes, pineapple, pomegranate, pumpkins, strawberries and watermelons. I’m sure I’ve never had a ripe pineapple.

NR: Most of us haven’t, unless you been to a really wonderful location that has ready-to-go, ripe pineapples most of us have not had a truly ripe pineapple. It’s like honeydew and other melons. They get throw into a smoothie or a fruit salad and they don’t really think about it, but a ripe pineapple is fantastic.

SS: Will you explain for us how you would keep some of those very fragile things that need to be harvested ripe. For example, how do you keep a beautiful container of blueberries?

NR: Blueberries are one of those things that you can take and stick in the fridge because they are going to be ripe and delicious – if you don’t eat them all on the way home. And they are not as fragile when they are ripe as a fig or a peach. If you get a peach off the table that’s already ripe it’s going to be ruined by the time you get home, unless you store it in one single layer and you really baby it. If you think about beautiful photos that you see of peoples' travels to Europe and everyone takes that classic photo of the market they walk by, and all the fruits are laid out in these really beautiful grids – they’re all in one layer and they’re flat. Figs are a big one if you get them and they are gorgeously ripe and laid out in one layer, they’ll stay much better, but if they are piled on top of each other they’re going to get smashed. Same thing with perfectly ripe strawberries; as soon as you can get them home, if you can put them in one single layer, you’ll get more longevity out of them.

SS: Speaking of those precious things, I want to run through two ideas with you. One, if you’re going to do one super-extravagant recipe out of this book, which one would it be?

NR: I would probably make the Blue and Black Pie. It is an expensive pie to make, especially if you get huckleberries. But blackberries are also expensive when they great, and blueberries are precious and you put a lot of them in the pie shell. Plus, an all-berry pie can be risky for novice cooks, so it is one of those things that could turn out like soup if you don’t cook it long enough and properly. It’s looking for the signs of doneness. One of them is that it needs to be boiling – bubbling and literally boiling – before the starch can be activated to the point where it’s going to set when it’s cold. Everything is dependent on their components. The sugar seasons and makes it taste better, even though fruit is delicious and ripe. Sugar also draws out the juices from the berries, and that creates liquid which needs to be suspended and held together or else you’re going to have a fruit soup situation. You need a thickener, and the starch is that thickener, but it needs to be brought to a certain temperature for a certain amount of time in order for it to really do its things and get plumped up to hold the juices. It has to boil. So, you look for the pie in the oven – especially a berry pie – to be bubbling. If it’s a double crust then you put vents in the top and evaporation can’t escape as easily. But if it’s a crumble top and you don’t pack it in then you have a lot of spaces for evaporation to happen and for the boiling juices to bust out of the top and give you the signs that say that they’re done and they’re ready and it’s safe to pull out the pie.

SS: I have never heard anyone explain it that way before. That makes total sense that you’d have to have it boiling to get the starch into the right place. I’ve heard people say you should drain the berries, take that juice and boil it down and then add it to the berries then add it to the pie, which is one way of doing the same thing.

NR: I’m way too lazy for that. [both laugh] Sounds like a lot of work. It’s summer; we don’t have that kind of time. It’s hot!

SS: On the other end of the spectrum, what would be a really simple recipe for people to use?

NR: I would choose simple and also a little bit unusual. I really love the tapioca fruit soup recipe. It’s my mother-in-law’s recipe. It’s called fruit soup, but it’s really a tapioca pudding made with dried fruit, which is shelf-stable and also highly underappreciated. Especially in the United States, we don’t eat enough dried fruit other than raisins, which get such a bad rap. Dried fruit is good to use because it makes the most of our resources, and if someone’s gone through the trouble of drying the fruit and it still has tartness and sweetness, they’re saving something from a compost bin. So, the fruit soup is a tapioca pudding with dried fruits in it. Then it also gets a little bit of spice. You boil the tapioca in this fruity liquid and then you chill it, and you have this tapioca pudding with dried fruit in it that’s cold. It holds well. You can serve it with yogurt. My mother-in-law likes to serve it with cream and cookies for dessert, which I don’t think anyone in her immediate family appreciates as much as I do. [laughs] Because they’re not nerds like me. Everyone is stuck on chia, which I get, but tapioca is like chia’s older, more experienced relative. The fancy, weird, Birkenstock-wearing older relative. Birkenstocks with socks, probably.

SS: You have a technique in your book for making fruit scrap vinegar.

NR: I think we’ve lost touch with how vinegar is made, but we use it a lot. Everyone loves salads and buying fancy vinegars. Essentially what you do is you take some scraps and you mix them with a little bit of water and maybe a little bit of sugar if they need it and you let it sit and that ferments. The fermentation makes it alcohol, and then when the alcohol has gone through its life cycle and has absorbed enough ambient elements – you leave the lid open, sort of like making a sourdough starter – then it turns into an acidified product. Now, the alcohol is dead, so the absence of alcohol is then the vinegar-y element. Hopefully you have gathered a little colony of bacteria in there that create the mother and if not, you can add a little bit of an unfiltered apple cider vinegar just to get it started, and that turns into vinegar.

SS: And you’re talking apple peels and scraps of fruit you have laying around.

NR: I like to keep them separated so that you can taste the characteristics of each fruit. I’ve had great success with apples; obviously apple cider vinegar is very popular for a reason and I think that’s because it’s a hardy producer of vinegar. I’ve also had success with peach vinegar and nectarine vinegar, but that doesn’t last as long in the color and flavor; it’s more of a fresh product that you need to use more quickly, or you can mix it with sugar and drink it as a shrub. Everyone is so into shrubs these days; this is like next level shrub territory. Blackberry was a little bit harder for me to work with, but apple is the easiest entry-level one to make.