France has a complex relationship with le doggie bag

by Judith Kogan
Listen: France has a complex relationship with le doggie bag
07:49 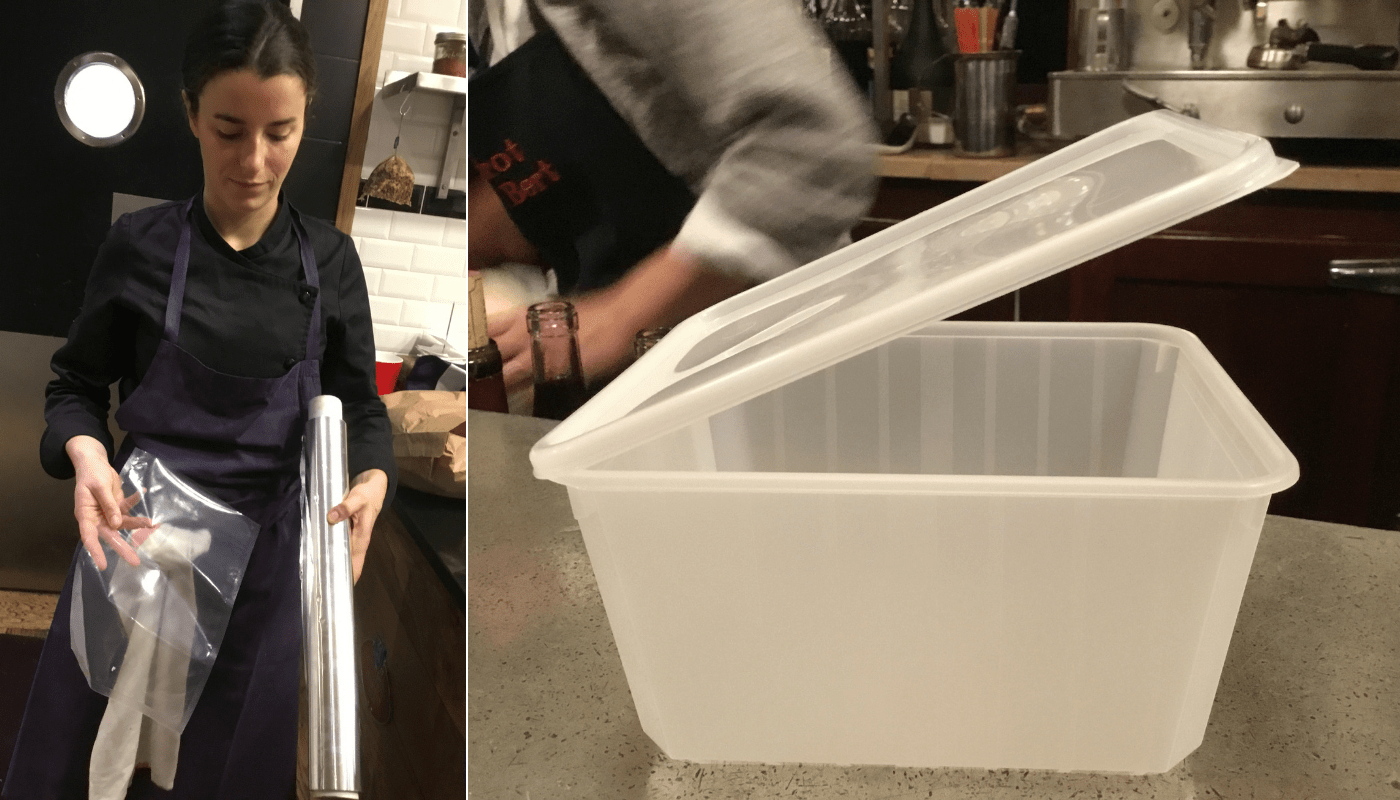 Restaurant food waste is a worldwide problem that’s led to economic, environmental, and social woes. In many countries, the problem is reduced by allowing diners to take their unfinished food home. But one country resists this trend. Field reporter Judith Kogan brings us this story from Paris.

French restaurants produce a million tons of edible waste annually. In a national poll, 75% of French people agreed that letting diners take food home is a good idea. The French hospitality association has encouraged restaurants to pack up leftovers for diners who ask for it. But the French can’t seem to ask for, or offer it.

ROSA: The French mentality is that way. They prefer to throw it out.

I’m talking to Rosa, an employee of a Parisian Starbucks.

ROSA: It’s possible to take a doggie bag, but many restaurants say no, they don’t want to.

Rosa asked Michael, the man standing next to her, what he thinks.

MICHAEL: If you’re paying for your food, if you not finish in the restaurant, for me, it’s logical you can take the rest at home or at your office.

Restaurants have told Michael it was impossible.

MICHAEL: I’ve heard the excuse they didn’t have a box or bag for it.

Of course, I want to know why they would make such an excuse.

To understand the French resistance to le doggie bag, you need to understand a bit of French history and culture. The first thing the French like to point out is that portions are smaller in France than in the United States, so it’s easier to clean your plate. And if food is left over, you wouldn’t want to draw attention to it.

YOANN: For the French people, it’s impolite to ask to take food home. Because you are supposed to eat everything on your plate at the moment.

YOANN: At some point, most people of the family – grandparents – they remember when there was nothing to eat. If you take something on your plate, you have to finish it.

For the restaurant, the doggie bag raises quality concerns.

And there are health concerns.

YOANN: We cannot guarantee the product when it is out of our place. If the people will be sick afterwards, if they are eating our food two or three days afterward, it would be our fault, which is not good for us.

But this is a Michelin-starred restaurant. Of course they’re concerned with exacting standards. Is it any different at bistros, the most common place to dine?

I stopped by Bistrot Paul Bert, a classic French bistro, and one of Paris’s most popular. The moment you open the door, the sounds and smells of the bistro envelop you. Over three cozy rooms decorated with white tablecloths and bohemian accents, the sold-out dinner crowd is treated to highly-ritualized preparation and presentation of food and drink.

It’s been this way for generations.

AUBOYNEAU: When I was a kid, my father was a banker. We had a cook at home. My father couldn’t think about lunch or dinner with less than four courses. Impossible! Even in our farmhouse, it was impossible!

Even in remote parts of France, laborers who break for lunch tuck into three-course lunches. And the French don’t snack much between meals. They come to meals hungry. At Bistrot Paul Bert, portions are big. Auboyneau is practical and forward-looking.

AUBOYNEAU: We are not used to take something out of the restaurant. We are not used even to ask for it. But today, foreigners ask. And we do it with no problem. I hate waste.

He stocks plastic containers, but allows only certain foods to be taken home.

AUBOYNEAU: If it’s fish, I always say no. Because of the health. Sometimes it’s summer, I say no because they put in car, it’s 35 degrees, I don’t know where they are going. I agree more on meat than fish, and when they don’t have too much sauce.

The chef sends it home with instructions.

AUBOYNEAU: The name of the plate, and always puts: please put in fridge, please not more than two days.

His French diners never ask to take food home. For them, food is inseparable from the whole dining-out experience. But there’s something else.

AUBOYNEAU: It’s always a problem of shame, I think. With friends, they say: why are you taking that home?

The French fear of looking poor by asking for a doggie bag may have roots in the nineteenth century.

BEIZER: There was a tradition of selling leftover food from higher tables, meaning tables in fancy restaurants and wealthy homes.

BEIZER: It would be sold either to the very poor, because they couldn’t do any better, or to the not-completely destitute, who could have the illusion of being a little wealthier by eating nice leftovers, like lobster claws or some kind of dish like Chicken Morengo, that had a fancy name.

The French tried rebranding le doggie bag. They created a chic design, and called it Le Gourmet Bag. That didn’t help. Rosa and Michael are still at Starbucks.

MICHAEL: Maybe it’s gonna change, but I think it’s gonna take several years or decades. Because of the mentality, and the ecology, it’s not a priority in France.

Auboyneau says that in France, eating at home is changing. But in restaurants, the rituals persist. The French restaurant seems to be something of a theatre, or sacred space. You don’t tamper with the traditions. You go with friends or family, indulge, and leave. With senses tingling … and hands empty.

Judith Kogan is a Boston-based public radio reporter and a big fan of leftovers.