Beyond breakfast: cooking and baking with maple syrup

by Shauna Sever
Listen: Beyond breakfast: cooking and baking with maple syrup
11:40 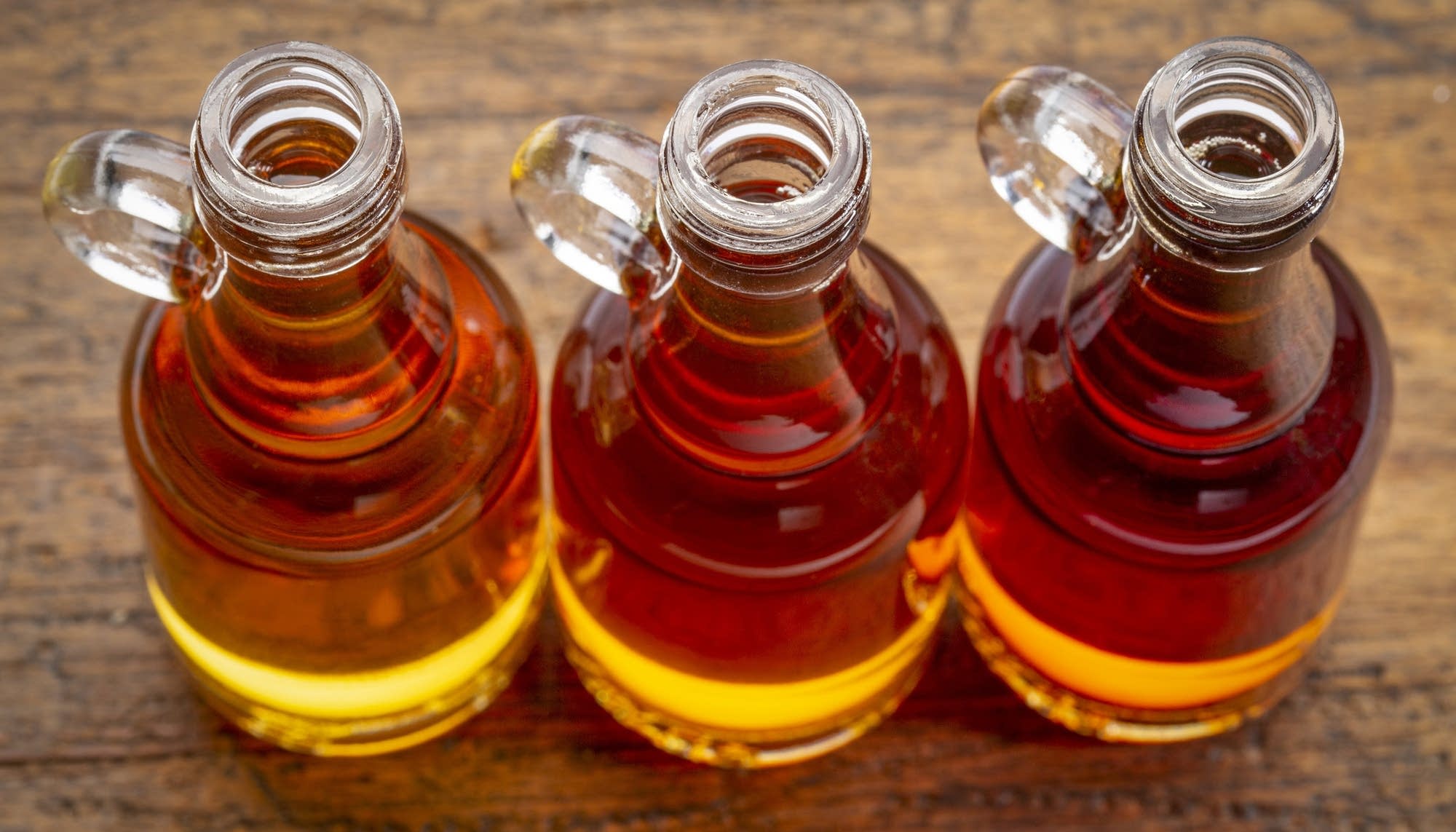 Maple syrup is not just for pancakes and French toast. More and more people turn to it when they want to sweeten something without using refined white sugar. Beth Dooley and Mette Nielsen cowrote the book, Sweet Nature: A Cook’s Guide to Using Honey and Maple Syrup, in which they revel in maple syrup’s magical way of completely transforming a dish. Our contributor Shauna Sever talked with them about simple ways we can all get a little bit of that magic.

Shanua Sever: Using unrefined sugars in cooking and baking has become huge in the food world. I want to know what excites you about working with maple products as ingredients.

Beth Dooley: A number of things. Maple has a distinct flavor, so you can enrich a dish, whether it's a baked food or something savory, by playing with that flavor and paying attention to it. Whereas white sugar or even some of the natural cane sugars really don't have much flavor at all. They're so neutral that you're not really adding anything. And with maple, you're not only sweetening but you're adding an additional flavor.

SS: I love how many savory recipes are in the book. I feel like those are the greatest examples to show off how you use maple as seasoning, in addition to just being a sweetener. It's not like you're using cups of it in order to get the flavor across; you're using it in a smart way. Tell us how you approached using the ingredients.

BD: That's exactly right. And that's what makes working with these foods so much fun. They brighten a dish, much like salt does. You're working at both ends of the flavor spectrum: salty and sweet. And when you use them together, you don't need as much of either, because they work together to brighten flavors. And so, for instance, Mette uses maple in some of the fish recipes. They really are interesting.

Mette Nielsen: I grew up eating herring and lox, very common foods in Denmark. Maple is not common in Denmark; the sugar maple is native to North America. As a kid, we would see it every once in a while in the market, but it was nothing anybody knew how to use, and certainly not in cooking. That was a fun challenge for me, to take these traditional Danish recipes and then making them new and exciting using maple. It added a level of flavor that we didn't have before. The same in some of the preserving recipes, using maple sugar, which was also a product I hadn't really used before. It's a very expensive product. It's much more expensive than the maple syrup, because it's a concentrated maple syrup. We use very little of it, but it adds so much flavor. So very fun to play with.

SS: You bring up an interesting point, that you have some of those recipes that you grew up with in Denmark, but you also go global with flavors and dishes in this book. You adapt some recipes from different countries that might not typically use maple. Tell us about discovering some of those recipes and what you decided to put in the book.

BD: One of the approaches we take is we look to the flavor of the maple or the honey or whatever food we're working with, to see how that might work with some of our favorite dishes, for instance. Whether they were South American or, in Mette's case, Danish. Then look to see what kind of seasonings that came from that region and how we might replicate those flavors using what was local. Our focus has always been on local. We're seeing that happen in cuisines all over the world, where people are looking at what grows best in their area, and then using them in combination with other flavors from around the world.

To give you an example, we use maple with the duck contif and pepper. Somehow, it works with the fat in the recipe to make it even more luscious than it already is. In some cases, maple replaces agave, for instance, which has a distinct flavor but it's not unlike maple. In some of the Mexican dishes we've used a little bit of maple to replace that same flavor. It was more about paying attention to the entire dish, then seeing how maple might fit in.

SS: Something a lot of people might not realize is there are different grades of maple syrup that all have their own unique profiles. Almost like tasting different wine, you can pick out different notes; it can be sweet or it can be bitter. Can you run through those grades for us and how we can get the most out of each of them?

BD: Thanks for mentioning that. It is very much like wine, and that's what we're seeing happen with food systems all over the planet. Again, people are looking at what flavors are distinct to that region and certainly because we have so much maple syrup here, that's really true for us.

The best way to tell about the flavor about maple syrup is to look for the color. They're all Grade A now; golden is the mildest, followed by amber, followed by dark, and that's followed by very dark. The darker the syrup, the more distinctly maple it would taste. And I love that super dark maple syrup because it's a little more viscous than the lighter maple syrup and it's very rich tasting. Again, you don't need a lot of it, but you get a lot of punch by using that, if you want that distinct maple flavor.

SS: I'm realizing I misspoke. There used to be different grades. There was Grade A and Grade B, B being the much darker, more complex of the two syrups. Now they're all sort of called grade A, but they're described by flavor and color. The grades have fallen by the wayside, is that right?

BD: Yes. That's correct. They did that because by grading them A, B, C, it indicated that maybe they'd be a lesser quality, when in fact they're not. I actually prefer the darker syrups because they have more flavor.

SS: There seems to be so many maple products popping up all over the place, whether it's maple syrup or maple sugars. What is it about maple that lends itself to this small batch production in the spirit of making it in the special way?

BD: What's really interesting is there are large maple organizations that do this commercially. The commercial manufacturers pipe the maple in from trees and then they process it in big stainless steel evaporators. But in our case, we've gone up to friend’s cabins in the woods where we've actually tapped the trees the old-fashioned way with a spile and a bucket, and then lugged the buckets into a big vat over a roaring wooden fire and stirred that maple syrup all night long as it reduces down. It takes a long time to make maple syrup, and it's precious because it is coming from trees and there's no predicting how much syrup you're going to get every year. We've had some great years and we've had some really slim years. That is also reflected in the price.

MN: It takes about 40 gallons of sap to make one gallon of syrup, so that is a lot of water. When the sap comes out of the tree, it looks like water. It's completely clear, and there is no sweetness to it. As you start cooking it down, evaporating it, that's when you start getting the flavor. We would start making tea out of the slightly sweet water. But there's also a lot of minerals, because it's being pulled up deep from the ground early in the spring, and that makes it a little bit different. You can't really taste it, but I like to think it's at least better for us. But also by cooking it on an open fire, you get a smoky flavor to it. It's incredibly time-consuming to make, but it is so amazing; syrup should cost like 100 dollars a gallon, because it is so much work. Just use a little of it and buy a good product. I think that's the best advice.

SS: For those of us who want to start using maple products more regularly in our cooking or our baking, what's the most practical thing to be stocking in our pantries? And, give us some general tips for using it.

BD: The first thing is just make sure once you've opened it that you keep it in the refrigerator. It does tend to get a little moldy on top. That's not dangerous. You can always just scrape mold off then boil the syrup, but do store it in the refrigerator. I like having several kinds of maple syrup in my fridge because it's like having different kinds of vinegar or different types of olive oil.

I may use that very dark, lovely syrup just to season something. Use very, very little of it. It is wonderful mixed with balsamic vinegar if you find that that balsamic is not strong enough or rich enough tasting; you can add a little bit of maple syrup to it, it will brighten the flavor of that balsamic. It's a wonderful way to glaze chicken breasts, but I don't use very much of it because the flavor is very strong. Then for a light syrup, that's a wonderful alternative to corn syrup, for instance, if you're making a pie.

MN: And then we discovered the maple vinegar, which has been a really fun product. Native Americans made a product called sour sap at the end of the season, where they took their sap and they fermented it and turned it into a vinegar-like product. It's not easy to find. We found it online, and we're hoping more producers will start making it locally. It's really fun. It kind of tastes like a cider vinegar, and we tell people to substitute with that if you can't find it. It's fun to use in dressings and in other places where you just need a tablespoon of something to obtain the flavor.