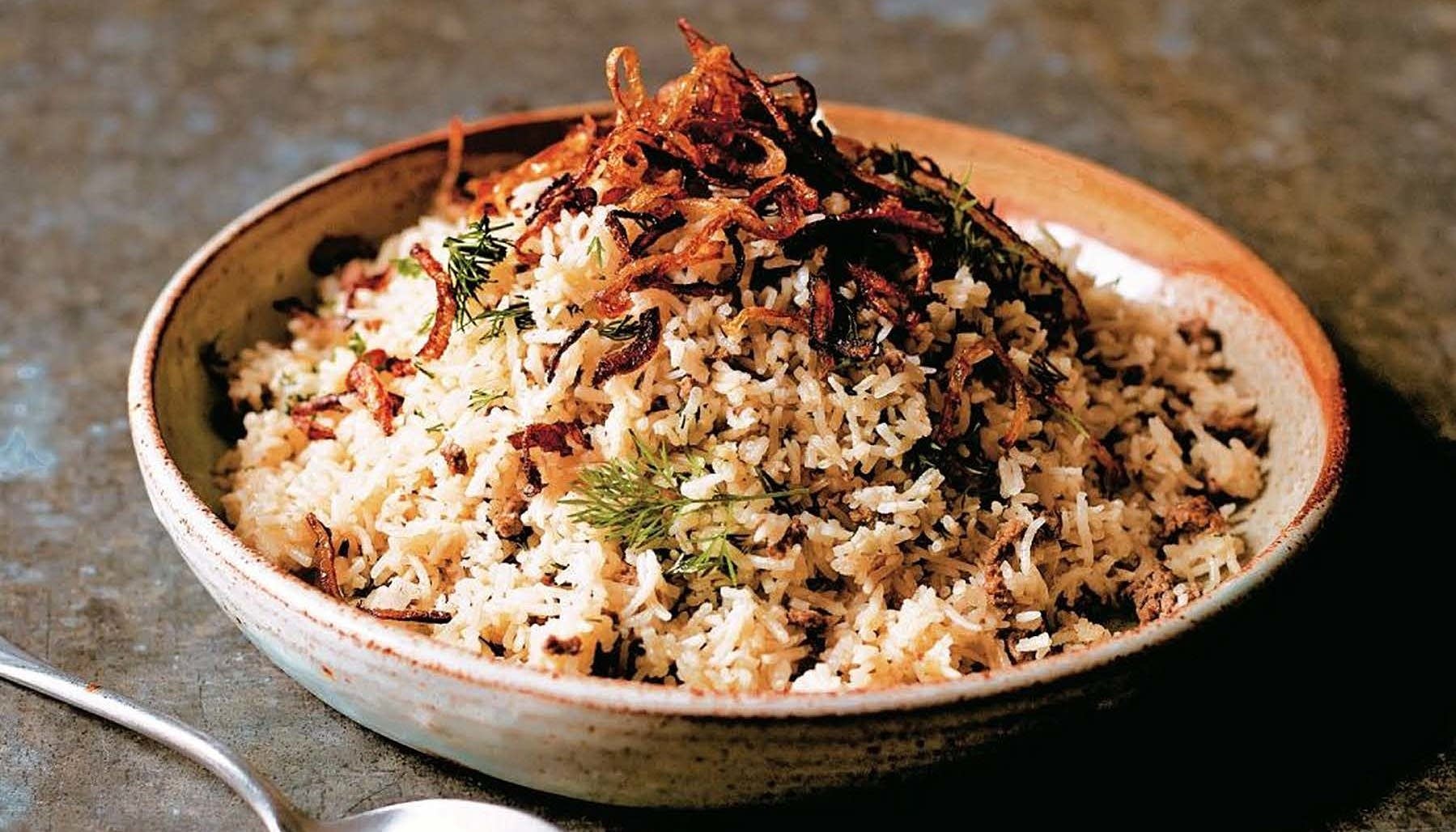 Inspired by the dill pulao made by a friend's Armenian mother, the addition of this fresh herb lends an unusual flavor within Indian cooking. During the 1930s and 40s, there was a thriving Armenian community in Calcutta who enjoyed the patronage of the British, but after Independence it dwindled in size. Today, there are few Armenian families left in Calcutta. This dish can be made using any kind of ground meat-beef, lamb, chicken, and even soy. Ground meat cooks quickly so this is a great dish to prepare when you are short on time. The rice can be made in advance, then reheated in a low oven without any fear of the meat disintegrating.

For the dill pulao

Compared to the lighter, orange-brown curled cinnamon stick, cassia bark is a darker, flatter, more obviously bark-like stick. Frequently, cassia bark is labeled (incorrectly) as cinnamon. For me, the delicate edge of cinnamon makes it perfect for sweet dishes, while cassia bark has a more robust flavor that takes heat far better than cinnamon. I have suggested cassia bark for all the meat and rice recipes in this book, but if you only have cinnamon, then of course you can use that instead.

Wash the rice in several changes of cold running water until the water runs clear, then place in a bowl and soak for 30 minutes in fresh water.

To make the keema, in a non-stick pan, heat 2 tbsp oil over medium­high heat. Add the cardamom pods, cassia bark, and bay leaves to the pan. Immediately add the onions and cook for I minute, stirring. Add the garlic and ginger pastes and cook for a further I minute.

Add the ground meat to the pan, breaking up any clumps with the back of a spoon. Add salt to taste. If using cayenne, add this now. Cook uncovered until all the liquid has evaporated from the meat. Try to avoid adding any water, but if the meat sticks to the base of the pan, you can add a splash of water. Once cooked, remove from the heat and set aside.

Next, make the pulao: In a heavy-based pan chat has a lid, heat the oil over medium-high heat. Add the onion rings and fry until caramelized. Using a slotted spoon, remove the onions and transfer to a place to drain. Spread the onions across the plate so they crisp as they cool. Add the cardamom pods, cloves, cassia bark, and bay leaf to the pan. After a few seconds, remove from the pan with a slotted spoon and set aside.

Boil a kettle of water. Add the rice to the pan and stir for 1 minute to coat in the spice-infused oil. Cover with 2 ½ cups (600ml) boiling water from the kettle. Add ½ tsp salt and the cooked meat to the pan. Cook uncovered over medium-high heat until the water has been absorbed by the rice (about 4 minutes). Cover with the lid, lower the heat, and simmer for a further 15-20 minutes. Once cooked, remove the pan from the heat and, using a fork, gently mix the rice and add the dill. Cover and leave for a few minutes before serving with the onions.

Adapted from Asma's Indian Kitchen: Home-Cooked Food Brought to You by Darjeeling Express (2019) by Asma Khan. Published by Interlink Books.