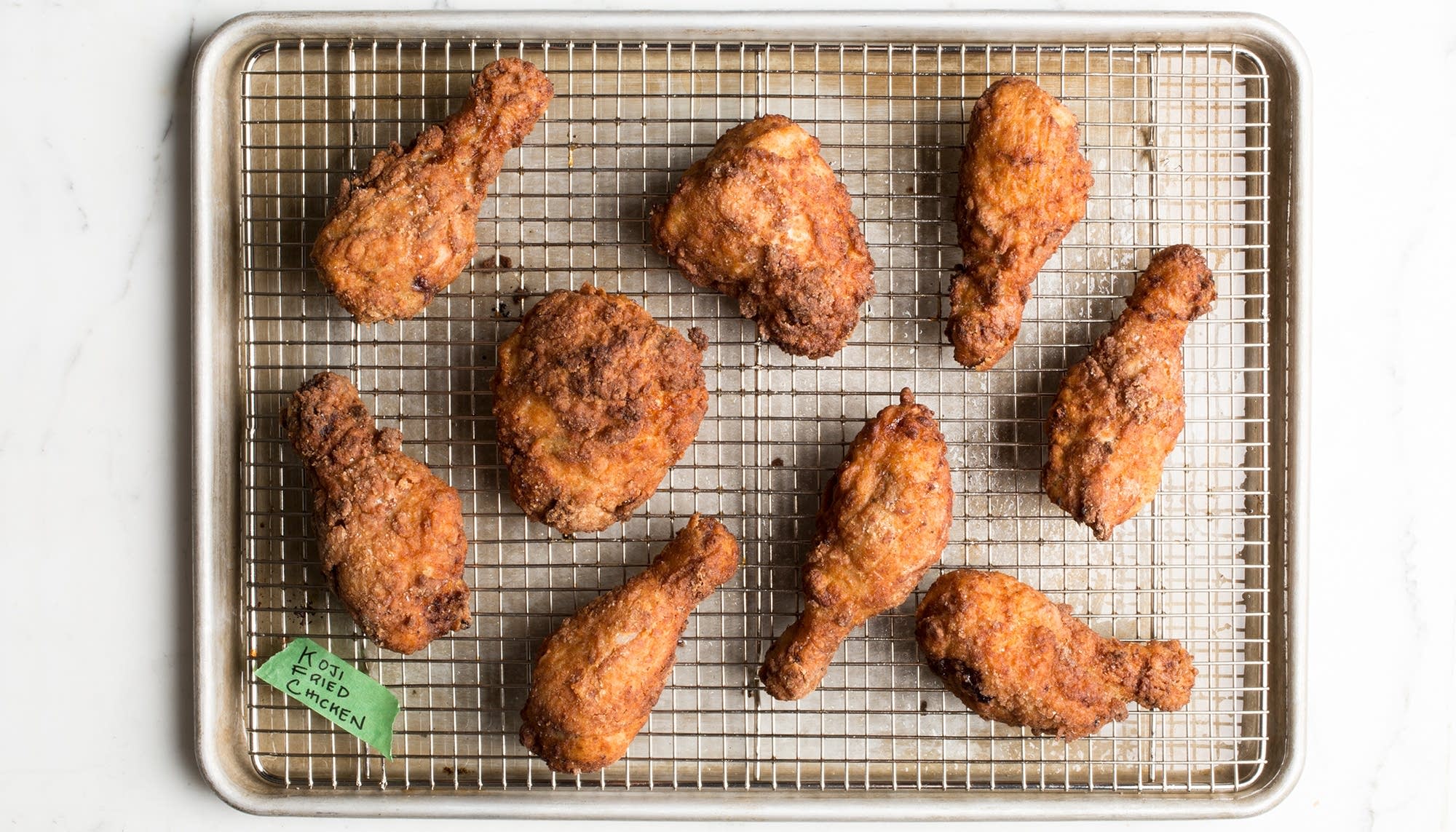 We think fried chicken is something that few people dislike (and if you hate it, we don’t want to know you anyway). Even when it’s bad, it’s still pretty good. Out in Cleveland, koji master Jeremy Umansky is working on a game-changing koji-cultured fried chicken that uses the mold as a crust. We're not nearly as crazy (or as cool), but we still wanted to take advantage of the amazing tenderizing and flavor-boosting properties of shio koji, a mixture of rice koji, water, and salt. So we marinated a bunch of chicken in the stuff and even incorporated some dried granular rice koji into the coating itself to produce juicy, meaty, deep golden-brown, crunchtastic chicken.

This recipe gets better with age. The longer you marinate the chicken (up to 3 days), the better and meatier it gets. And the longer you let the dredge sit on the chicken (up to 24 hours), the better and crispier the crust becomes. We use a fry and then bake method for this chicken to prevent the sugar-rich rice koji in the coating from burning. There are a few options for buying rice koji. Some well stocked high-end supermarkets carry it, but for the majority of us, online is the best option. See below for our shio koji recipe.

1. Combine chicken and shio koji in 1-gallon zipper-lock bag. Press out excess air, seal, and massage bag to evenly distribute shio koji. Refrigerate chicken for at least 8 hours or up to 3 days.

2. Combine koji, flour, cornstarch, 2 teaspoons salt, 1 teaspoon pepper, and baking powder in blender and blend on high speed until finely ground, about 2 minutes. Transfer koji mixture to large shallow dish. Whisk buttermilk, remaining 1 teaspoon salt, and remaining 1 teaspoon pepper in large bowl. Working with 3 pieces at a time, dunk chicken in buttermilk mixture, then dredge in flour mixture, pressing mixture onto chicken to form thick, even coating. Place chicken, skin side up, on wire rack set in rimmed baking sheet. Refrigerate, uncovered, for at least 1½ hours or up to 24 hours.

Shio koji is a traditional use of koji, the ancient mold that gives us soy sauce, miso, fermented bean paste, and sake. It is made by combining rice koji (cooked rice that has been inoculated with koji spores and then dried), salt, and water and letting the mixture ferment for about a week, during which time it develops a sweet, fruity, slightly funky aroma. Shio koji is primarily used as a marinade. Because it is rich in protease enzymes (which break down proteins) and amylase enzymes (which break down starches), it can transform many foods. In our Koji Fried Chicken, it turns the chicken incredibly savory and tender. In our tests on fish, we found that shio koji firmed and gently cured the filets. Makes about 1 quart.

We prefer using a plastic food storage container for this recipe, but any medium (1-quart or more) food-safe container will work. There are a few options for buying rice koji. Some well stocked high-end supermarkets carry it, but for the majority of us, online is the best option. You can purchase our favorite brand here. [Ed. Note: this koji suggestion is from America's Test Kitchen.].

1. In medium saucepan, heat water to 140 degrees F/60 degrees C. Combine hot water, koji, and salt in lidded container and whisk until salt is dissolved, about 30 seconds. Cover with lid and let ferment at room temperature until mixture is thickened and smells sweet, fruity, and slightly funky, at least 7 days or up to 14 days, stirring once per day. After initial fermentation, store in refrigerator for up to 6 months.