Excerpt from The Modern Kitchen by Tim Hayward 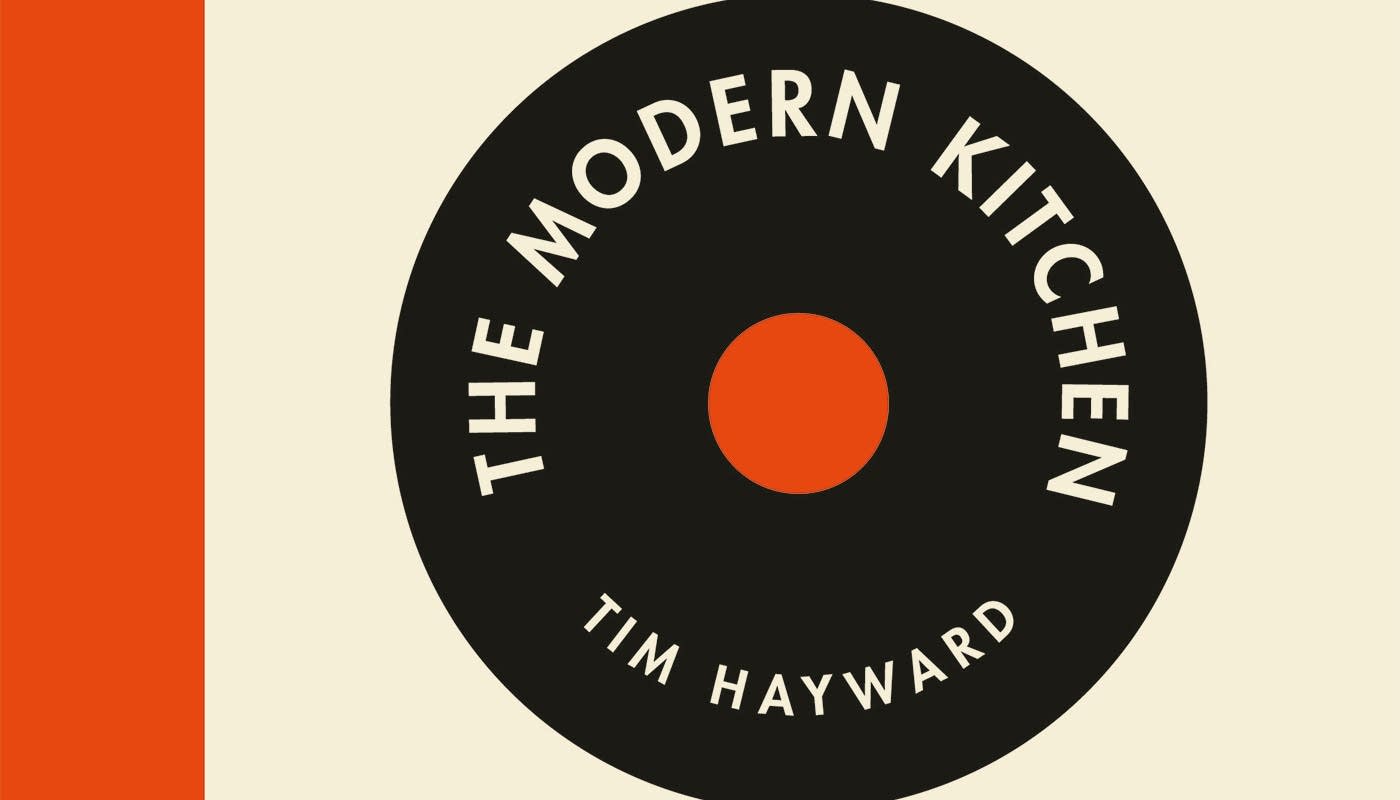 THE GARLIC PRESS may be one of the simplest items in the kitchen drawer but it’s also the most socially divisive. The basic model is a two-piece alloy casting that enables the user to exert a little extra leverage on an individual garlic clove. A key benefit is that one doesn’t need to peel the clove before crushing. With a garlic press one can minimise handling of the clove and prevent the smell lingering on the fingers.

The garlic press was an obvious early choice for stocking in Habitat. It was cheap, functional, a classic French design and unfamiliar to an older generation. For many, the garlic press was almost representative of the store itself – a tiny metal synecdoche – and it certainly fitted well with the aspirations of young customers, experimenting with exotic flavours.

A garlic press costs pennies and should be a convenience and labour-saving boon in any kitchen, but it definitely didn’t appeal to everyone. Elizabeth David, at her most magisterial, wrote in Tatler:

‘I regard garlic presses as both ridiculous and pathetic, their effect being

precisely the reverse of what people who buy them believe will be the case.

Squeezing the juice out of garlic doesn’t reduce its potency, it concentrates

it, and intensifies the smell. I have often wondered how it is that people who

forthwith throw the thing into the dustbin.’

The tension of clashing prejudices is palpable in her rage. It’s distasteful to smell like a Marseille docker, yet there’s a kind of naff, lower middle-class daintiness in avoiding it. Time-pressed professional chefs would simply crush garlic with the side of a blade. This cheap gadget, which subtly promised a degree of garlic avoidance, was a lovely, wide-open target … and an instant shibboleth.

One is not usually required, as a cook, to hold strongly partisan opinions on gadgets. The egg slicer leaves most of us unmoved, the cherry stoner is much of a muchness – but, as in the most bitterly fought politics, once an authoritative opinion is expressed, a line is drawn in the sand. It is impossible not to choose sides. Not only can whipping out a garlic press cause a sharp intake of breath in even the most non-judgemental of cooking companions, but thousands of words of blogs and columns have been written on both sides of the debate. Some cooks swear they can detect a metallic taste in garlic that’s been through the crusher. Sources from gangster movies to food scientists are quoted in support of shaving, grating or mincing with salt, and the briefest of online searches will turn up dozens of side-by-side comparisons.

For a product designer, it would be hard to see the garlic press as anything but a brilliant piece of kit, but for the rest of us embroiled in the ‘garlic press schism’, it must remain, forever, a signifier. You and I may have a garlic press in our kitchens. I wish you well with it but, if you value your reputation, never show it to anyone else.

THE GARLIC POT doesn’t really exist in any culture that’s at ease with the use of garlic. In France, Spain or Italy, it might be hung in ‘grappes’, in India or China it might be kept in a pot or box, but in the UK our relationship with the stinking bulb is more complex.

Garlic is easy to grow, simple to store and usually fairly cheap to obtain. Throughout culinary history, this has meant that the poor have been able to use it as a flavouring. If your main source of nourishment is cheap starch – pasta, potatoes, rice, grits or bread – then a little garlic can spread its flavour a long way.* Smelling of garlic, therefore, was often seen as an indicator of poverty.

Most countries maintained a healthy interchange between the foodways of the gentry and the peasantry, but in England refinement in taste prescribed rigid separation. Early English recipe books, most notably Mrs Beeton’s, were profoundly scathing about garlic and over time the country developed an almost pathological national distaste for it.

It was only with the liberalisation of international travel after the Second World War that the English discovered what they had been missing. The less well-off returned from package holidays still complaining about ‘oily’ food ‘stinking’ of garlic, but the cosmopolitan middle class embraced it keenly.†

Garlic was still bought by-the-bulb at British greengrocers and at a fairly luxury price point. There are many excellent post-rationalisations for the garlic pot – that its ventilation holes allow the bulb to stay dry, that the earthenware takes on the flavor or even that, through some complex light trick, the cloves are prevented from sprouting, but all these myths miss the real point. A garlic pot exists solely so that having been unable to afford a showy string of the stuff, you can proudly display your bulb in a clearly labelled pot. Like a holy relic in a monstrance it’s a public pronouncement of belief: ‘This is a modern, middle-class kitchen. We proudly use garlic.’

* According to Henry Mayhew, social reformer and author of London Labour and the London Poor (1851), the English poor often made do with cheap bread and raw onion for similar reasons.

† Garlic pots were popular souvenirs for many who’d had their culinary horizons expanded on holiday.

IT’S WORTH DISTINGU ISHING between what one might call absolute and comparative time. A clock was always necessary in the kitchen of a great house, where cook needed to have supper in the dining room at a particular hour. Most cooks, however, work with comparative time. It doesn’t matter how long the madeleines take to cook, it only matters that you can repeat them accurately every time.*

Early recipes specify a hot or a low heat and anything else is moderate. Timing was invariably specified as ‘until done’. Experience took the place of thermometer and timer. Where accurate time mattered, cooks improvised more personal timing methods for repeated delicate work. Some early cookbooks revived the monastic tradition of timing things like boiled eggs with Hail Marys.†

Today we are used to the idea that cooking is about temperature and time. When we communicate recipes or instructions, we can specify these things and expect a reasonable amount of repeatability. This is because, since the arrival of controllable ovens, we’ve standardised cooking temperatures and – because we expect to be able to cook from a recipe, successfully, at the first attempt – the cook now needs to measure absolute time in order to cook. The clock, or a similar absolute timing device, became ubiquitous in the domestic kitchen at the same time as the recipe book.

The hourglass is one of the oldest devices we have for measuring the passage of time. It’s unaffected by moisture or heat and can be subdivided into portions of an hour. The egg timer is a smaller version, usually designed to run for three minutes. The simple clockwork timer was a definite improvement – particularly when equipped with an audible alarm – and small portable versions were advertised as ‘liberating’ devices, as the cook could leave the kitchen and do chores elsewhere in the house.

It was a simple matter to add a small clock to an electric oven and this was soon adapted into a device that could be set with both the duration of cooking and a start time. This meant that a loaf of bread or a casserole would be ready just in time for dinner, but the important change here was how the timer was presented. It was possible for a cook to be out of the house while cooking started in his or her absence.

Today, kitchen appliance designers are increasingly connecting their devices to household networks and the Internet. Ovens, slow cookers, kettles, toasters, fridges and sous-vide devices can be triggered and controlled remotely, by the clock on the cook’s mobile phone. Even when cooking traditionally, many of us have grown used to tapping the face of the mobile with floury fingers and yelling ‘set timer to 35 minutes’. In the same way as the wristwatch has become redundant in the age of the mobile phone, perhaps the kitchen clock will return to being a quirky wall decoration.

† Sounds daft until you consider that a monk, who may have been repeating the same prayer hundreds of times a day, would naturally have lapsed into a standard, or at least habitual, time. A good Hail Mary would be repeatable to fractions of a second. Certainly accurate enough for soft-boiled eggs.