Andrea Nguyen and the flavors of everyday Vietnamese food 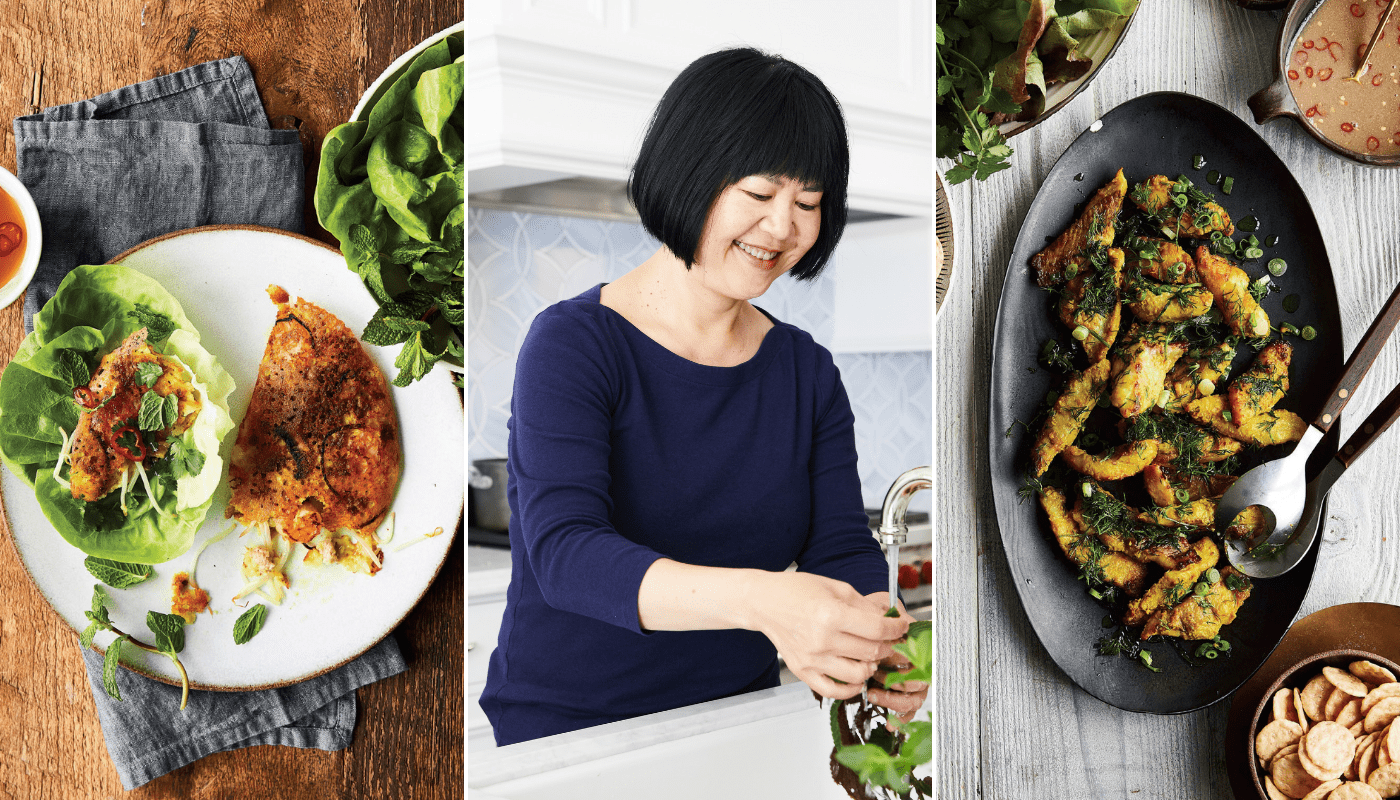 Andrea Nguyen is a best-selling cookbook author and expert on Vietnamese cooking. Nguyen says, in the past, cooking Vietnamese food in America meant multiple shopping trips to specialized Asian markets or substituting ingredients that just couldn't be found here. Thankfully, times have changed and more authentic Vietnamese ingredients are more readily available in the U.S. Nguyen's newest book, Vietnamese Food Any Day includes recipes that can be made from these more ubiquitous ingredients. She talked with Managing Producer Sally Swift about three specific ingredients and also shared her recipes for Sizzling Rice Crepes and Turmeric Fish, Seared Dill, and Green Onion Noodle Bowls.

Sally Swift: I love your new book. I was struck by how many current, trendy ingredients are part of your Vietnamese cooking in this book. For instance, turmeric is everywhere. I have to say that I think the most beautiful recipe in the book is the sizzling rice crepe recipe. There are no eggs in it; it's not an actual crepe. Tell us about that recipe.

Andrea Nguyen: Right. And so people have often times mistaken it as an omelet when they take a look at it. And it’s not really a pancake; it's more like a filled crepe but with no eggs. And what makes it yellow is turmeric. It’s a Southern Vietnamese thing. It's a rice crepe that you can fill with basically whatever you want but classically there's pork and shrimp and mushroom and bean sprouts.

The crepe batter is rice that's been soaked and ground and then blended into a slurry with coconut milk and turmeric, which gives it this sunny color – it’s also a wonderful phytochemical and it’s antibacterial, but it's pretty. You could compare the dish to a dosa.

SS: You've come up with a way to just do it with rice flour.

AN: Exactly. And it took me years to figure it out. Thank you.

SS: Well, thank you because it is just a really wonderful technique.

AN: A long time ago I was soaking rice and doing all this really old-school stuff. But I wanted to know how I could get more people to make this amazing dish that is crunchy and filled with goodies and you wrap it up as lettuce and herb wraps. What I found out was that the trick is if I were to use super hot water and store-bought rice flour – bought from the American supermarket, say like Bob's Red Mill – when you pour hot water into it and it softens the grains. The difference between American rice flour that's sold at the supermarket and health food stores versus what’s sold at Asian markets is that the stuff at the Asian market has been soaked –rice grains that have been soaked – softened and then ground up. So, it's a really fine powder practically. Whereas the stuff that we get at mainstream supermarkets in the United States has just been milled or ground from rice grains, so it's a little coarser. How do then soften that quickly? As soon as I realized that, the door was open to unleash rice crepes onto the world.

SS: Talk to me about turmeric and the use in Vietnamese cooking because it shows up in other places, too.

AN: It sure does. There are a handful of recipes in the book that use turmeric. This is going to sound so much like an American thing, but I've lived in the United States for most of my life; my family came here when I was six years old, when we fled Vietnam in 1975. My mom started using turmeric in various dishes, for example a Hanoi-style turmeric dish that had a lot of herbs and stuff in it – dill and green onion. She would buy ground turmeric at the Asian market. A few years ago I was down in the South, in Atlanta, and I saw piles of turmeric rhizomes. I came back to my mom and said, “I'm so excited!” Recently, I saw it at my local Whole Foods in Santa Cruz where I live and I was like, “Mom, there's turmeric!” And she even had a container of turmeric that she got from Sprouts or something. And she looked at me, she said, “Well, before we came to America there was nothing but fresh turmeric in Vietnam! I used to rub it, and this is how you use it.”

SS: That is funny

AN: The flavor is brighter and it's fun to use. It's messy.

AN: When I first started buying it at my local health food store, the young man who was working in the produce section asked, “What do you do with that?” And I said, “I'm cooking with it. What do you do with it?” And he goes, “I just throw it in the blender with my smoothie.” And I was like, “No. This is a wonderful ingredient and you can let it express itself in so many wonderful ways. When it's used fresh and grated for things like the Turmeric Fish and Seared Dill dish that's in the book, it lends this little note of clarity and vibrancy that you really don't get from ground turmeric. It makes me instantaneously happy and I feel sunnier. [laughs]

SS: That's just beautiful. Everything it touches, that stain is just so beautiful. I want to talk about that dish; it is fish that is layered with dill. I'm sorry, I go to Scandinavia when I think about dill. So tell me about the tradition of dill in Vietnamese food.

AN: Like a lot of herbs that are used in Vietnamese cooking, dill is not just a pretty garnish. It is used practically like a vegetable – like a leafy green vegetable. You use a lot of herbs and Vietnamese cooking, and dill is one of them that's very popular in Northern Vietnam. The dish that we're talking about, the turmeric fish, is from Hanoi; that’s in the northern part of Vietnam, the capital of Vietnam. I broil it. And after it's been broiled, you put a ton of dill and green onion on it, then you pour really hot, nearly smoking oil on it and its sears everything. That perfume from the dill is just amazing and it's like the finishing layer of flavor on that dish. You cannot get away with using dry dill, and you have to use a lot of it because it complements the turmeric so well.

SS: It is such a beautiful dish and really simple. You have simplified it beautifully in your book. I love the idea of you thinking of herbs as being a vegetable.

AN: Yeah. And it adds that extra layer of flavor pop.

SS: The last thing I want to talk to you about is coconut water; you have coconut water all over this book. And we're not talking coconut milk; we're talking about the sports drink, as we know it here in the states. Tell me what the heritage is of that.

AN: There are a lot of coconuts and Southeast Asia. [laughs] They are harvested at different times of their life, different levels of maturity. When they're young coconuts, meaning that they still have parts on the outside that is great and there's a very thick layer of husk on the outside, that's great for drinking. If you think about it, it makes great sense in a situation where you may not have access to potable water. And the liquid inside this young coconut is slightly sweet; it's pure, it's clean, and it has a tropical lilt. That little bit of sugar is fabulous, especially used in Southern Vietnamese dishes. For example, you can cook shrimp with a caramel sauce and coconut water; the coconut water gives it this extra edge of sweetness that's very natural and tropical.

SS: The book is delightful. Thank you so much for coming in.

AN: You're very welcome. Thank you so much for inviting me. 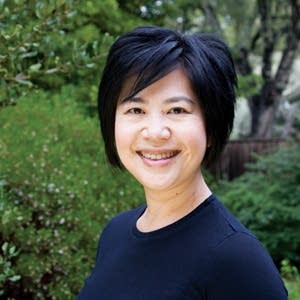 Andrea Nguyen is an author, freelance writer and cooking teacher. She is the author of several cookbooks, including Into the Vietnamese Kitchen (a finalist for a James Beard award for Best Asian Cookbook and winner of two IACP award nominations), Asian Dumplings and Asian Tofu. Her writing has appeared in publications such as the Los Angeles Times, the Wall Street Journal, Bon Appetit and Saveur, where she serves a contributing editor.
Roasted Veggie Bowl with Green Goddess Dressing
Tinned Scallops and Kelp Pesto
Sheet Pan Chow Mein
Peanut Stew with Spinach and Miso