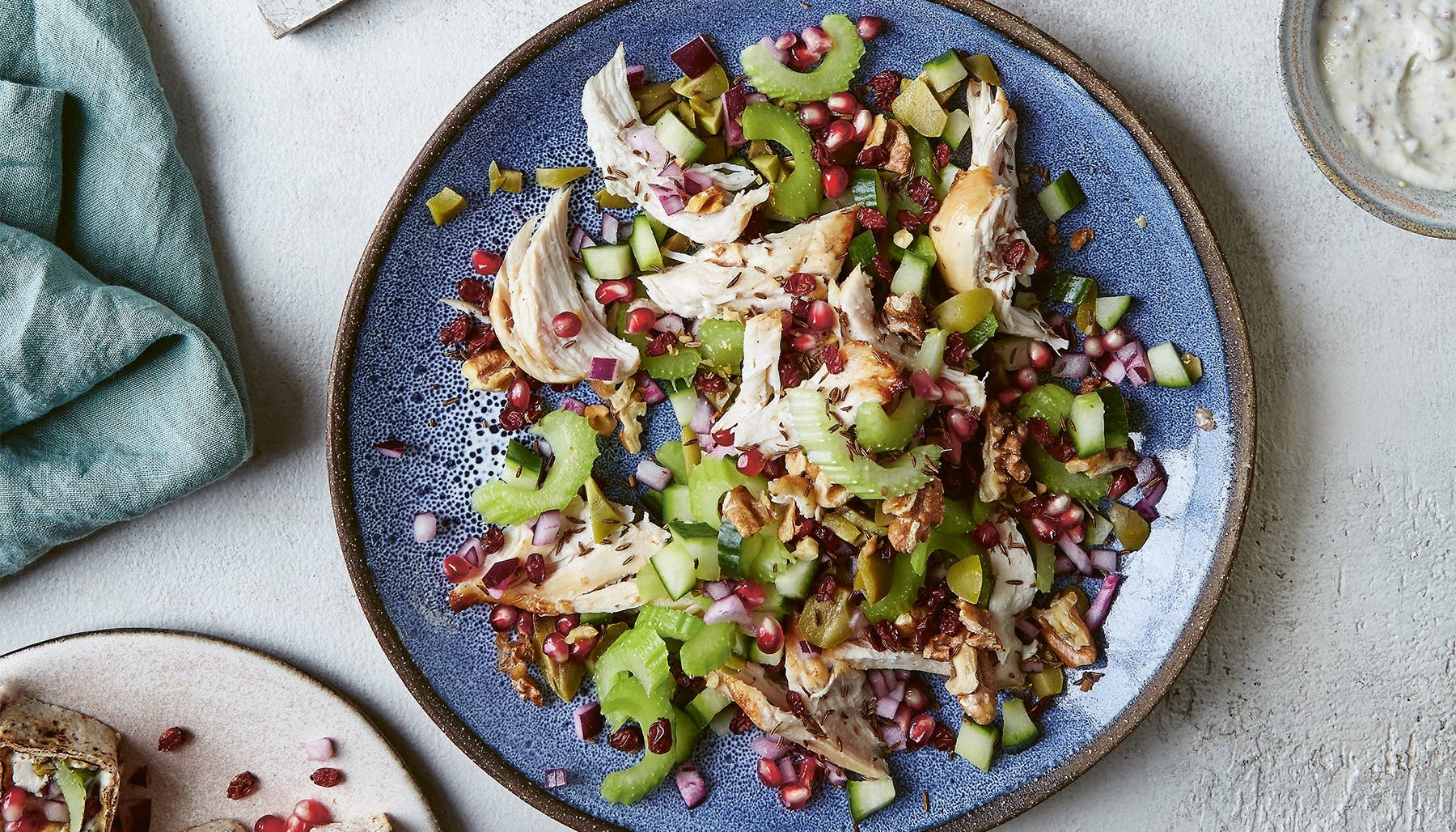 Chicken salad may seem retro, but this one is positively medieval. It’s a timely resurrection of a much-loved dish, described as the perfect summertime fare by Ibrahim ibn al-Mahdi (poet, musician and cook) who devised this barida dish in the ninth century. The idea behind bawarid – cold dishes – is a mixture of meat or vegetables, brought together by a sauce. Timeless. Much like the sandwich… Many believe the sandwich to have been invented in 18th-century England by Lord Sandwich, however, medieval records turn back the clock. At ancient Persian banquets, you’d be served a sort of canapé called bazmaward or awsat, which was essentially thin flatbread (but not always) filled with roast meat, such as the following baridas, rolled up and sliced into pin-wheels. Today, we call these aarayes in parts of the Middle East. Bazmaward make for wonderful snacks or finger food to decorate the table with.

In a mixing bowl, combine all the ingredients for the filling. Serve as a salad or use the filling as a bazmaward (should make 16 pinwheels).

To make the bazmaward, preheat the grill (broiler) to medium-high. Grease a baking tray with a generous amount of oil.

Use a knife to slice through the centres of the flatbreads and spread the filling mixture between the four rounds. Roll up firmly, tucking in the sides, like a burrito. Using a serrated knife, slice into 2.5 cm (1 in) slices. Place on the tray and grill for 5 minutes, or until crisp. Turn them over and repeat on other side. Serve warm.

Labneh, or Greek yoghurt, is not interchangeable with regular yoghurt and comes in two consistencies: the thick, yet spreadable kind known simply as labneh or the drier, firmer kind (traditionally made from goat’s milk and rolled into balls), known as labneh malboudeh. For the soft spread, the yoghurt usually only needs about 24–48 hours to strain into labneh. Marketing terms for yoghurt on the shelves today include labels such as ‘Greek’ yoghurt or ‘Greek-style’ yoghurt, both labels that imply the yoghurt has been strained, which if you skim-the-surface should reflect a soft, spreadable labneh! However, things are not that straightforward. Greek-style yoghurt will have been thickened by some means other than straining, such as thickening agents and emulsifiers, and this can greatly affect the consistency (it’s inconsistent) and in turn the end results when cooked with. The most authentic and readily available store-bought option, comparable to a soft, spreadable labneh is the FAGE® brand, which is what I recommend using. If you are using this brand or any other strained-yoghurt of the same consistency, then straining it for spreadable labneh is not necessary as it is already thick enough! However, if you are after a firmer, drier labneh crumb, to make labneh balls, for example, then starting off with the FAGE® brand or one of similar texture, straining for 2 days rather than 3 days should suffice. You may use runny Greek yoghurts and strain them to soft labneh, though I don’t think it will save a substantial amount of time in comparison to using simple yoghurt.

To make labneh, you can use sheep, goat, camel, buffalo or yak’s yoghurt; each lends a slightly different flavour profile (goat’s yoghurt yields the most texture in my opinion). Either way, always start with full-fat yoghurt. If you’re up for it, try suspending the bag from your kitchen tap. This is the way we do it in the Middle East, and the best way to develop the flavour. Make sure the tap (and surroundings) is clean and be sure to set aside the labneh bag if you need to use the faucet. The whey from straining the labneh is useful added to stews, ice cream and to make bread. Labneh, both the firm and soft kind, is wonderful served as an appetiser with fresh vegetables such as sliced cucumbers and tomatoes, and/or olives.

Combine the yoghurt and salt in a mixing bowl. Line a colander with muslin (cheesecloth) and set over a bowl. Add the yoghurt mixture, gather the muslin and twist tightly. Tie with kitchen string. Transfer the bowl with the colander and muslin bag to the fridge to sit overnight or for up to 24–48 hours for soft labneh.

After straining, you will notice that the whey has separated from the yoghurt into the bowl. The strained yoghurt will be thicker – similar to cream cheese in consistency. If you’d like it thicker and firmer still leave it to strain for 1–2 more days.

To serve, transfer the soft labneh to a serving dish and use a spoon to create a well in the middle. Drizzle with olive oil.