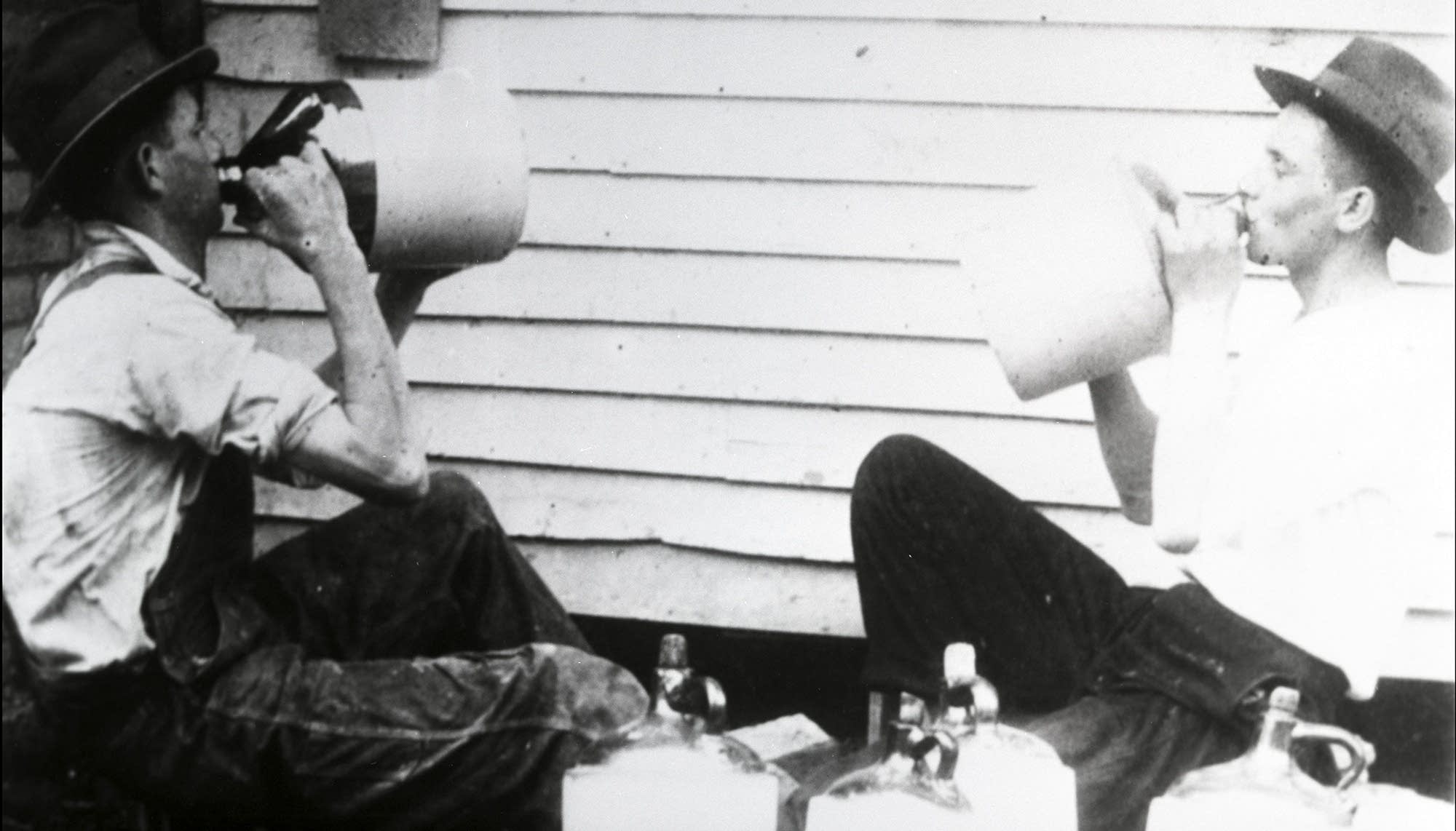 Moonshine is a spirit that goes by a long list of nicknames: white lightning, corn liquor, stump water, skullcracker, wildcat, ruckus juice, and that is a short list. Moonshine, which is most often distilled from corn, has a deep connection to the history of the United States and is seeing a recent boom in popularity. John Schlimm is the author of Moonshine: A Celebration of America’s Original Rebel Spirit. His book is part history lesson and part recipe book for moonshine cocktails and infusions. Digital Producer Chip Walton talked with Schlimm about his boozy research and wrangled some recipes for The Moonrunner’s Manhattan, Smokey Mountain S’more, and Stockcar just in time for the holidays.

Chip Walton: Crazy nicknames aside, what exactly is moonshine?

John Schlimm: It’s quite simple. It boils down to – literally – water, corn, yeast and a copper pot still. Those are the core ingredients of moonshine. Of course, these days there are all sort of flavorings and infusions, but it’s really a simple, natural recipe.

CW: And it’s not the same thing as white whiskey, correct?

JS: There are so many variations. You do see some distilleries calling it white whiskey, but moonshine is really its own separate thing, made of corn, not barley. I think of moonshine and whisky as close cousins, but they are not the same thing.

CW: At certain times in history, the term or idea of moonshine has been seen as derogatory, similar to the way that homebrewed beer was presumed to be of an inferior quality or even dangerous.

JS: It was only really derogatory for temperance activists and the authorities. Certainly, anyone who enjoyed drinking didn’t find anything derogatory about it. But, to your point, in the past there were people who – once moonshine became a huge money maker – would skimp and use certain ingredients that would make it rather toxic. In the strictest of terms, that’s what might’ve given it a bad name. Today it’s regulated and legal, so distilleries have to follow rules and laws just like any other brewery or winery.

CW: You tell us that the history of moonshine is a history of immigrants that revolves around distilling.

JS: Absolutely. The original moonshiners were among the first immigrants to the United States before the United States was even the United States – starting in the 1600s. Continuing into the 1800s moonshine was intertwined with this new and growing country, and right into modern day. They were farmer-entrepreneurs, they were artisans, they were adventurers; these men and women embodied what it means to look towards the American dream and go after it. After 250 years, they finally achieved the American dream; after everything they have gone through, today their moonshine is legitimate. In the end, they won. Their legacy is a celebration and embodiment of America’s original rebel spirit.

In that way of looking at it, the story of the moonshiners is quite inspirational. Did they break the law? Yes, they did. But that becomes part of what made them folk heroes and fantastic characters that we can look back upon and say that they are part of the roots  of what shaped this country.

CW: It’s never been easy though, both physically and legally.

JS: They never had it easy. Certainly in the beginning these were farmers and farm families living in the hollers and back hills of Appalachia and elsewhere in the country. Times were tough. A lot of times they are characterized as hillbillies and rednecks; those are labels that I dare say they would wear with great pride. But they were smart and quite wise. They discovered that from their fields of corn they could distill moonshine, they could then transport it much easier than the corn itself, and they could make a whole lot more money.

They were berated by temperance activists almost from the beginning. At times, it was illegal or they didn’t want to pay taxes, so the government came after them and tried to chase them down.

And, talk about the entrepreneurial spirit, moonshine paved the way for NASCAR. Those same bootleggers that were outrunning the authorities on the weekdays would race their cars on the weekend. There was a bit of ego involved. Everyone was trying to prove their car was the fastest, and they would race in old cow pastures. Eventually, they formulated that into a structure that became NASCAR, which is now a multi-billion dollar industry. Again, at almost every inch of the history of this country the moonshiners played some role.

CW: What effect did Prohibition have on their efforts?

JS: True to their rebel spirit they did not back down. Instead, they mastered the concept of supply and demand. Because as soon as the government said people were not allowed to drink alcohol, guess what happened? People wanted to drink alcohol, and more than ever before. The moonshiners were right there to give the people what they wanted and to take their money in exchange. It made a lot of moonshiners very rich.

CW: Prohibition nearly killed off the American brewing industry – at least as far as number of breweries that existed before and after Prohibition. Did it affect moonshiners in the same way?

JS: The laws have always been a bit tricky where the moonshiners are concerned. There were breweries and whiskey-specific distilleries dating back hundreds of years in the U.S. But, you didn’t see actual legit moonshine distilleries because moonshine was still being made in the backwoods and hollers up until the mid-20th century, when it slowly started coming out and became more legitimized. Now it seems every week you hear about a new functional moonshine distillery opening somewhere in the U.S.

While the temperance activists may not have succeeded in the end, they certainly did their damage along the way in creating a stigma wrapped around alcohol in general, but specifically moonshine. Because it came out of the backwoods, it had that stigma attached to it for a long time, unlike the wine, beer, and whiskey that emerged more victoriously post-Prohibition.

CW: What’s the moonshine lifestyle and industry look like today?

JS: This is the new golden age of the moonshiners. In many ways moonshine is the new craft beer. Just about every bar you go into has a few moonshine cocktails of some kind, some liquor stores have whole sections for moonshine – just a few years ago you would not have seen that. Now that it’s been legitimized, it went from the dirt roads right up the city streets and avenues; people are loving it and using it in a lot of diff­erent ways.

CW: What is the flavor and sensation of moonshine? How should we enjoy it?

JS: Pure unflavored moonshine should go in smooth and transform into a very comforting burn – that beautiful burn that we all love in that very first sip of whiskey or vodka. It’s extremely versatile in cocktails, much like a good quality vodka. And you can temper that burn pretty easily with the use of mixers, juices or other spirits.

As far as flavored moonshine, what I tried to capture in this book is that there are a lot of directions it can go. Mostly what you’ll find in stores are the fruit-infused moonshine – strawberry, cherry, peach – which are a bit sweeter. Those are the most popular with the most people because it tempers that burn. I have had a lot of fun in experimenting with moonshine infused with onion or leeks or garlic. It’s not so much that you’re going to drink those straight over rocks. They become great ingredients for cocktails. The range of flavors that works with moonshine includes both sweet and savory. In many ways, it’s like a blank canvas; there’s a lot you can do with it.

Explore the moonshine selection at your favorite spirits shop to make John Schlimm’s recipes for The Moonrunner’s Manhattan, Smokey Mountain S’more, and Stockcar.