Step up your gravy game with America's Test Kitchen 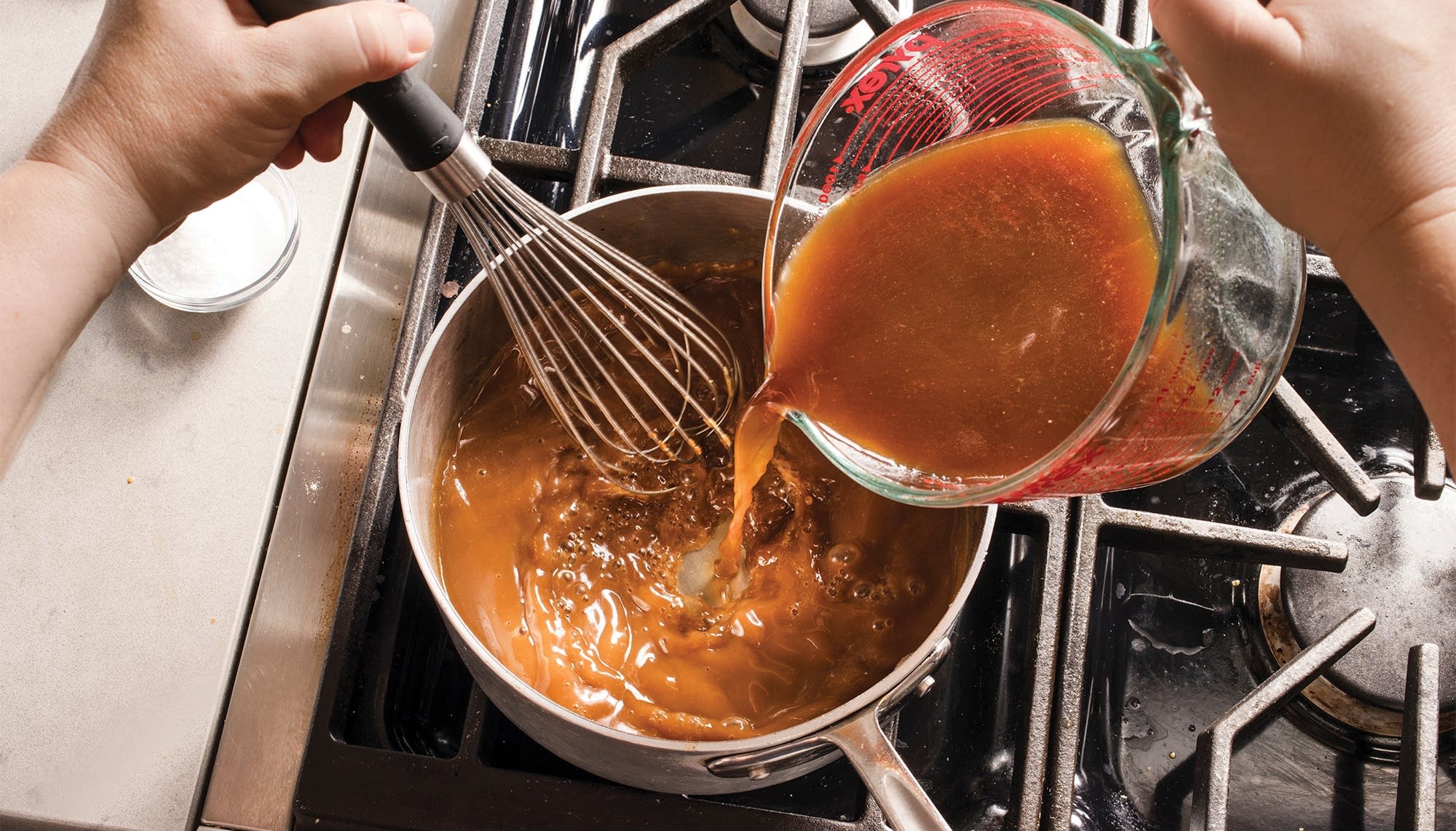 Mathematically speaking, the number one freakout-inducing dish on Thanksgiving is obviously the turkey. But, whatever you think about brining or deep frying or high heat versus low heat, the fact is that the best insurance policy for any kind of turkey mishap is to have a great gravy, and a boatload of it.

Lan Lam is a senior editor for Cook's Illustrated and recipe developer for America's Test Kitchen. She came up with a brilliant gravy that you can make ahead of time. And the smart part of it is that you don’t have to stand there and brown any turkey parts. She talked with Managing Producer Sally Swift about the technique and shared the recipe for America's Test Kitchen's Favorite Turkey Gravy. Listen to their interview and read Lan Lam's Cook's Illustrated article "Game Changing Gravy" below.

When there are pies to bake, potatoes to mash, and a turkey to carve, the gravy can become an afterthought, often thrown together at the last minute amid the chaos of getting all the food to the table. At that point, there’s no time to eke out a flavorful stock for the base, and the roasted bird may or may not have generated the drippings you were counting on to infuse the gravy with rich turkey flavor. The result—whether gloppy, runny, greasy, or just plain dull—is a shame, since many of us drizzle gravy over the entire plate.

After spending weeks reimagining the gravy-making process from start to finish, I came away with an approach that produces a full-bodied gravy that truly tastes like turkey and can be almost entirely prepared days (or even weeks) ahead of time. Best of all, you don’t need drippings to make it taste great (though you should certainly add them if you have them), and the recipe can be easily tweaked to accommodate guests with dietary restrictions. Read on and I’ll review the important points.

Start with a Seriously Flavorful Stock

Gravy is simply a sauce made by seasoning and thickening stock, so it’s essential that the stock be full-flavored. And the most critical component in building flavor is creating a good fond. The first step in most gravy recipes is to build fond by searing turkey parts such as the neck and giblets. But we came up with an approach that’s more effective:

Instead of initially searing the parts, we simmer them in chicken broth until the liquid evaporates. That may sound counterintuitive to browning, but simmering actually extracts the juices and fat much more thoroughly than searing does. The proof is visible on the bottom of the pot: Once the liquid evaporates, the entire bottom of the vessel is coated with a gorgeously browned layer of fond.

Many gravy recipes call for a combination of chicken broth and water, but the latter dilutes flavor and requires reducing to concentrate savoriness. We use only broth.

3. Use a Dutch Oven, Not a Saucepan

In addition to using the neck, heart, and gizzard (we avoid the liver; its strong mineral flavor ruins gravy) to create fond, we trimmed excess skin from the top of the breast and excess fat from the bottom of the cavity and added those to the pot as well.

Once we created our great fond, we proceeded with the usual steps for making stock: We sautéed the aromatics, deglazed the pot with wine, added more broth, covered the pot to limit evaporation, simmered the stock for about 1 hour, and strained out the solids.

Gravy recipes often call for defatting the stock, but that’s a mistake. In tests, we found that the bird’s fat is integral to making gravy that tastes like turkey—not just generically like poultry—because an animal’s fat is a repository for its unique aromatic compounds.

Be Sure to Brown the Roux

The stock is whisked into a roux, a cooked paste of roughly equal parts fat and flour, and the roux transforms the liquid stock into a full-bodied gravy. The key to making a good one is taking the time to cook the mixture until it’s deep golden brown, since that color translates into a gravy with equally rich color and nutty depth. Browning the roux also yields a gravy that stays fluid longer (a boon to dinner guests who go back for second helpings) because the starches in the flour break down into smaller molecules that are slow to link up with one another as the gravy cools.

Add Drippings (If You've Got Them)

If you have them, adding drippings to the finished gravy will make it taste even better. Be sure to defat them first (the stock adds enough fat), and don’t add more than 1/4 cup or the gravy will be too thin

To avoid as much last-minute work as possible, there are two make-ahead opportunities built into the recipe. The turkey stock can be prepared and refrigerated three days in advance or the gravy can be prepared and frozen up to two weeks ahead and gently reheated with the drippings (if using).