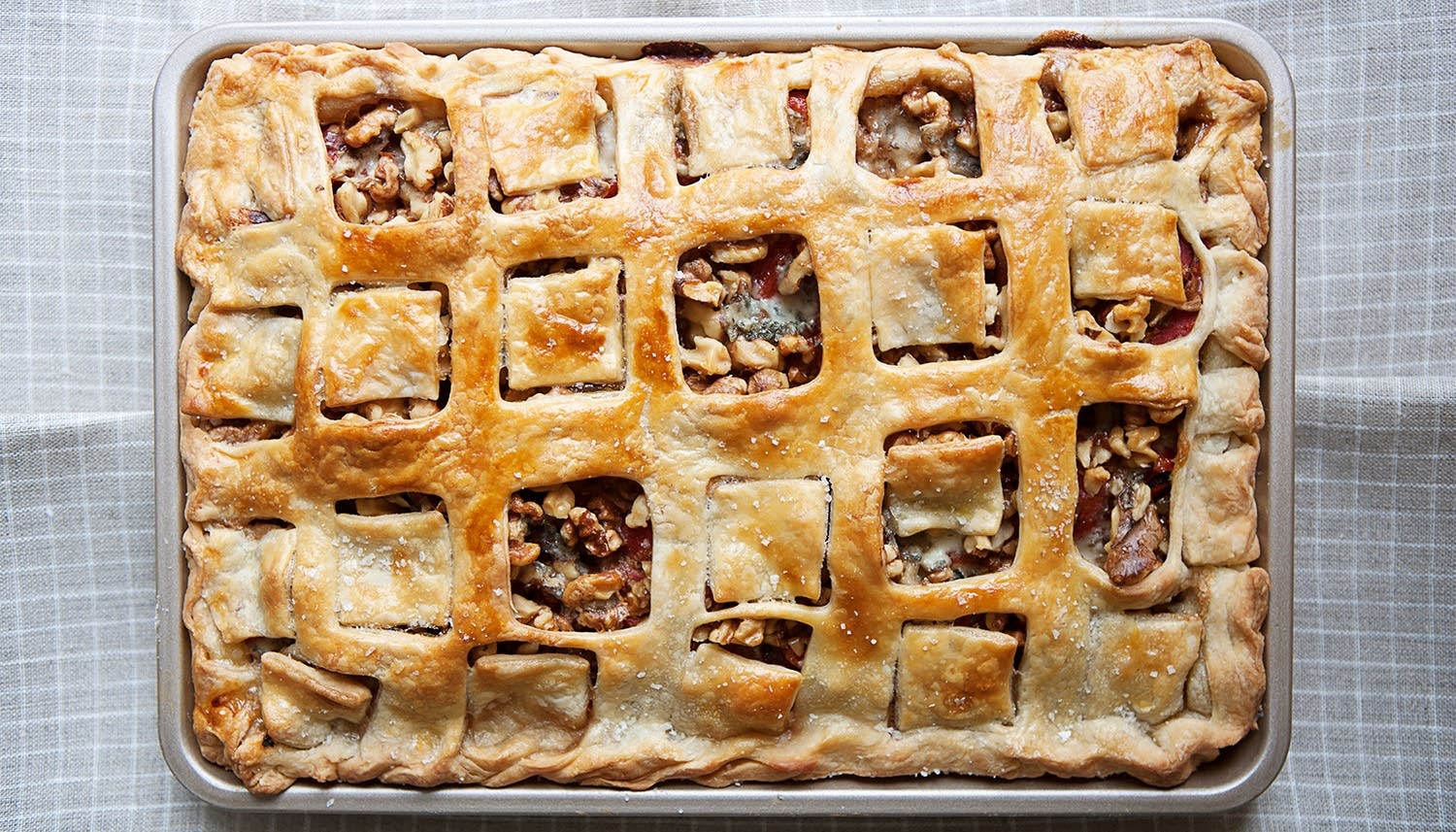 Slab pies turn out to be the perfect solution for cocktail hour. Inspired by a phyllo filling from The Silver Palate Cookbook, I first combined spinach, gorgonzola, and walnuts in my early 20s when I decided to have a cocktail party. I made so much, I spent five days filling and freezing tiny phyllo appetizers. They were devoured and everyone was amazed, but I never did it again. Since then, I’ve shied away from large fussy projects and tend toward simplification. Pie is all that. And this pie is all that and more.

Make Ahead: The pie may be assembled and baked several hours in advance and reheated from room temperature: Cover in foil and heat for 20 minutes at 350°F, then 5 to 10 minutes uncovered, until warmed through.

For the crust: In the food processor, pulse the flour, butter, cream cheese, and salt until the fats are in small pieces coated with flour, about 15 times. Add the water all at once and process until the mixture almost forms a ball. Form the dough into a 6- by 4-inch rectangle using plastic wrap and a bench scraper to firmly press the dough into a cohesive form. Wrap tightly and refrigerate a minimum of 4 hours.

Remove the dough from the refrigerator and allow it to warm slightly. Divide the dough into two pieces, one slightly larger than the other. Roll out the larger piece to 11 by 15 inches and place in the slab pie pan, pressing it into the corners of the pan and allowing the excess to drape over the sides. Refrigerate. Roll out the second piece of dough to 10 by 14 inches, place it on a lightly floured sheet of parchment, and refrigerate.

Heat the oven to 400F; if you have one, place a baking stone, Baking Steel, or inverted baking sheet on the center rack to heat.

For the filling: Place the spinach in a microwave-safe bowl, cover loosely, and microwave for 2 minutes. (If you do not have a microwave, steam the spinach briefly until just wilted.) Squeeze out any moisture.

Warm the olive oil in a medium skillet over medium heat until shimmering. Add the onion and cook until translucent. Add the shallots and continue cooking until both the shallots and onion have wilted; the entire process will take about 10 minutes. Stir in the spinach, salt, and pepper and coat everything in the oil. Taste and add more salt or pepper if you wish, keeping in mind the cheese is salty and there will be salt on the top crust as well. Scrape the spinach mixture into the prepared crust and sprinkle the roasted peppers, cheese, and walnuts on top of the greens.

Cut strips from the rolled-out top crust and drape them diagonally over the filling, or form a lattice, or top the pie with any other open form crust until the surface is mostly, but not completely, covered. To replicate the look in the photo, roll out the top crust and place it on a sheet of parchment. Chill well, then stamp out the squares with a cookie cutter, holding the cutouts aside. Drape the top crust over the filling, then replace the cutouts. Stir the egg yolk and water together and, using a pastry brush, paint the top crust with egg wash. Scatter flaky salt over the surface.

Bake (on top of the steel, stone, or baking sheet if using) for 40 to 45 minutes, until the filling is bubbling and the surface is golden brown. Cool on a rack for at least 10 minutes. Slide the entire pie out of the pan onto a large board. Cut the pie into smallish squares and serve with a cocktail.