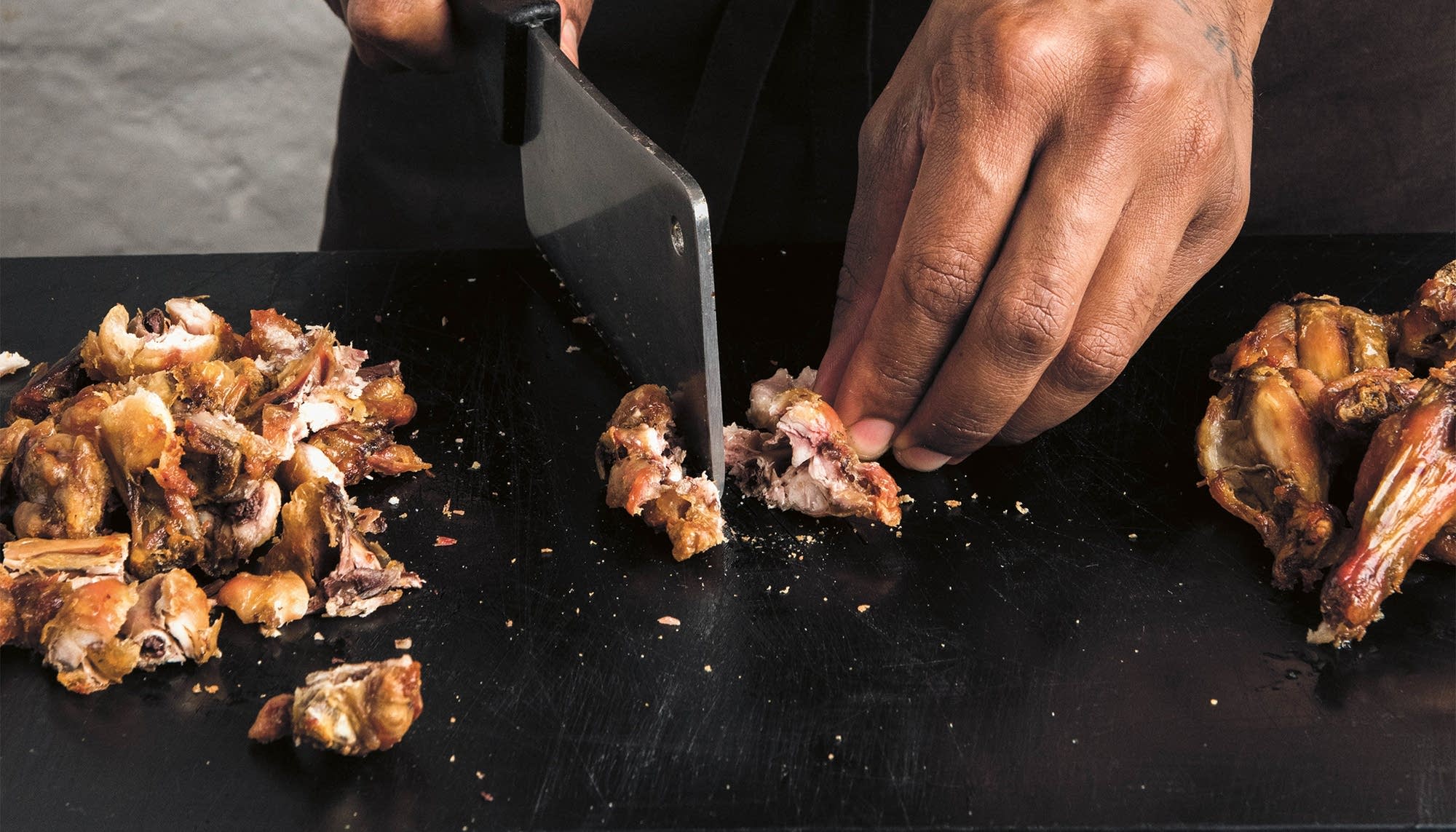 René Redzepi – Fermentation, Inspiration and the Balance of Life

Roasting brings a lot of rich, fully developed flavor to this garum, meaning it needs only about a month of fermentation to coax out more umami. If we were to ferment this chicken garum as long as we do beef or squid garum, it would lose its subtlety and complexity.

NOTE: The in-depth instructions for Beef Garum in The Noma Guide to Fermentation serve as a template for this recipe. It is recommended that you read the book before starting in on this one.

Note: There is a recipe for Pearl Barley Koji in The Noma Guide to Fermentation. However, the authors say you can use commercially available koji for the this garum recipe as well.

Place the bones in a large pot and fill with water just to cover—about 3 liters. Bring the water to a boil, skimming away any impurities that float to the surface as it comes to temperature. Once it reaches a boil, reduce the heat to a simmer and cook the stock for 3 hours.

In the meantime, heat the oven to 180°C/355°F. Line a baking sheet with parchment paper. Place the chicken wings on the lined sheet and roast them for 40 to 50 minutes, tossing several times while cooking to ensure that they get an even, dark browning. Remove the wings from the oven and let them cool down. Weigh out 2 kilograms of the roasted wings and use a cleaver to chop them into small pieces. (If you have any extra wings, well, then have yourself a snack.)

Strain the chicken stock through a fine-mesh sieve and allow it to cool.

Pulse the koji in a food processor to break it up into small pieces. Put the chopped chicken wings, koji, salt, and 1.6 kilograms of the chicken stock in a 3-liter fermentation vessel of your choice and stir to combine thoroughly. Scrape down the inner sides of the container with gloved hands or a rubber spatula and lay a sheet of plastic wrap directly on the surface of the liquid. Cover the container with a lid; screw it on slightly less than completely tight if it’s a screw cap or leave it slightly ajar in one corner if it’s a snap lid. Ferment the garum in a fermentation chamber at 60°C/140°F or in an electric rice cooker on “keep warm” for 4 weeks.

To harvest, pass the garum through a fine-mesh sieve, and then again through a sieve lined with cheesecloth. Allow the liquid to settle and skim off any fat that floats to the surface.
Pour the garum into bottles or another covered container. The garum is very stable and will keep well in the fridge for months. You can also freeze it for longer storage without any negative effects, but note that because of the high salt content, it probably won’t freeze completely solid.

Ramen Broth
When first tasting roasted chicken wing garum, almost every Noma chef mutters the same word: “Ramen.” It’s true, this garum possesses some of the same deep, meaty tones of a great bowl of ramen. A splash poured into a basic kombu and katsuobushi dashi makes for a convincing cheat. And if you’ve made a more proper ramen broth, a touch of garum will help kick the flavor up to eleven.

Roasted Cashews
Coat cashews (or any nut of your choice) with melted butter and spread onto a baking sheet or oven-safe pan. Roast in a 160°C/320°F oven until they become golden brown and fragrant. Remove them from the oven and mix in a couple of tablespoons of chicken wing garum. Don’t add so much garum that the liquid pools on the pan. All the garum should be absorbed by the nuts and evaporated by the heat. You don’t want the cashews to become soggy. Once they cool, they should still be crunchy, with a savory, salty crust.

Excerpted from The Noma Guide to Fermentation by René Redzepi and David Zilber (Artisan Books). Copyright © 2018.