Cooking with pheasant: new recipes and advice from Hank Shaw 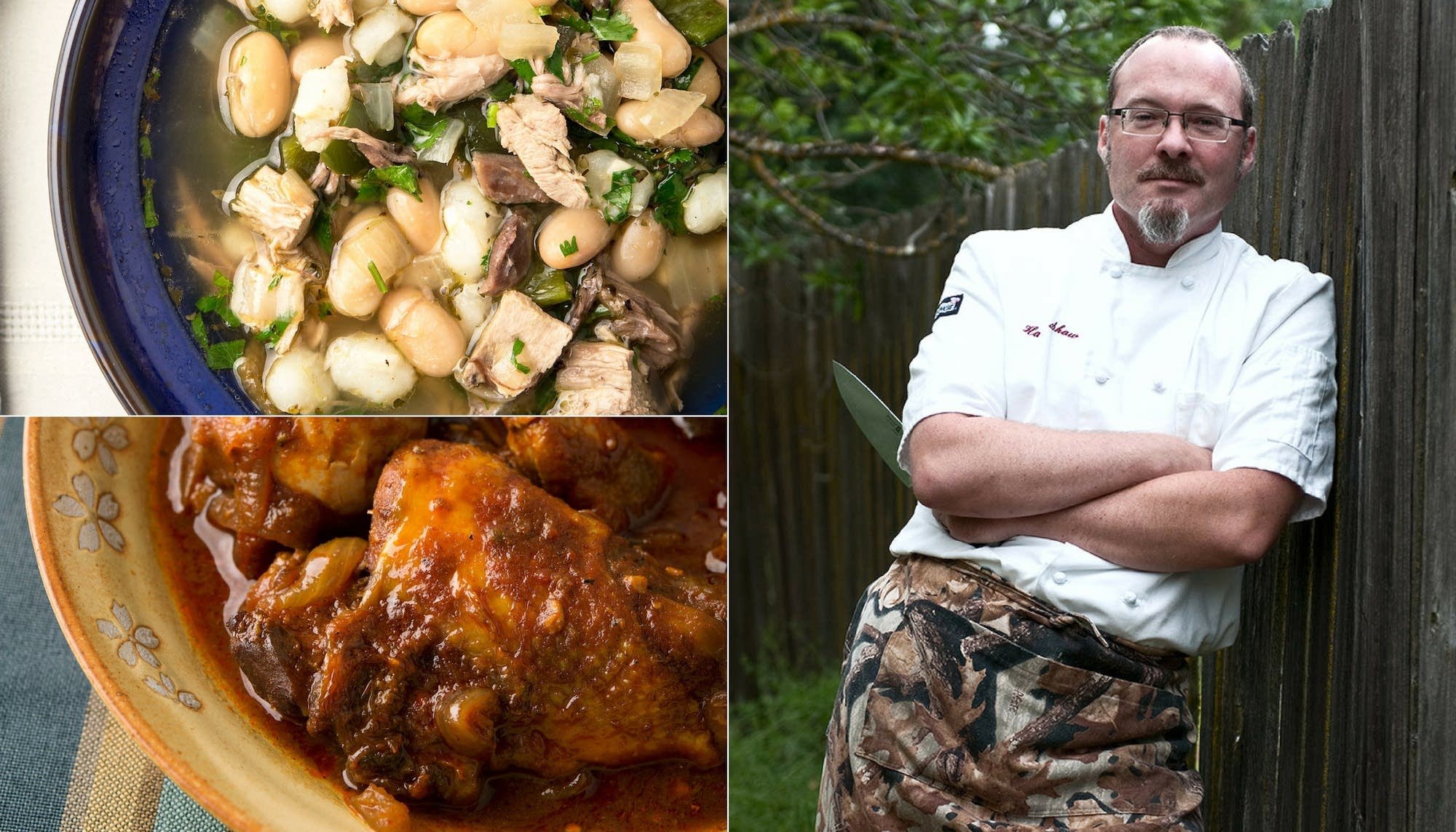 "It tastes like chicken," is something we often hear when someone describes the flavor of another meat. In the case of pheasant, it's particularly true. Pheasant is a game bird found in and near farmland of the Upper Midwest. Biologically speaking, it is a close cousin to chicken. While it's meat is somewhat darker, denser and tougher than chicken, you can cook a pheasant pretty much any way you would a chicken. Hank Shaw is an avid hunter and chef, and the author of the book Pheasant, Quail, Cottontail. He calls it his most accessible book because hunters and non-hunters alike can make the recipes with hunted game, store-bought versions, or easy substitutes. Digital Producer Chip Walton sat down with Shaw to talk about hunting and cooking pheasant, and his process for testing recipes with such unique ingredients. Shaw also shared his inspired recipes for Pheasant White Chili and Pheasant Doro Wat. Whether you're a hunter yourself, know one, or find pheasant at the market, the recipes are great for falltime comfort food.

Chip Walton: We are now in, or very close to, pheasant hunting season in the states that have it. Talk about hunting pheasant and the environments in which you find the birds?

Hank Shaw: Pheasant hunting is intimately connected to agriculture. No agriculture, no pheasants. In the United States, they are not a wildlands bird; you almost never see them where there are no crops. Other birds like grouse tend not to live in agriculture; they live in places with a more natural setting. But, pheasant is tied to farm life. Think: grain elevators, stubble fields, harvested grain and small-town cafes. Pheasant hunting in the Upper Midwest – and really down to Kansas or so – is part of a ritual of autumn in America.

Typically. Later in the hunting season the pheasants will get wise and they’ll move to the edges where there is wetland. You’ll end up in cattails looking for them. It’s thicker cover so they can hide better - and they are extremely good at hiding. You can only shoot roosters. So, the hens – which are drab colored – are so good at hiding that they're known to hold until you almost step on them. More than one pheasant hunter has died of a heart attack when a pheasant has busted from his feet.

CW: As a protein, what is most similar to pheasant?

CW: How are they different?

HS: The difference between a chicken and a pheasant is the difference between someone who hangs out on the couch all day and a marathon runner – the pheasant being the runner. Pheasants are effectively an athletic chicken. They share somewhere north of 80 percent of the same genetic material, so they are very close cousins. They originated in Asia. Pheasants are from Manchuria; chickens originated in Southeast Asia.

CW: What is different about their texture and flavor when cooking with them?

HS: Pheasant is going to be leaner, small, and denser, in the legs especially. The drumsticks are going to be more like turkey drumsticks in that they are going to have that sinew in them that will never break down. You can’t just sit there and gnaw on a pheasant drumstick because you’re going to get this stuff like dental floss that you can’t get rid of. What I do with my pheasants is I always separate the drumstick from the thigh, and cook the drumsticks in one dish and the thighs in another. You don’t have to do that with chicken, but you do with a pheasant or, say, a wild turkey.

CW: You're sharing with us your recipes for Pheasant White Chili and Pheasant Doro Wat. What was the inspiration for each of them?

Now, you’ll never see white chili in chili country; it doesn’t exist in Texas or New Mexico. It’s just not a thing there. It is a thing in the Midwest. It’s a great stew that I like a lot. My version of it takes it back to the origin of chili in the sense that there’s a lot of ingredients in my chili that you would find in the desert Southwest cuisine like green chiles and cilantro. In my version, I typically put in some epazote, which is a Mexican green herb. You don’t have to put it in yours, but that’s what makes it my version. That’s something that people can make that they may be familiar with, and it’s a very good dish.

The doro wat is a dish that I learned to make at my very first restaurant job. In 1992, I got hired as a dishwasher at an East African restaurant called The Horn of Africa in Madison, Wisconsin. I was there for a few weeks, and then one day the sous chef didn’t show up for work. All of a sudden, I effectively got promoted to be sous chef and the owner’s right-hand man, and I learned all of these Ethiopian dishes. I worked there for a year, and it was an amazing introduction into a professional kitchen. This was our most popular dish at the restaurant. It’s arguably the national dish of Ethiopia; it’s a slow-simmered chicken stew that almost always has a hard-boiled egg dropped in it. The reason why it’s so good with pheasant or grouse is because the chickens in Ethiopia are wiry yardbirds. They’re nothing like a store-bought chicken here; they are basically a pheasant. So, it’s a perfect match if you want to get an authentic taste of what that dish should taste like.

CW: What spices are essential to the dish?

HS: The central flavors of it are a mixture called berbere. Berbere is to Ethiopia what curry or garam masala is to India. It’s part of that great arc of the spice trade where they have access to all of the spices. There’s a lot of chili in it, there’s cardamom, fenugreek, a little oregano, some clove, cinnamon. Imagine everything from the spice trade plus a lot of chili. It's a hot spice mix.

CW: Is chicken an exact substitute for pheasant in any recipe?

HS: 100 percent. Absolutely. Now, if you want to make it better, go to a Latin market and get yourself a stewing hen; it is going to be older – three to four years old – bigger, tougher, and more closely connected to a wild bird. If you’re not a hunter, another good option for the recipes in my book is to go out and get a farmers market chicken, a high-quality farmed chicken that has some flavor and structure to it. I’m not going to think you’re a bad person if you go to the supermarket and buy a chicken, but if you want to step it up a bit I would get a farmers market chicken or better yet a pheasant or grouse.

HS: They do sell pheasant. There is a company out of Wisconsin called MacFarlane Pheasants; I believe they are the nation’s largest purveyor of farmed pheasants. Look in the freezer section of your supermarket; you can often find them. Farmed pheasants are still more athletic than your regular chicken but less athletic than a wild bird.

CW: What can fans and new readers expect from the new book, Pheasant, Quail, Cottontail.

HS: It’s my fourth book. It covers poultry – all of the upland birds – and all of the small game like rabbits, hares and squirrels. It even has a little bit on furbearers. But it’s primarily a bird book. Turkeys, quail, pheasants, grouse, partridges, doves, pigeons, all of the upland birds that hunters go after, many of which can also be bought if you’re not a hunter. Of all my books, it’s probably the most accessible for the non-hunter. What’s important about this book is that I’m finally able to give back to the environment from which I take birds. A portion of the proceeds of every book sold goes back to Pheasants Forever and Quail Forever for supporting habitat. These are groups that are very close to my heart. So, there is an active conservation element to this book that I’ve not been able to do before, and I’m happy to do that.

CW: You specialize in hunting, foraging and fishing. Often the ingredients used in your cooking are not things most people can just run out to the market and pick up. What’s does that mean for your writing and testing of recipes?

HS: There is a little bit of a pucker factor in the sense that if you screw it up you can’t go to the store and just buy another woodcock. But I’ve been doing this long enough to where when I’m faced with a scarce game - say a woodcock, snipe or snowshoe hare, something that I’m not able to get a lot of and may only have one or two shots at it – you think very hard the dish. I like to test my recipes a few times. I’m usually really close that first time. And then the second time I’ll often nail it. Sometimes I don’t, but typically I’m very close to where I want to be. The next step, after I’m pretty happy with it, is I send that recipe out to my newsletter readers – who are quite often hunters – and I offer them the ability to test recipes. I’ll put out the call for anyone who has woodcock, for example, to test the recipe before it’s printed in the book. They do the recipe exactly as I have it written out and report back with their process and tasting notes. It’s important for them to do exactly as I have for the singular reason that that game is scarce, and if I tell you to do x,y, or z to a bird or animal it better work.

CW: You’re based out of Sacramento, California, but you get to travel the country and experience the hunt in different areas.

HS: What I really like about that is the ability to pick up on the specialties of each region. Every part of this country has some unique and amazing thing about from the wild food world. It’s the ability to touch those bases and sometimes reconnect with my childhood. Like when I’m on the road on the East Coast, I always try to go blue fishing whenever I can, or catch fluke, because I’ve been doing that since I was three or four years old. And there are others that are like white whales; I’ve been trying to get them.

HS: I finally finished hunting, cooking and eating every single species of quail just last year. I’m very close on all the different species of grouse. You’ll just hear about something. The locals will tell you that you’ve got to go chase this or that – whether it’s a mushroom, a bird, or a big game animal. And you think, “I must do this. I must have this experience!” It’s a cool thing to be able to do.