The science behind those painful wine headaches

by Russ Parsons
Listen: The science behind those painful wine headaches
11:39 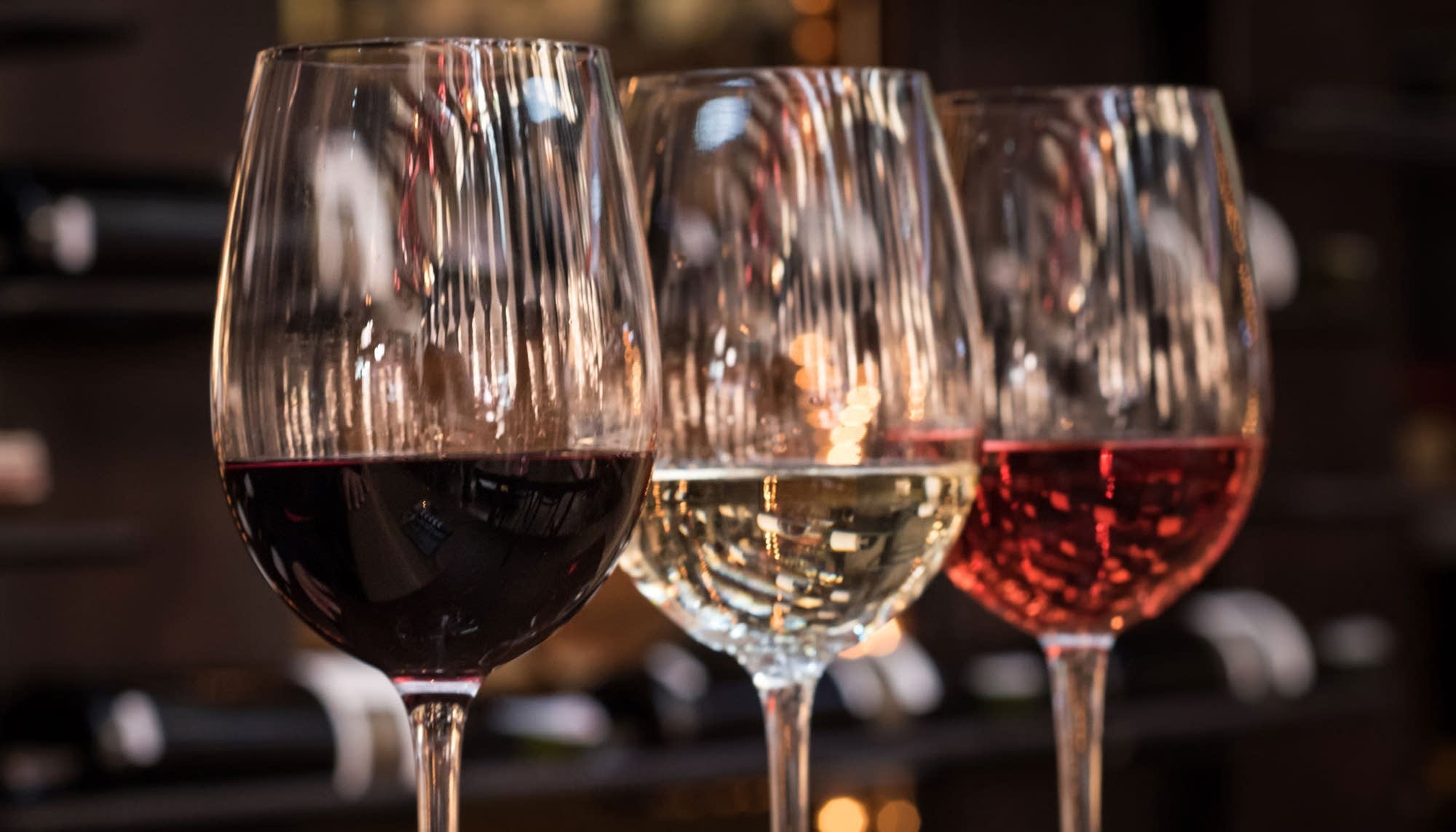 Has this ever happened to you? You’re enjoying a glass or wine – or two – and suddenly your head hurts like someone ripped a Band-Aid off your brain?  Well, you’re not alone. But what happened? And why do some people never get wine headaches? Dr. Nadia Berenstein is a researcher who writes about science, technology and culture in the context of food for many publications and on her blog Flavor Added. She talked to our friend Russ Parsons about the causes of wine headaches and what some people in the wine industry are doing to curb the painful effects.

Russ Parsons: For many people, drinking even one glass of red wine can lead to an incredible, immediate splitting headache. For years some people have argued that it’s caused by the sulfites contained in the wine, but you say that’s not the case. Why do you think sulfites are not to blame?

Nadia Berenstein: I’m one of those people who get red wine headaches. Not with every wine and not every single time. Especially with very delicious wines I will get a splitting headache, which I described once as feeling like a Band-Aid is being pulled off my brain. It is not pleasant.

Basically, I think that we tend to assume that because wines have a sulfite warning label on them that it must be a dangerous chemical that is the source of our pain, but that’s not the case. There’s a small percentage of the population – maybe one in 100 people – that are truly sensitive to sulfites; they’re essentially allergic to sulfites. When they consume food that contains sulfite they have an allergic reaction; they might break out in a rash or have difficulty breathing. The warning label is for people like that.

For the rest of us, we see that warning label and we think that it must be the source of our pain. The truth is that most scientists don’t think that that is the case. Sulfites have been added to wines in small quantities by winemakers since antiquity. They do numerous things. They keep red wines bright. They keep white wines from browning. And they’re also a natural byproduct of fermentation, so it’s impossible to make a truly sulfite-free wine. The quantity of sulfites that wine contains is generally much less than other sulfite-containing foods like dried apricots. So, if you don’t get a headache from eating dried apricots you probably shouldn’t assume that sulfites are the cause of your headache.

RP: And, actually, white wines are often higher in sulfites than red wines.

NB: Yes, this is true. Sulfites tend to be added to white wine by winemakers. But again, we’re talking about very small quantities.

RP: If it’s not sulfites, what do you think it is?

NB: Scientists who have studied this think that it’s one of two different kinds of substances. The first are phenolic flavonoids. These are compounds like tannins that are in the skins and stems of grapes. They do things like give wine its mouthfeel and color. They contribute to the taste and texture of wine. They’re flavor compounds. In the body they not only give us the full mouth experience of a Bordeax, they can also do things like cause your brain to release serotonin or produce different enzymatic reactions in your gut that have been linked to headaches.

The second set of compounds are called biogenic amines. They are chemicals like histamine; they are basically a byproduct of the fermentation process that goes into winemaking. They have also been linked to headaches.

NB: Let’s start with the phenolic flavonoids. Essentially, the different levels of these compounds in different kinds of wines vary depending on the type of grape and the way that it’s produced. Since these compounds are in the skins, red wines have higher levels than white wines. Red wines that are produced in certain ways have higher levels. For instance, highly extracted wines, like the rich and tannic wines of certain regions of Bordeax, are high in phenolic flavonoids. Those things are what make us like those wines, but may contribute to some of the suffering afterwards. With biogenic amines, it’s a different story. Since these are produced by the microorganisms that cause the wine to ferment, you can actually decrease the level of histamines, for instance, in wines by very closely attending to the production process.

RP: Now that we’re starting to kind of understand what’s going on with this, are there winemakers who are working to produce wines that will not have these effects?

NB: Yes. I spoke with someone who has been involved in the production of low histamine wines for this story. His name is Sebastiano Ramello, and he is an Italian wine consultant. He told me that in his work as a wine consultant he would go to tastings and he'd bring home the bottles of wine that he would like to share with friends and family. His mother started complaining of having severe headaches. She finally went to a doctor who told her that she was histamine-sensitive and that she should no longer drink red wine. Now, Sebastiano really loves red wine, but he also really loves his mother; he could not accept this. He started investigating ways to make wine that has low histamine. It’s a more intensive process than you would think. He tells me it’s about controlling the bacteria that are on the grapes and in the production and fermentation processes. You have to be careful and controlled about the conditions in the field and the condition in the cellar. He teamed up with a Piedmont winery called Veglio to produce low-histamine wines, which as of recently you can get in the United States.

RP: Until this type of winemaking becomes more widespread, are there types of red wines that are safer than others for people that are sensitive, and how do you identify  them?

NB: Wines are complicated and so are people. If you are someone who suffers from red wine headaches, it might be difficult to determine what exactly are the compounds in wine that you are sensitive to; there are many potential culprits. The step is to pay attention, take note of what you’re drinking, and try to see if you can find a pattern between the grapes and the aches. If you are someone who thinks you might be sensitive to phenolic flavonoids, you can try to not drink much red wine or try lighter varieties; stay away from the Bordeaux and bottles that are meant to age. You might have more success with wines that are less tannic. If you think you are sensitive to compounds like biogenic amines – for example, if you get flushed when you drink a glass of red wine – you may want to pay attention to grapes and production processes. For instance, wines that are produced with malolactic fermentation, which includes Chardonnays, tend to have higher concentrations of these compounds.

RP: Since this seems to affect some people but not others, is there a genetic component to this?

NB: Yes, there is. For people that are histamine-sensitive, I believe this has been linked with certain genes. But, an important thing to note is that it’s not just genes but environment – the other things you might be consuming. Salumi, nuts, dried fruits - all of these things are high in histamines. So, it might not just be the red wine that you’re drinking; it might be the combination of the red wine and the other high-histamine foods that you are eating. Another thing is that your sensitivity or your susceptibility to headaches also varies depending upon fluctuations in your personal health and your personal physiological state. Hormonal changes, lack of sleep, not having eaten lunch – all of these things make you more susceptible. It’s not just the wine; it’s also you. People who are prone to migraines tend to be more sensitive to wines and to alcoholic beverages in general. For those people that might be something they want to discuss with their neurologist or their migraine doctor.

Russ Parsons was the food editor and columnist of the Los Angeles Times for more than 25 years. He is the author of the cookbooks How to Read a French Fry and How to Pick a Peach. He is a member of the James Beard Foundation’s Who’s Who of Food and Beverage in America, and has won awards from the International Association of Culinary Professionals, the Association of Food Journalists and the James Beard Foundation.
Raw Corn & Avocado Salad
Cucumber Tahini Gazpacho with Crispy Spiced Chickpeas
Summer Squash Escabéche with Mushrooms, Arugula, and Steak
Salmon Cakes with Chimichurri