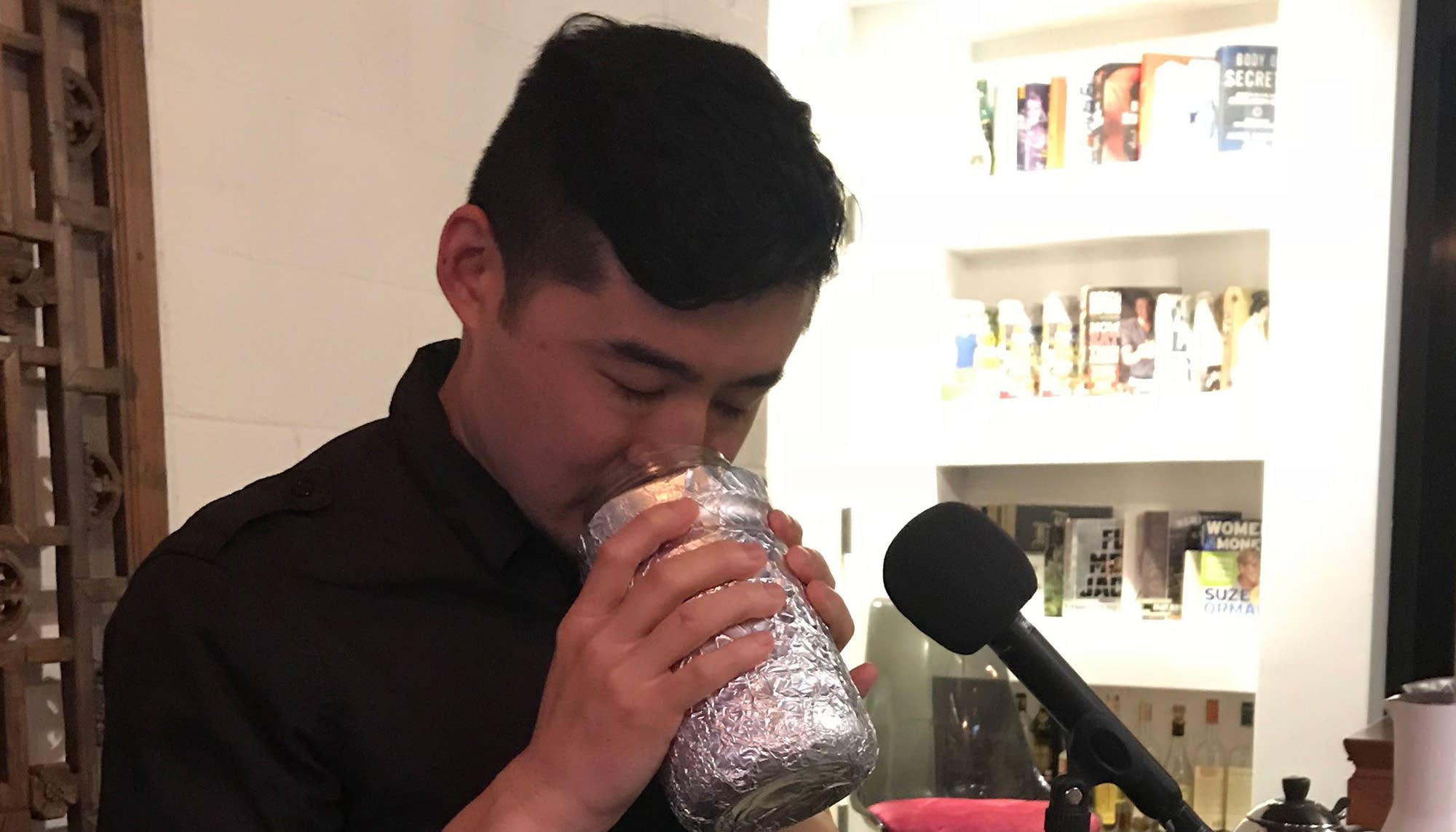 Francis Lam inherited a chunk of puer tea from his grandfather nearly 25 years ago and has never tasted it, partly because he wasn't sure how to properly serve the tea in order to pay the full respect to boty the tea leaves and his grandfather. Recently, he took the tea to tea expert Tim Hsu. Tim showed Francis how to prepare the tea so that you can appreciate the many layers of aroma and flavors. Tim was also able to tell Francis more about of story of where the heirloom tea likely came from as they both tasted it for the first time in a peaceful and somewhat emotional setting.

Francis Lam: Thank you so much for having us today.

Tim Hsu: Thank you. Thank you for coming.

FL: So, this doesn't look like a whole lot. As you can see, this is-

TH: That's a lot. This is almost a pound of tea there.

FL: This was an old Folgers jar with the red plastic cap. I wrapped it in aluminum foil just so light wouldn't get into it. I don't know what this tea is.

FL: My grandfather grew up very poor. And in the last third of his life, during in the post-war boom in Hong Kong, he made money. After he made his money, he devoted much of that money to eating well and feeding his family well with foods that were important culturally that he never had access to before. He became a connoisseur of food and drink. And, at some point before he died, he'd bought this tea – a very old puer. I don't know how much of it. I don't know its provenance. I don't know how old it is. I don't if it was naturally aged or if it was cooked. But he bought it and it was a big deal that he had it. After he died, the family split it up. And so, this is my inheritance: my grandfather's tea.

TH: Thank you. Do you know when he acquired this?

TH: Let's investigate. This is a glass jar, and you actually stored it properly. I hope that you cleaned the Folgers coffee out first.

TH: Probably open it first? Okay. So, a puer usually comes in a cake called puer cake. This is actually a break up of a cake.

FL: It’s possible that my family, when they were dividing it, broke it up.

TH: No. This is professionally broke up. Because if me and you were breaking up the cake, it would be ugly. Here you can see -

FL: The leaves are very separate.

TH: You can see the stem. The stem is there. The leaf is there. They're not in big chunks, and that's very important. It's pretty old, just from the smell of it. What you do is – do not be scared – is you breathe in, breathe out. Breathe in, keep your nose inside. Just feel it. It's almost like a memory. Like, think about walking into one of those old rooms with mahogany panels all the way up in the ceiling. Just think about that space and when you breathe into it, you can basically smell a little bit of memory in it. This is all about memories. Okay?

FL: I can't tell if you influenced my image now, but it smells, to me, so much like really beautiful old wood.

TH: Old wood furniture that the Chinese use.

TH: But it's almost powder-like. There's a little bit of talcum. There's a hint of roses in there that have almost like a cosmetic. The grandma that used to put the face talcum on their face, the white powder. It has a taste and smells of that, if you think about it. For me, just smelling it and looking at it, this could be a Menghai factory. This is basically a recipe cake. The recipe cake start from the 1940s and into the 1960s, then really die down on the cultural revolutions because everything kind of stops. So, it smells kind of like a Menghai tea cake, which is a company in China that makes puer. There are four companies that makes puer and Menghai is one of the biggest. Just because of the stem and leaf ratios in that jar.

TH: Well, the smell is their style. The look is more like, “Okay, what kind of grade it is, what kind of taste they want to create in it. It's like how clothing brands have their own distinctive looks.

TH: Basically, we have less than maybe six gram in here. Okay? And I think that's official enough. This is a nose. This is the device that you use to display your tea and you smell your tea, same as what you just did in it. But this is passable.

FL: Okay. You just filled a porcelain tea cup with a lid with some hot water.

TH: So this is called gaiwan. Gai means lid, wan means bowl. Bascially, a lidded bowl. You actually pour hot water in it to heat it up first. It's already clean, it's just a ritual.

FL: And you have these small white porcelain cups. Is the color important?

TH: Yes. This is more pure and white. It basically shows you what the tea color is. Because you don't want to mask what you're really looking at because we want to test the tea. We want to see the true color of the tea. We want to investigate what this tea is and actually see what the tea can tell us as a story. And to do that, you always want to an environment that is very neutral, you know? And very respectful. It's like drinking a good bottle of wine that you need to have the right glass. You want to bring the lidded bowl closer to your nose. Use the lid to kind of shield the aroma inside, turn it and you smell it. So, when you're doing an old tea tasting, you want to do maybe one-third of tea, and then the rest is water. So, the next thing we call rinsing. We all have to rinse our tea. We pour in hot water over it, in a rotation that we kind of cleanse it a little bit.

FL: Pour the water into the side of the cup and it hits the very edge of the tea and then all the tastes flip over.

TH: You create a vortex in a way.

FL: You strain the tea out right away?

TH: You don't wait. You basically rinse and let it out. So, at this stage we say the tea is primed. It's ready to make now. What you immediately want to do is you want to smell it.

FL: Yeah. It's making me dizzy because I keep breathing in air super hard.

TH: No, you have to understand this point, we are drinking something very rare. And tea is a very specific thing, because you will get tea drunk with this tea. Because there is something called cha qi, which is tea energy. The older the tea tree lives, the stronger it gets. This is the first brew. And you haven't drank this tea before?

TH: Alright, the moment of respect in here. Thank you for bringing this tea to us and thank you for sharing this knowledge and treasure from your family.

What we want to do is kind of divide this into three slurps. And slurping is extremely important. It's not impolite, it's actually polite. What we want to do is aerate it. It's almost like having a wine tasting. I will demonstrate it for us. Follow that water down your throat, and then you breathe with your mouth. And that's one full taste.

TH: Yeah, I can feel it in my cheeks. Traditionally, we call the first brew the aroma of the tea. The second brew that we're going to do is called the body of the tea, which is more of what it's enhanced inside of it.

FL: The technique you're using is, like you said, two-thirds water, one-third tea, and you don't steep it. You're basically pouring the hot water in and then pouring it right out.

TH: What we're doing here is just peeling the onion layer by layer, because you want to taste each layer separately. And this tea probably goes up to at least sixty to seventy times. I'm very lucky to have moments like this when someone has something that they don’t know what it is, but they know that this is my history, this is my heritage. And then we share it. This is very spiritual in a way for me. Thank you again. This is amazing.

FL: Thank you so much for taking me into the journey of this tea. I don't know if it's the tea, but I keep thinking about my grandfather and how he died almost 25 years ago. I've held this gift from him for that long and never had the opportunity to, you know, have him come back into my life and touch me through it. Thank you so much for being here to help me do that.

Francis Lam is the host of The Splendid Table. He is the former Eat columnist for The New York Times Magazine and is Editor-at-Large at Clarkson Potter. He graduated first in his class at the Culinary Institute of America and has written for numerous publications. Lam lives with his family in New York City.
Raw Corn & Avocado Salad
Cucumber Tahini Gazpacho with Crispy Spiced Chickpeas
Summer Squash Escabéche with Mushrooms, Arugula, and Steak
Salmon Cakes with Chimichurri