Create unique flavors of summer cooking with tomatoes and watermelon 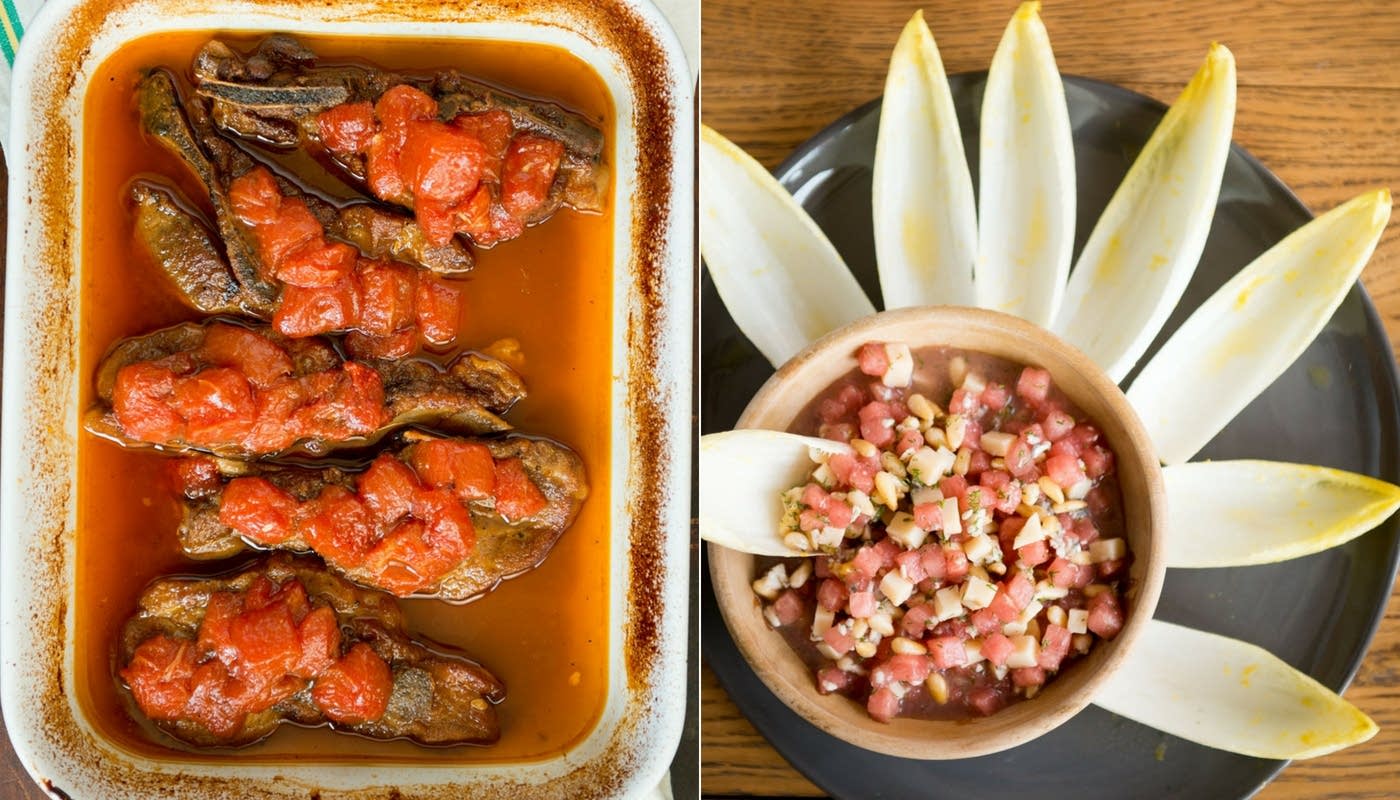 As we near the end of summertime, we have two things on our mind: watermelon and tomatoes. Thankfully, Vivian Howard is right there with us. Vivian is a terrific chef, author of a best-selling cookbook Deep Run Roots, and the star of the PBS show A Chef’s Life. But most importantly, she’s a Southern cook with a lot of ideas for cooking with these summer beauties. She talked with contributor Shauna Sever, and shared her recipes for BLT Dip, Watermelon Salsa and Endive, Stewed Tomatoes and Pork Shoulder Steaks in Red Curry-Braised Watermelon.

Shauna Sever: We're nearing the end of summer, and I've got a plan to eat as much watermelon and tomatoes as humanly possible before the season ends. Of course, we're all eating plenty straight-up, but I want some of your clever ideas for making the most of them. Let's start with watermelon. I know this is a favorite of yours. If you're faced with some great seasonal melons, how do you pick a good one?

VH: It is hard to really know. There's lots of folklore around it. If you're able to choose one out of the field, the stem is telling; some people say that it should be curled like a pig's tail. The bottom should be somewhat flat and slightly yellowing. But even then, I find that all the signs can be there from the outside, and then sometimes you cut into it and it's either overripe or just not that sweet. I don't let that bother me. There's a lot of things you can do with a less than perfect watermelon.

SS: Do you prefer seedless or not, or is there a difference?

VH: I think that a seeded watermelon generally has a sweeter heart and a better texture, but for the most part I buy seedless melons because it's just such a pain to fish out all those seeds.

SS: What can we do with watermelon flesh? Can you give us a couple ideas, both sweet and savory, to make the most of it?

VH: Sure. If I cut into a watermelon and it's not perfect, I’ll use melons that don't have firm flesh and lots of crisp, sweet flavor to make a watermelon tea, an agua fresca, or a watermelon margarita. That melon is saved; you can always use it.

Something that I do with almost all of my melons, good or bad, is we use the rind to make preserves or pickles. Pickled watermelon rind is an integral part of our winter kitchen, because we pickle so many rinds during the summer. We'll take those and wrap them in bacon and then roast them and make a delicious, tasty hors d'oeuvre. We'll also make preserves, much like the sweet strawberry preserves or peach preserves, because the southern kitchen was often about not wasting anything. We put those preserves in a biscuit with country ham.

I love to braise watermelon. When I was working on my cookbook, I was determined to find a preparation of watermelon that saw heat. I love to take watermelon, red curry paste, honey, red wine vinegar, and whisk that all together. Cut the watermelon into big one-and-a-half to two-inch chunks and pour that liquid over some pork shoulder, then braise it slowly in the oven at 350 degrees for about two-and-a-half hours. Surprisingly enough, the watermelon holds its shape and some of its texture. When it comes out of the oven, you've got this thin, vibrant, punchy liquid that tastes like both watermelon and red curry. Then you have chunks of watermelon that when you look at them you’ll think they are tomatoes, but when you eat it, it's distinctly watermelon. That's one of my very favorite things to do. [Ed. note: see recipe for Pork Shoulder Steaks in Red Curry-Braised Watermelon.]

I also am a big fan of watermelon with salty cheeses. This year, we're seeing a lot of stracciatella cheese, which I think is an evolution of our interest in burrata. Stracciatella literally means stretched in Italian; it's creamy, milky, and a little salty. I find that it's delicious with watermelon; much like you would have tomatoes over it in a salad, watermelon works as well.

Another thing I love to do is cut watermelon really small and treat it like a salsa. I do this one salsa with pine nuts, white anchovies that have been minced, a little bit of parmesan cheese – in little chunks, not grated – mint, and olive oil. It makes a great dip. You can use endive spears to pick up the watermelon salsa. People are always surprised at that one.

SS: That sounds amazing. You're drawing a lot of parallels between watermelon and tomatoes, and tomatoes are the next thing I wanted to ask you about. This gives me hope because tomato season is a little longer, right? I think a lot of the interesting heirlooms start coming in early fall, so we get a little more time to play with tomatoes.

VH: Yes. Here in the Carolinas we have a strong tomato presence in July. In August it wanes. Then in September and October, we have what I would call the last hurrah; I think those are some of my favorite tomatoes, maybe because everything else has moved on and we're holding on so tightly to the promise of a delicious tomato.

SS: How are you cooking with tomatoes right now? Do the ones that you get earlier in the season get a different preparation from the ones you get later?

VH: Not necessarily. I think different types of tomatoes are good for different things. I love Cherokee purples for slicing, for salads, for sandwiches. My all-time favorite thing to do with a tomato is just white bread, mayonnaise, salt and pepper, and thick slices of tomatoes; I think heirloom varieties are wonderful for tomato sandwiches and salads. Some of the firmer tomatoes – like plum tomatoes or beefsteak tomatoes – I prefer for canning and stewing. One of my favorite things to do during the summer is making stewed tomatoes. Basically, you peel the tomatoes, cut them up into rough chunks, stew them with some onions and garlic – I use bacon fat to caramelize the onions before I add the tomatoes – and then throw in some basil at the last minute. In the South here, we would thicken that with a little bit of leftover cornbread so that it's not incredibly soupy. I love to eat that with grilled fish or roasted chicken. Put a dollop of basil pesto on the fish or the chicken and you have this perfect marriage of tomato and pesto. That's something that we've done quite a bit this summer.

I'm very big into preservation. One of the things that we've been doing that I'm really excited about is this thing called – I have to come up with a better name for it – but I like to call it pea helper, in the same spirit as hamburger helper. It’s a condiment that’s made of caramelized onions, bell peppers, tomatoes, vinegar and a bit of brown sugar, and that all stews together. If you cook a pot of beans or field peas, you stir this condiment in toward the end of cooking, and everything melds together. It really makes your pot of beans or your peas so much better. That's why we're canning little jars of that for Christmas presents this year. Hopefully you'll be on the list, Shauna.

VH: Yes. Several years ago, I did a lunch at my restaurant that was for a group who was in eastern North Carolina to study whole hog barbecue. I decided that I would serve them a vegetarian lunch because I was not going to compete with the barbecue. As the centerpiece for the lunch I served this tomato sandwich. It was thick slices of Cherokee purple tomatoes. I put some pickled red onions on there, because if you know me, you know I'm an acid hound. And we made a mayonnaise with smoked corn. It was served on this sweet potato onion bread that we make at the restaurant. The smoked corn mayonnaise lends a BLT quality without the B or the L, and it's something that people just fell in love with. Now it's our bread plate during the summer at the restaurant; we serve sliced tomatoes, the onion bread, aioli, pickled onions, and you can assemble your own sandwich.

SS: I have to get a reservation for that, and also on the list for your genius inventions. Thank you so much, Vivian, for talking with us.

VH: Thank you, Shauna, thank you.