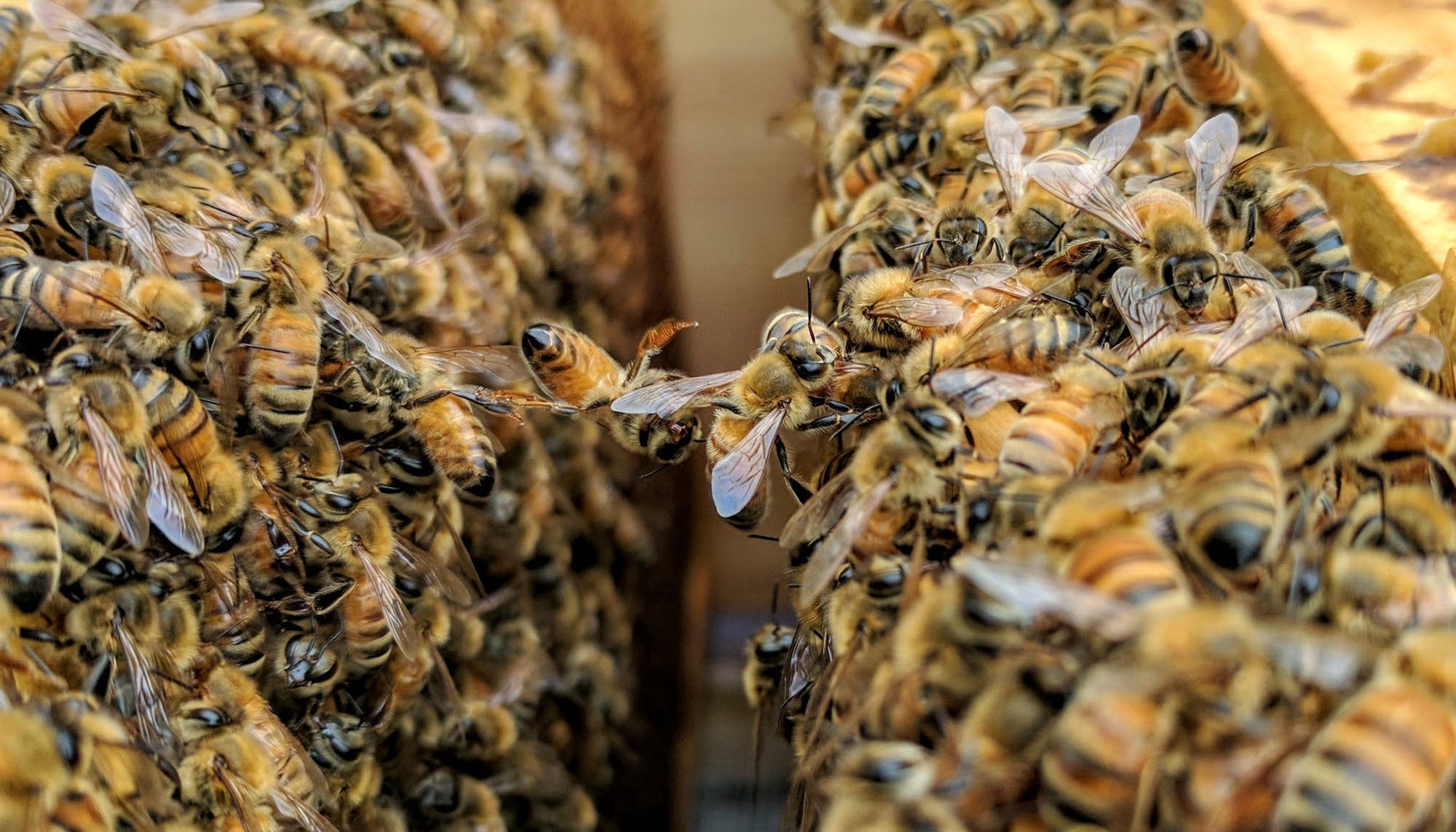 About 12 years ago, beekeepers started noticing that their hives were getting a little bit weird. Bees were dying or going missing, and it started to happen at shocking rates. Soon, there was a panic, and scientists couldn't exactly understand why bee populations were seeing such a drastic decline. They called it the “mystery colony collapse disorder” and started to imagine a world and a food system without bees. Over a decade later, thankfully, we still have bees, but are we out of the woods? For an update on what's going on in bee health, Francis Lam talked with bee specialist Bernardo Niño, educational supervisor of the California Master Beekeeper Program at University of California, Davis and head of research and development at UBEES.

Francis Lam: Bernardo, can you describe for us what a bee colony is?

Bernardo Niño: A bee colony is defined as the bees in the colony, the comb, and the developing bees. It's something that people use often interchangeably with hive, but the true definition of the hive is the bees plus the box; it’s just an easier way to put it.

BN: There's lots of ways for hives and colonies to get started. But from a managed honey bee colony perspective, you could start in the spring, either from packages, which is essentially like a shoebox full of bees – about three pounds of bees plus a queen – and you literally shake the bees onto the equipment, they will start drawing wax and the queen will start laying eggs. The queen has the capacity to lay around 1,500 to maybe 2,000 eggs a day, and so, the colony can grow quickly, especially if proper nutritional resources are in place. They generally forage on pollen to provide protein for the bees in the developing brood, and the nectar, which can be cured into honey, also supplies carbohydrates to help draw the wax out and basically survive.

As the colony builds up, they can get up to 60,000 individuals in a colony. At that point, they can really be driven towards honey production, especially if the forage is appropriate for them. If there is enough resources and enough healthy bees, they can make a substantial amount of honey per colony. As the season progresses, in different parts of the country, if the nutrition starts becoming restricted, their growth slows and their population declines. They try to get to a reasonable amount of healthy bees to go through the winter. Obviously, the winter can be very different across the country, and so a lot of commercial beekeepers will actually move bees to warmer climates to overwinter them.

FL: As part of the natural order they will start to die off if you're going through the winter. The bee colony’s population size will contract.

BN: Colony collapse disorder is actually defined as a syndrome. It has a specific set of symptoms. It's often confused with colony decline or colony loss. A colony can fail from varroa mites or poor nutrition or a number of different reasons. But with colony collapse disorder, essentially, the bees just vanish. You have a lot of young bees and a queen, but the foragers are gone, a lot of the house bees are gone, there's a delayed onset of robbing – where other bees will basically take the resources from a colony for their own – there's a delay in pests, there's no dead bees on the ground in front of the colony. Typically, with a pesticide kill or other things that can kill colonies, you would see dead bees in front of the colony. With colony collapse disorder, that's not the case. In addition, there's another criteria where you have low varroa mite and low nosema levels. All of these things have to be in place to be defined as colony collapse disorder. A lot of these are qualitative data, so it's also tricky to diagnose. And because there's no known cause of it, it's really disconcerting because, again, your bees just vanish.

FL: We still don't know what the story is? For a while I remember hearing people say it's our cell phones that were screwing up the bees’ natural radar, and they don't know how to find their way home.

BN: I can say for certainty it's not cell phones. That was a very, I would say, poorly done study that was taken out of context and then gobbled up by the popular media. But there was a recent study in 2017 by some folks out of the University of Maryland that looked at some of the different characteristics of bees in these colonies that were failing from – or had symptoms of – colony collapse disorder, and they were able to identify aspects of those bees to work towards systems where we can have something that's quantitative to diagnose these colonies. It still doesn't answer the question of what causes it, so it still doesn't drive us towards prevention. But it's at least gaining more information to maybe solving the puzzle of what's actually happening.

The general thought is it's a suite of effects happening synergistically that creates the perfect storm to have these bees decline. Maybe it's poor nutrition combined with pesticide exposure, combined with high viral levels from either interacting with other bees or the varroa mites will also transmit viruses within the colony. Maybe one of these things acts as a tipping point, and then you have the colony collapse, but a relatively recent paper is discussing the digestive tract and the gut health of the bees as potentially diagnostic.

FL: And then, from a lay person's perspective, for a while we were hearing these stories and it was very apocalyptic. It was very much like, “We're going to lose bees, they're going to go extinct, and our food system's going to crumble!” I feel like I've been hearing that less and less. Is it just because we started ignoring it or is it because we're finding ways to overcome it?

BN: I think the story is beekeepers, especially at the commercial level, are finding ways to overcome this. For example, if I had 1,000 colonies and I lose 500 of them throughout the year, I can send them out to almond pollination, which is a lot of nutritious pollen for the bees. I can build my 500 up and then split them again, so now I still have 1,000 colonies. I'm able to keep the numbers up, but that also comes at a cost. I would rather have 1,000 colonies going in that are strong, and then send them for honey production or use them for different tasks. If I'm merely trying to run numbers so I can make my pollination contracts and provide pollination services throughout the country, it's at a cost of other aspects I could be using the bees for. However, beekeepers have been working hard and trying to solve some of the other issues affecting honey bee health, and they've actually increased the number of colonies, especially since 2006 when we had a large dip.

We always hear, especially when I talk to people outside of the industry, that we need to save the bees and that the honey bee is going extinct. The reality is honey bees are not going extinct. We still experience high annual colony losses, which hover anywhere between 30 to 40 percent. If you put that in context of other agricultural animals or livestock, to lose 40 percent of the nation's cattle would be catastrophic, but that's an annual loss for honey bees. Good beekeepers are able to maintain and increase their numbers by, again, splitting and doing some more complex management to make sure that we have enough colonies in the United States to carry out pollination services.

I tell people it's tough being a honey bee colony in the United States. There's a lot of transportation involved that is stressful. The monoculture that's happening is challenging for the bees as well. Agricultural pesticides, in addition to some of the pesticides I have to put in my own colony to mitigate some of the pathogens – all this is very challenging. I would say it's not becoming easier to manage colonies, both commercially or at the backyard level, but as we learn more through research, we're able to equip beekeepers with tools to better manage their hives and to create scenarios where they're still able to be successful.

FL: That's good news. But then, there are wild bees and other pollinators as well; it's not just honey bees. If people wanted to help, should we be using those pollinator houses that you find in gardening stores or something like?

BN: Absolutely. I feel that honey bees often get the spotlight as they're charismatic, they're easily managed compared to some of the native pollinators. Non-apis pollinators are very important, both from a production standpoint and from an ecological standpoint. One thing people can do is provide the bee hotels and plant forage provides habitat for the non-apis pollinators as well – this includes flowers, blooming plants, trees. Honey bees specifically do well with fruit trees. The forage mix needs to be a number of different plants because bees need different sources of pollen for their diverse nutrition. Planting a few different varieties, both for pollen and for nectar, would be ideal.

FL: It’s great to know that there's something that regular people can do to help along. Thanks so much for coming in, Bernardo.

Francis Lam is the host of The Splendid Table. He is the former Eat columnist for The New York Times Magazine and is Editor-at-Large at Clarkson Potter. He graduated first in his class at the Culinary Institute of America and has written for numerous publications. Lam lives with his family in New York City.
Tepsi Kebap
Neapolitan Cookies
Golden Fried Rice With Salmon and Furikake
Tagliolini in a Prosciutto and Poppy Seed Cream Sauce