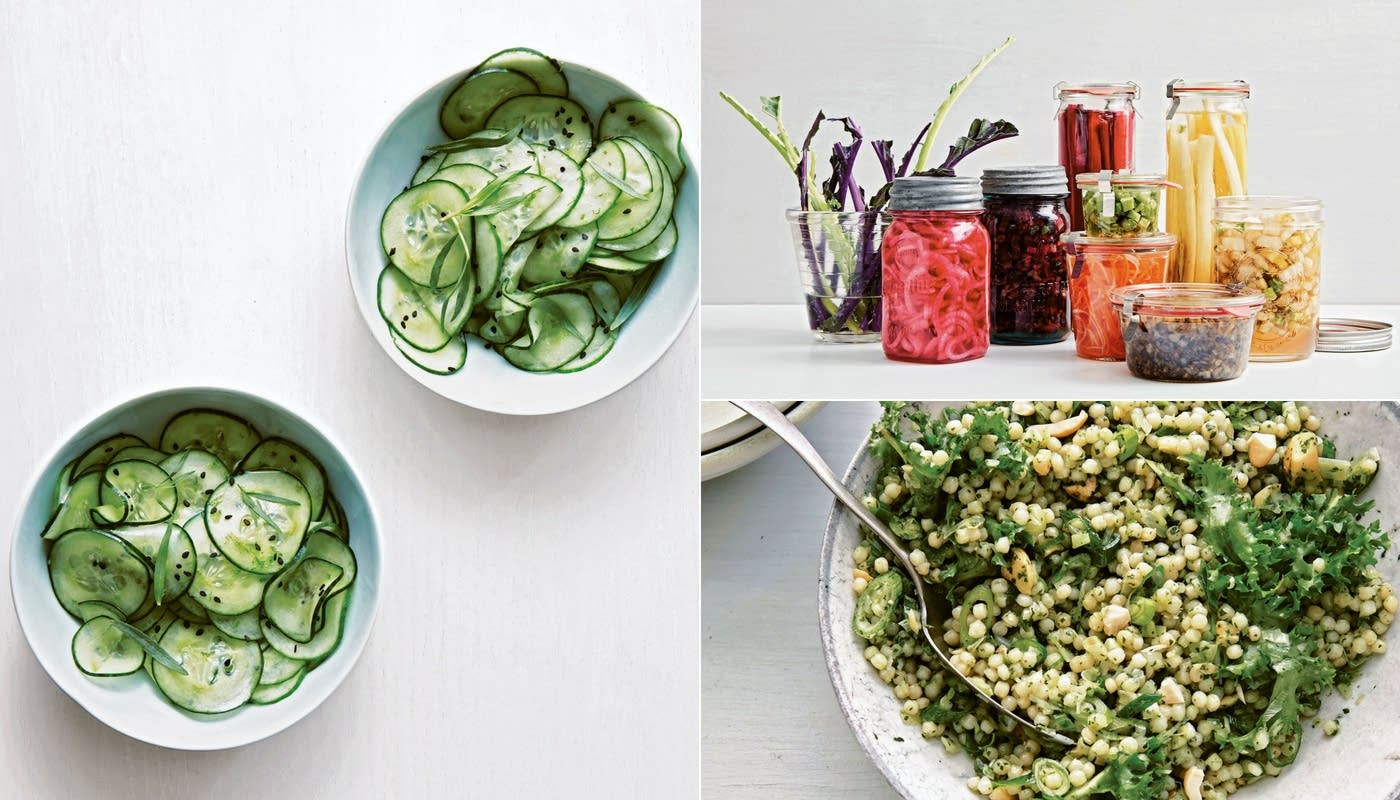 Ilene Rosen has been making salads professionally for decades and recently published her first cookbook on the subject, Saladish. Rosen's theory in the book is that by bringing together a wide range of ingredients that emphasize contrasting textures and flavors you can build a better salad. Contributor Russ Parsons talked with her and got the recipes for Cucumbers with Black Sesame Seeds and Sweet Lime Vinegar, Couscous with an Allium Mix and Quick Pickled Red Onions. Enjoy many of our other favorite salad recipes from our Splendid Table Pinterest page.

Russ Parsons: For most cooks, salads often seem like an afterthought. There's a little bit of lettuce, a couple of other things that are added mainly because you need color, and a standard dressing. But you take a very broad and creative view of salads, even including ingredients like tofu skin and rice cakes. All of which begs the question: How do you define salad?

Ilene Rosen: You're definitely right. It's a big, broad, bold definition. It can contain almost anything: grains, beans, legumes, proteins – or not – but usually vegetable focused. It can be cooked, raw, or a combination. Temperature is key; I'm a big proponent of serving everything at room temperature or cold. I think that makes the definition feel more fluid and perhaps easier to convince others that it's a salad. Anything that's available is fair game.

RP:  What are the hallmarks that make a salad great? What makes it work?

IR: It's all about contrasts in texture and flavor. Some textures – toothsome, fluffy, crunchy, crispy, hefty – need to be met. Also contrast in flavors, too; there's richness, sharpness, sweetness, saltiness and spiciness. As soon as you hit a couple of those different things and put it together, it all starts to work. I don't think that every single thing has to be colorful – I think monochromatic things can work as well – but it needs to be beautiful and visually appealing.

RP: Can you give me an idea of the visual aspect of a monochromatic subtle? What makes it beautiful?

IR:  Something that's simple can be beautiful. I have a minimalist side to me as well as a maximalist side. There's a simple cucumber salad in the book that has a sweet lime vinegar, tarragon and black sesame seeds. They're thinly sliced cucumbers, and I think that is something that looks very elegant, just by being itself.

RP:  One of the things I love about the book is the asides that reflect your attention to detail. There's simple things like toasting the grains before you cook them, crisping and curling the shaved vegetables in ice water, and defining what size and shape bowl you want things to be served in.  That kind of finesse is important in all kinds of cooking, but why is it especially important with salads? What are some of your favorite tips?

IR: I'm not so sure that it's more important with salad, except perhaps people think of the whole course with the salad as an aside; it really deserves as much attention as one gives all the rest of the things that go on the table. As far as finesse goes, there are two tips that come to mind. One is layering, which when I make food at my shop is particularly important if something is going to be served, not necessarily the moment that it's assembled, but a little-to-quite a bit later. If you have delicate things, perhaps a sprig of an herb or a gentle leaf that's mixed in with heavier items and dressing, we layer it in instead of tossing it all together. Then, as it's going into its serving plate, the more delicate pieces can be layered; it helps them from being mangled, crushed in and deflated.

Another place where I've been using that lately, we are doing something with roasted eggplant and it has pickled shiitake mushrooms, chive buds and Enoki mushrooms. Most people may or may not know that Enoki mushrooms are quite delicate and bright white. So, I mixed some into the entire salad and then as I layer it in, I just add some on top. Not only does it keep them from being crushed at the top of it, but as you go down the bright white color remains because it hasn't been all tossed with the darker dressing.

Another thing that is important to know is I really I worship leftovers, and I think the next day things can taste just as well or even better, they just may not look so fabulous. So, if you go through, pick out wilted herbs or leaves or whatever pieces of greens are there, replace them with fresh ones, and add a little bit of reserve dressing or olive oil and salt to taste, it can make today just as good as yesterday.

RP:  You allow a lot of room for cooks to adapt your ideas and make them their own. You've got a series of flow charts; there's one for eggplant salad I really loved. Can you give us a taste of how this whole flow chart approach works?

IR: It was hard for me to initially, when working on the book, to force things into very specific recipes. I think sometimes it might say in the book “a quarter-cup of dill,” but if you didn't have a quarter-cup, you only had an eighth of a cup, that might be fine too, and then make up the rest with parsley. There's nothing wrong with that. The idea of always slavishly following a recipe goes a bit against my intuitive, spontaneous way of thinking.

So, we have a few of what you're calling flow charts, or grids. They give you a basic way to cook a vegetable – in this case, eggplant boats – and then four different approaches to finishing them. The idea being, of course, you could certainly follow them, but it should hopefully give you the idea that you can come up with something on your own. You can use an idea from something you made yesterday from this book, another book, from your own head, or from things that you have. Take something and approach it any number of different ways and hopefully that inspires thinking to goes in different directions.

RP: One of the things that I think keep cooks coming back to the book are all the little pantry staple gems that you include: quick pickles, chutneys, salsas, and flavored vinegars. What are a few of those that you think are indispensable, ones that you use a lot in your own home kitchen?

IR: I'm glad you said that because personally I love condiments. I could make a meal out of just condiments. Pickled red onion may be the most ubiquitous perennial favorite for us at the shop. It can enliven a basic, simple green salad that has nothing else on it. It works on a sandwich. It's a great condiment for hot dog or a burger. It can be on a charcuterie or salumi platter. I would even have them with scrambled eggs. It’s a universal bit of deliciousness.

Another thing that I love – that's slightly more unusual – is sweet lime vinegar. It's on the cucumber salad that I mentioned earlier, which is a refreshing warm weather side dish. But, the sweet lime vinegar itself is versatile. It can be technically considered a shrub, or a fruit-infused vinegar, and you can have it with seltzer or in a cocktail and just drink it. The sweet lime vinegar, a/k/a lime shrub keeps forever in the refrigerator. It's a really handy thing to keep around.

RP:  When people hear about these things, they may imagine that there's this long, complicated process. But these pickles – like the red onion – are incredibly easy. Can you walk us through the process?

IR:  The quickest pickle you can make is to combine vinegar and as much sugar to your taste, and heat it up. When it boils, the sugar is melted or infused with any other spice that you want to put in there. And then you pour it over your sliced or diced vegetables. And you're done. It really is that simple, and it's something that you can play around with and add all sorts of different things into.

Another thing I enjoy pickling are the stems of vegetables that you normally don't put into the salad. If you’re sautéing kale or chard, leave the stems long – or you can dice them up – and save them in a Ziploc bag in your fridge. Then when you have enough, you can quick pickle them.

You can also take pickles that you may have bought, already made, and save the liquid that remains in the jar. You strain it out, boil it up and use that a second time.

RP: Tell me about toasting grains. A lot of times when people have farro or barley or something like that, they simply boil it, but toasting brings out a richer flavor. How do you go about doing that?

IR: It can be done one of two ways. It can be on the stove top in a pan or it can be a sheet tray in the oven. Either way, shake the pan periodically, 10 minutes or less usually does it. The nutty flavor that's added is something that's pretty special and comes through the dish in the end. Particularly when using the pearl couscous, visually it also adds something because some of the grains take on a darker color. But the nuttiness is really what you're going for.