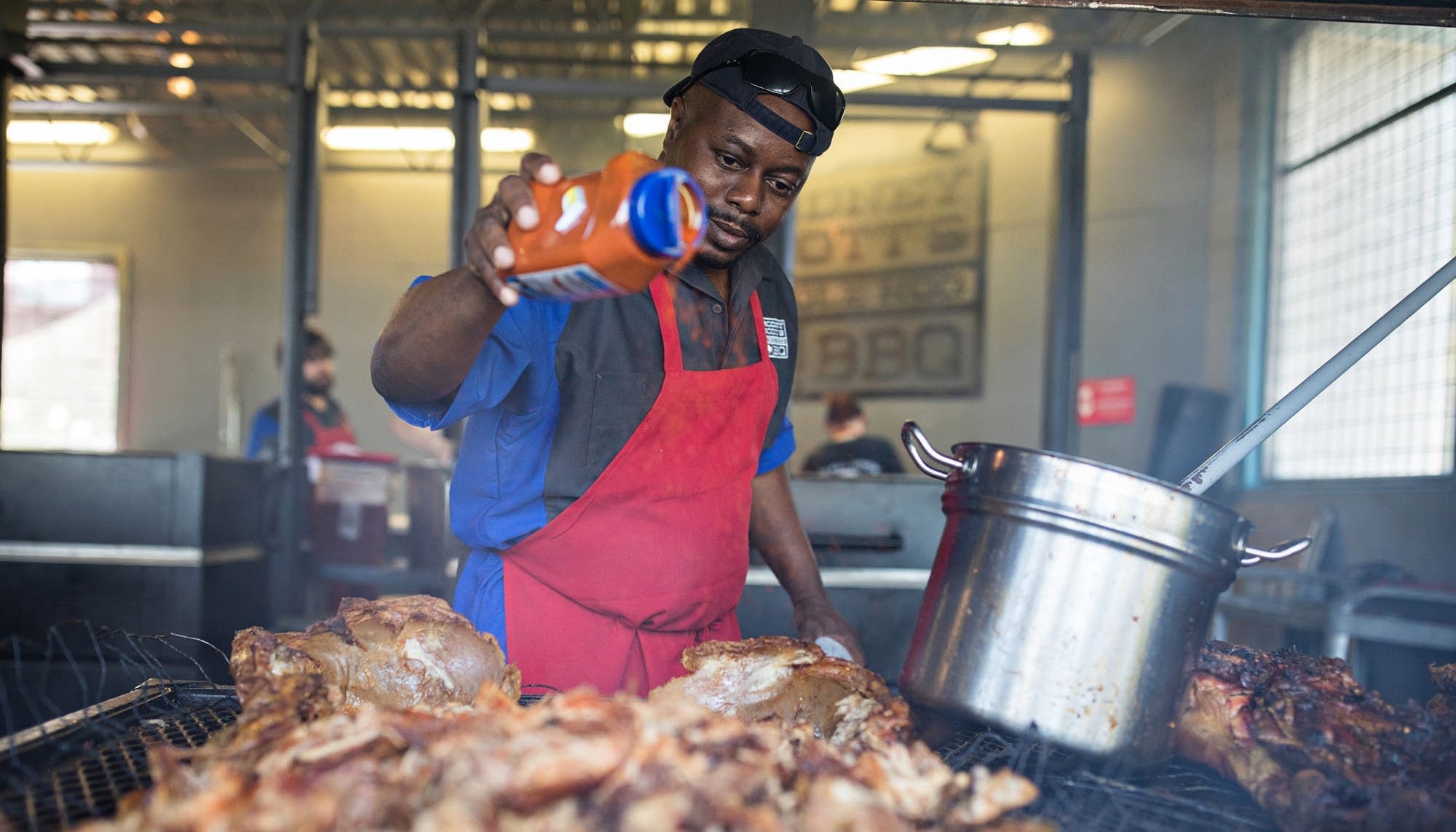 When we started thinking about big cooking projects for our Project Cooking episode, one of the first people that came to mind was Rodney Scott, the pitmaster and owner of Rodney Scott's Barbecue in Charleston, South Carolina. Scott's specialty is whole hog barbecue. Cooking whole hog is a larger-than-life experience that requires not only skill and experience, but also the passion required to command the pit for twelve-hour stretches of time - meaning you could be up all night tending to the hog. This year, Rodney Scott won a James Beard award for his culinary acheivement. He attributes his success to a lifetime spent learning the art of barbecue; he shared some insight and stories on whole hog barbecue - including the barbecue that led the scariest night of his life - with Francis Lam.

Francis Lam: I think your style of whole hog barbecue is the ultimate cooking project. You have a slogan: “Cut, Chop, Cook.” Tell us what that's about.

Rodney Scott: “Cut, Chop, Cook” pretty much describes how my life was. We went out every day and we cut our own wood. We brought it back to the shop, split it, and cooked with it. We burned it all down to cook because that was our only heat source.

FL: That was your life, and this is a full-scale lifestyle; it's not just like a thing you cook.

RS: This is my entire life. This is all I've ever done. This is all I know. My family opened a little general store back in 1972, and we did barbecue on Thursdays. The whole heat source was all about wood. In the south where I grew up, you had chores and you had duties. Part of my duties was to help cut the wood to cook hogs.

FL: How long does it take you to barbecue a whole hog?

RS: To barbecue a whole hog it takes at least 12 hours – the way that we do it. We burn our wood down the coals, so you have to slop fire it low and slow every 10 to 15 minutes for about 12 hours.

FL: You're moving coals from your burn box to underneath the hog every 10 minutes for 12 hours. Do you do this through the day or through the night?

RS: Now that I have a staff – thank goodness! – I don't have to do it all night anymore. But it still goes on throughout the day as well whenever we have a rush order or a backup order. It's pretty much an all-day or an all-night process.

FL: Can you describe what a whole night cooking hog is like?

RS: A whole night of cooking hog is going to be long; it seems longer than 12 hours. You’ve got to get your fire going, then get your hog going. Once you've got it on a pit, you've got the coals going under the hog, it's dripping nice and slow, then you're basically sitting there trying to stay awake and be careful cooking all at the same time. It seems brutal if you're a person that's used to sleeping at night.

FL: People who know you know you're a person who likes to party. Are you partying all night long, or is it quiet?

RS: Well, I party until at least about 2 a.m. That's when everybody gives up and go to sleep. [laughs] So, I'll party with the slow jams, you know, the nice mellow stuff. And then about 2 a.m. I try to turn it off and have some quiet time until about 5 a.m. Oh man, when you’re sitting there and you’ve been cooking a hog all night, then you see the sun, that lets you know you're almost done. You're getting to that finish point. You feel like you got that jump start on the entire world because you saw the sun come up. And you have lunch ready. It's a plus.

RS: Lunch is ready to go!

FL: Let's get back to the cook. You said something about the drip; tell me about the drip. What are you looking for? What's a good cook like?

RS: If you got that hog on with the hot coals under it, you want that drip to have that nice little “tss, tss, tss.” That slow drip, which is really the fat falling into the hot coals. That lets you know that you're cooking at the right pace and the right temperature. Everything is just where it needs to be. As opposed to if it's sounding like rain and it's real fast, you need to back up and slow it down because you're taking a chance on the whole hog flaring up. And you don't want that; that's not a pretty thing. You're at risk of losing the entire animal.

FL: All that fat is going to come down and set a fire?

RS: Yeah. All the fat will come down, it'll blaze up, and it'll burn the entire animal. Then you've wasted whatever amount of time the you’ve already got into it because it's ruined.

FL: Has it happened to you before?

RS: So many times – sooo many times. For a pit guy to say he's never had a fire, he might be telling you a lie. It's a high-risk procedure the way that we do it; you've got to be careful, you've got to be mindful of what you're doing, and how fast you're firing your hog.

FL: Of the thousands of hogs you've cooked in your life, are there any that really stand out in your mind? Are there any nights that you remember?

RS: Oh yes. There's one that I will never forget. We were in Mississippi, down in the Delta, at Dockery Farms. Man, that was the scariest night of my life. The pit flooded with water just before we started cooking because a big storm came up. There were two tornadoes a couple miles away; there were supposed to be tornadoes down the street. And we were like, “Man, this is not going to work. What are we going to do?” I said, “We’re going to make this happen!”

We go back down to the pit, and it’s flooded. We took trash can lids, put hot coals in trash can lids, sat them in the water under the hog. We heard spooky sounds all night. We had to bring wood from the shed that looks like The Blair Witch Project. I'm telling you, there were sounds and weird things we’d seen and heard all night. And when the sun came up, I was like, “Thank God, we are still alive. We survived.” We were so afraid that we sat in the vehicle all night; we would not get out. We just parked right at the pits. I've spent many a night outside, but this place was spooky. And the next day when we took that hog off, it was unbelievably great. It was the best hog I've ever done. I've never done one better; I don't think I could do one better.

FL: Maybe it was haunted, but the ghosts were trying to do good things for you. They were helping you along.

RS: Well, I appreciate those ghosts, but I'll take my own chances from here on out. [laughs]

FL: What are your suggestions for how a home cook might get started?

RS: Home cooks are some of the best out there, and they go unrecognized. I suggest, for one, you want to be careful. You want to be prepared and safe. You want to make sure your pit is in a safe place before you light it up. And instead of going with an entire animal, I suggest they do a butt or shoulder, something that's smaller, something they can control and understand a lot better as a beginner. You could do it in a few hours, still have beers with your neighbors and friends, and not be committed for half a day. You could sit there and relax a little bit. But don't forget the music. You’ve got to have the music there.

My music is kind of like wine, once it's aged a little bit I'm more into it. For example, I like a lot of 1990s rap and R&B. One of my favorite artists is Anthony Hamilton; “The Best of Me” has got to be my favorite song ever. I play a lot of upbeat stuff like Bruno Mars, Cardi B, and Drake. I might twist that up with some Aretha Franklin, Kurtis Blow, Marvin Gaye, James Brown, The Gap Band. I like to mix it up because you never know who's going to visit. You bring back memories for them with that music, the same way you do with your food. For me, that's that ultimate high, music and food together.

FL: It’s not just about what's on the plate, right? It's the whole experience. Thank you so much, Rodney. It's great talking with you.

RS: Thank you for having me.

Francis Lam is the host of The Splendid Table. He is the former Eat columnist for The New York Times Magazine and is Editor-at-Large at Clarkson Potter. He graduated first in his class at the Culinary Institute of America and has written for numerous publications. Lam lives with his family in New York City.
French Onion and Blue Cheese Tart
Orange and Almond Cake
Saffron, Date, and Almond Rice
Zucchini Pancakes with Guacamole