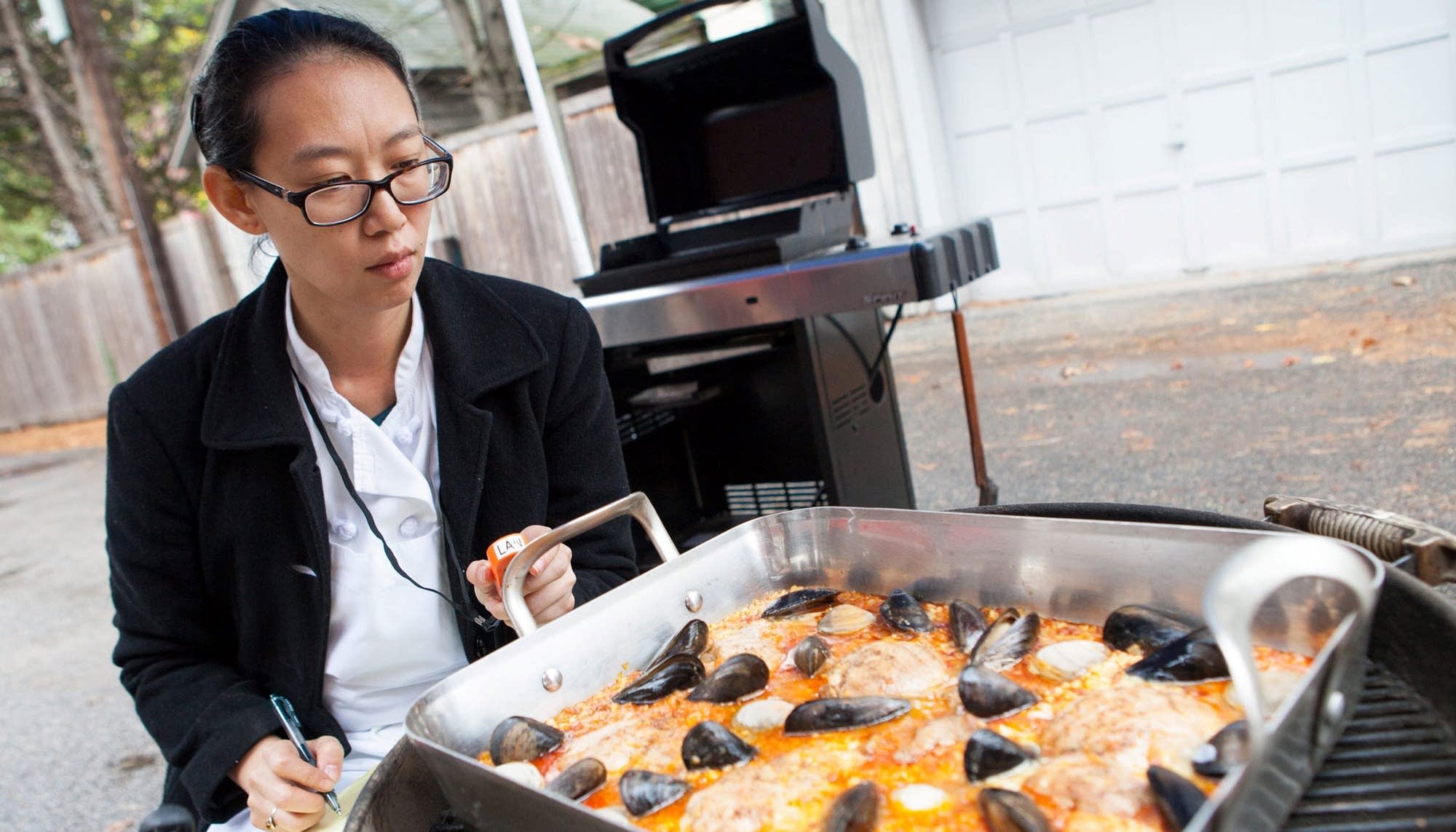 Above: Lan Lam takes notes during one of her recipe tests for paella on the grill.

We've always been a little obsessed with paella. Traditionally, in Spain, the richly flavored rice dish is cooked in a large pan over an open fire, a process that requires skill and good timing. However, we discovered an easier way to make the dish at home thanks to Lan Lam, senior editor and recipe developer for Cook's Illustrated and America’s Test Kitchen. She gave Managing Producer Sally Swift advice on mastering paella on a backyard grill including helpful workarounds to make the dish come together fairly quickly. Now you can make your own Paella on the Grill!

Sally Swift: We have been talking culinary projects this hour. One of my dream projects has always been paella. I suspect you can help me with that.

Lan Lam: I would love to help you with that. Paella is fantastic, but there are a couple of tricky bits you have to overcome. A traditional paella is cooked outside over a fire, so if you want to cook paella outside on a grill, making sure that you have the right setup is important.

SS: What do you think a perfect paella is?

LL: What I expect to see in paella is distinct grains of flavorful rice, nicely cooked proteins, maybe a bit of greenery, and most importantly a nice crispy crust on the bottom of the pan.

SS: They call it socarrat?

LL: Yes. The socarrat adds a crunchy texture to the dish.

SS: Paella is traditionally cooked outside?

LL: Yes. It was a created by farmhands who would gather up brushwood, grapevine bits, and whatever else was available to build the fire. And then they would gather up whatever edibles were around: rabbits, snails, chicken, beans. Those ingredients would go into the pan along with the rice.

SS: What a lunch! What were the challenges for you? What are the things that you had to think about when redoing the recipe for the home cook?

SS: Nor use snails probably.

LL: True! The things I was looking at included the best setup for the fire so that you're not constantly adjusting it. What do you cook it in? Especially if you don't want to purchase a paella pan. How to cook the proteins; they're very different and cook at different rates. How do you prepare them? When do you add them? And then finally: How do you get tender, chewy, flavorful rice with a crisp crust?

SS: Exactly. Those are all the reasons I have not taken this on. What were your shortcuts? How did you figure this out?

LL: I started with the pan. A paella pan is perfect for creating that crust of rice because it's very broad and there’s a lot of surface area for crisping. I looked around the kitchen and realized that a roasting pan – a large roasting pan that you would cook a turkey in – would be perfect. It's nice and broad, still fits in your grill, and you don't have to go out and buy anything.

SS: That is really good to know. I have no excuses now.

LL: That's right. Secondly, we had to figure out what sort of fire setup to use. If you're on a gas grill, you can just turn it on, and as you're cooking you lower the heat gradually to mimic the fire dying down. But on charcoal, where the fire will die down naturally, the problem was making sure that it was hot enough at the beginning and it would last long enough. The solution is simple. You will light your charcoal starter, then when it's ready, dump it in the grill, and add some unlit briquettes to the top. That's just enough to keep the fire going and cook your paella.

SS: You never have to restoke it?

SS: That's excellent. Then how do you deal with cooking all the different proteins – the chicken, sausage and seafood?

LL: I found that grilling the chicken first gets it going, which is great because it shortens the cooking time in the pan, but it also infuses that chicken with a nice bit of smokiness that spreads out into the rice as it cooks. As for everything else, it was just about adding them at the right time in the right place. Add the shrimp after the rice is partially cooked. With the clams you have to make sure that they go in hinge-side down so that when they open up, their liquor drains into the rice and flavors it.

SS: I never would've thought of that. What kind of liquid are you adding to the rice?

LL: The liquid is really important; the rice absorbs it and it flavors the rice. I found that when I added all the liquids outside of the pan, it would take too long for them to heat up, and for the rice to cook through. But, if you take all those ingredients and combine them into one broth inside the pan and bring it up to a simmer, it shortens the process.

SS: So, you heat up your liquid like you would do a risotto, right? You would have that liquid heated on the back burner. What have you enriched that liquid with?

LL: I used a combination of tomato paste, chicken broth, clam juice, and sherry, and then a little bit of garlic, paprika, and a saffron threads – if you like, saffron.

SS: You're heating up the liquid inside, then taking outside to the grill and adding it to the pan with the rice. Do you add anything else?

LL: Yes, there's one last component. It's the sofrito; traditionally that's peppers, onions, and maybe some tomato. I found that cooking them outside took way too long. To speed up the cooking process, I ended up using tomato paste and roasted red peppers instead.

SS: What is the trick to getting the rice to be tender, and still getting that beautiful crust on the bottom?

LL: The traditional rice used in paella is called bomba, and it's good at absorbing all the liquid without turning mushy. I found that Arborio rice is a good substitute; it will cook up into distinct grains that aren't starchy and mushy. In order to get that socarrat, make sure there's enough oil in the pan to start, so that at the end of cooking – once all that moisture is driven off and the pan starts to dry out – you’ll hear this popping, sizzling sound come from your grill. That’s a sign that the bottom is starting to fry and that crust is starting to develop.

SS: That sounds so exciting. How long does this whole process take?

LL: It’s going to be a little under two hours. Not too long.

SS: And it's all hands-off. Once you get it on the grill, you just trust it.

LL: It is mostly hands-off. What's nice is you never have to take anything out. You're just adding things to the grill, and it's fantastic.

SS: It's a beautiful idea, Lan. Thank you so much. I'm taking it on!

LL: Awesome. I'd love to hear how you did.

If you have your own paella suggestions or tips for Sally Swift and The Splendid Table team, leave them in the comments section below.