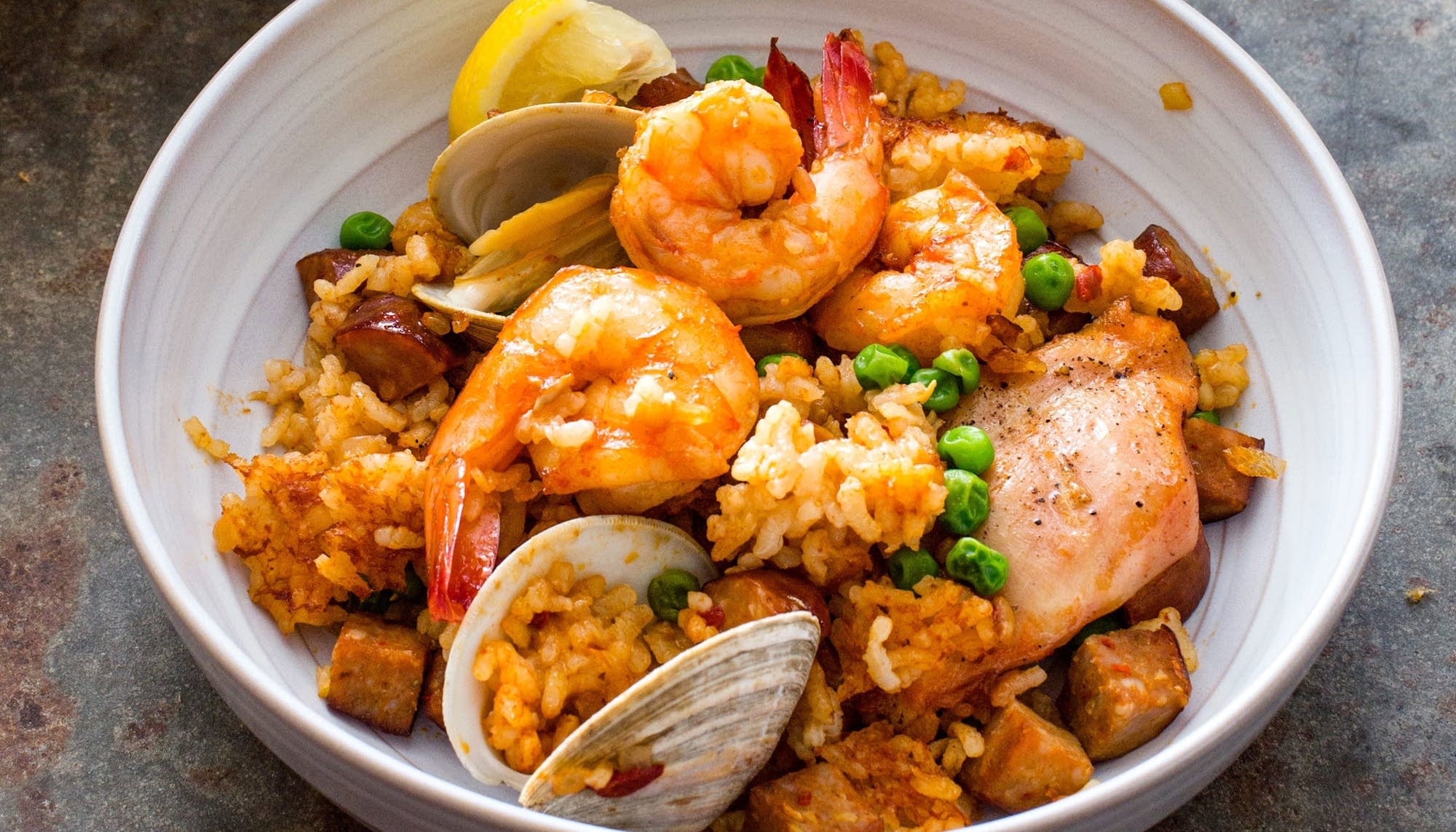 Paella on the Grill

Grilling paella lends the dish subtle smoke and a particularly caramelized crust and makes it a great dish for summer entertaining. In place of a traditional paella pan, we cooked ours in a large, sturdy roasting pan that maximized the amount of socarrat, the prized caramelized rice crust that forms on the bottom of the pan. Building a large (7-quart) fire and fueling it with fresh coals (which ignited during cooking) ensured that the heat output would last throughout cooking, but we also shortened the outdoor cooking time by using roasted red peppers and tomato paste (instead of fresh peppers and tomatoes), making an infused broth with the seasonings, and grilling (rather than searing) the chicken thighs. To ensure that the various components finished cooking at the same time, we staggered the addition of the proteins—first the chicken thighs, followed by the chorizo, shrimp, and clams. We also deliberately placed the chicken on the perimeter of the pan, where it would finish cooking gently after grilling, and the sausage and seafood in the center, where they were partially submerged in the liquid so that they cooked through; once the liquid reduced, the steam kept them warm

This recipe can be made in any heavy roasting pan that measures at least 14 by 11 inches. If your roasting pan is dark in color, the cooking times will be on the lower end of the ranges given. You can also use a 15- to 17-inch paella pan.

[Ed. note: Listen to Cook's Illustrated senior editor Lan Lam talk more about the process for making paella on the grill in an inteview with Sally Swift.]

2. Heat 1 tablespoon oil in medium saucepan over medium heat until shimmering. Add remaining garlic and cook, stirring constantly, until garlic sticks to bottom of saucepan and begins to brown, about 1 minute. Add tomato paste and remaining 1 1/2 teaspoons paprika and continue to cook, stirring constantly, until dark brown bits form on bottom of saucepan, about 1 minute. Add broth, clam juice, sherry, and saffron, if using. Increase heat to high and bring to boil. Remove saucepan from heat and set aside.

3B. For a gas grill: Turn all burners to high, cover, and heat grill until hot, about 15 minutes. Leave all burners on high.

6. Arrange chicken around perimeter of pan. Pour broth mixture and any accumulated juices from chicken over rice. Smooth rice into even layer, making sure nothing sticks to sides of pan and no rice rests atop chicken. When liquid reaches gentle simmer, place shrimp in center of pan in single layer. Arrange clams in center of pan, evenly distributing with shrimp and pushing hinge sides of clams into rice slightly so they stand up. Distribute chorizo evenly over surface of rice. Cook (covered if using gas), moving and rotating pan to maintain gentle simmer across entire surface of pan, until rice is almost cooked through, 12 to 18 minutes. (If using gas, heat can also be adjusted to maintain simmer.)

7. Sprinkle peas evenly over paella, cover grill, and cook until liquid is fully absorbed and rice on bottom of pan sizzles, 5 to 8 minutes. Continue to cook, uncovered, checking bottom of pan frequently with metal spoon, until uniform golden-brown crust forms, 8 to 15 minutes longer. (Rotate and slide pan around grill as necessary to ensure even crust formation.) Remove pan from grill, cover with aluminum foil, and let stand for 10 minutes. Serve with lemon wedges.