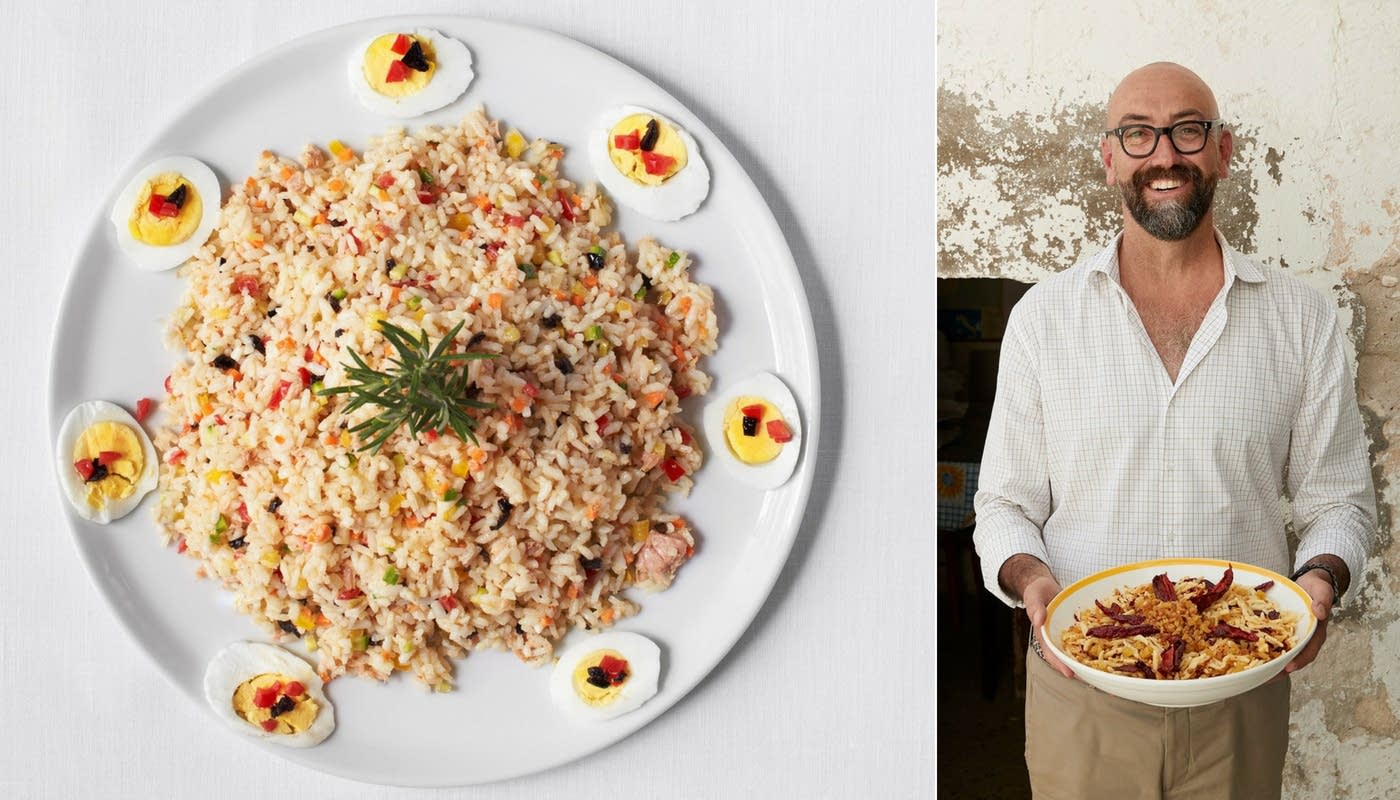 Rice salad. As curious as the dish sounds, it may also sound rather bland - which couldn't be further from the truth. After you hear the concept explained by a masterful cook like Rolando Beramendi, we guarantee you’ll be on board; he’ll have you searching for Carnaroli rice - the dish’s essential ingredient – and chopping fresh vegetables to fine bits in no time. Beramendi is an Italian food importer and author of Autentico: Cooking Italian, The Authentic Way. He talked with contributor Russ Parsons about the special relationship Italians have to rice salad and how it's best made. Beramendi shared with us his recipe for The Contessa’s Rice Salad (shown in photo above).

Russ Parsons: Rolando, let’s begin by talking about where rice salads usually fit in a meal.

Rolando Beramendi: They tend to be somewhat of a main and only course during the hot summer lunch. However, you also see it many times during the summer months being served as a primo, so as a first course instead of pasta. It’s nice because you can make it during the day and then let it sit and get all the flavors amalgamated into it. Then you don't have to boil pasta during a hot summer night.  Most often, they tend to take the place of primo first course in an Italian meal.

RP: What kind of rice do you use and how do you cook it?

RB: I do it exactly the same way as you would do spaghetti. I think the most important pot that I have – and the most important instrument that I have in my kitchen besides my knife – is a pasta pot with an insert. It’s the one that you can throw the pasta in and it has the colander built in so you can lift it up and drain it into the sauce. Well, I do the same thing with Carnaroli rice, which is the most valued and most precious grain that we grow in Italy because it's the longest and it has the largest amount of starch inside. It's very toothsome and remains al dente for a long time. Basically, I put a lot of water with salt and then I toss in a cup of rice – or two, if I want some for the rest of the week – and cook it like pasta. Check every now and then to taste when it's al dente. Then you lift the colander right away and bring it to the sink to shock it with running cold water, and then spread it in a big cookie sheet or in a baking dish. Drizzle a little bit of olive oil, and with your fingers spread the rice out to cool it off. Think of it as if you were using that rice as a spaghetti. You can come up with different sauces and variations, but you use that rice as if you were dressing it as pasta.

RP: Carnaroli rice can be a little bit difficult to find sometimes. Could you use arborio, or would it be better to go with long-grain?

RB: You'll be surprised how widely available Carnaroli has become right now; there are many different brands available. You can also find an online. Arbario is also a long-grain rice from the same area as Carnaroli, but I find it that it doesn't stay al dente as long as Carnaroli, which has a much stronger bite. For rice salad it’ll be worth seeking because it's an incredible grain.

RP: We’ve got the rice cooked and we've done the initial cooling on it. Now we have this blank canvas. What kind of ingredients do you add to a rice salad?

RB: The recipe that I chose to include in Autentico was The Contessa's Rice Salad. Contessa Rossetta Clara Cavalli d’Olivola was the woman who I work with in Piemonte in Torino. She told me that, in the 1960s, she was the first one to start making these little rice salads with everything sort of chopped in the same way. Can you imagine the labor to take vegetables and different types of ingredients, and chop them up to the size of the rice? It becomes these colorful specks of different vegetables in the rice salad. It was served with hard-boiled eggs and even broken tuna. The most important thing is that you try to chop everything as finely as possible. That way every bite that you take of the salad it will be a little bit different, and not everything becomes homogeneous.

RB: My way of cooking and my way of thinking is always to make things in a perfect proportion. So, it should be one-third rice, one-third another ingredient, and one-third another ingredient. For example, my favorite rice salad is to make it with shrimp and zucchini, and dressed with really good extra virgin olive oil and a splash of some acid, maybe lemon and the lemon zest as well. I'm a firm believer that less is more in many cases. With a summer salad, the simpler the better so that the rice is the star of the dish.

RP: You mentioned dressing it with olive oil and lemon juice. But, with The Contessa's Rice Salad she uses a mayonnaise base for it. How do you decide what dressing combinations you might use?

RB: I always talk about options and substitutions. I’m trying to pass around the word quanto basta, which is basically this principle from Pellegrino Artusi in L’Arte di Mangiar Bene, a book that has been in print for 170 years in Italy. He uses in many of his recipes, as I have as well throughout Autentico, q.b. – quanto basta – meaning “as much as is enough,” “as much as is needed,” or “as much as you like.”

I think that we need to encourage people to not be afraid to create their own interpretations. If you like one thing more than another, then do it. If you want to put more olive oil, go for it. I drench everything with good extra virgin olive oil because I love it so much. If you want to use one type of vinegar or if you want to use another type of vinegar, if that's the only one you have in your pantry, then go for it. The most important thing is to taste as you add things. Put the rice in a bowl and then start adding things. It’s not half-cup of this and half-cup of that. I always mix the rice salad with my hands. Start adding a little bit of things at a time. Be creative, as long as you keep tasting and add as much as is enough.

RP: That's a very generous description. But, this is an Italian dish. So, I'm sure there are things that must never absolutely under any circumstances be done with a rice salad. Anything come to mind?

RB: Maybe put ketchup or balsamic vinegar on it? [both laugh] That's the beauty about our country; Italy is so amazing. The Contessa might make it one way, but the next-door neighbor makes it another way. What I love about Italy is that there's no right or wrong – you just do it. For the most part we wouldn't use disparate ingredients, such as ingredients that are very wintered, like truffles or porcini mushrooms, in the summertime; we would save those for the winter and use them in risotto instead. I think seasonality is a very important aspect to a rice salad. The fresher and the simpler – the better.