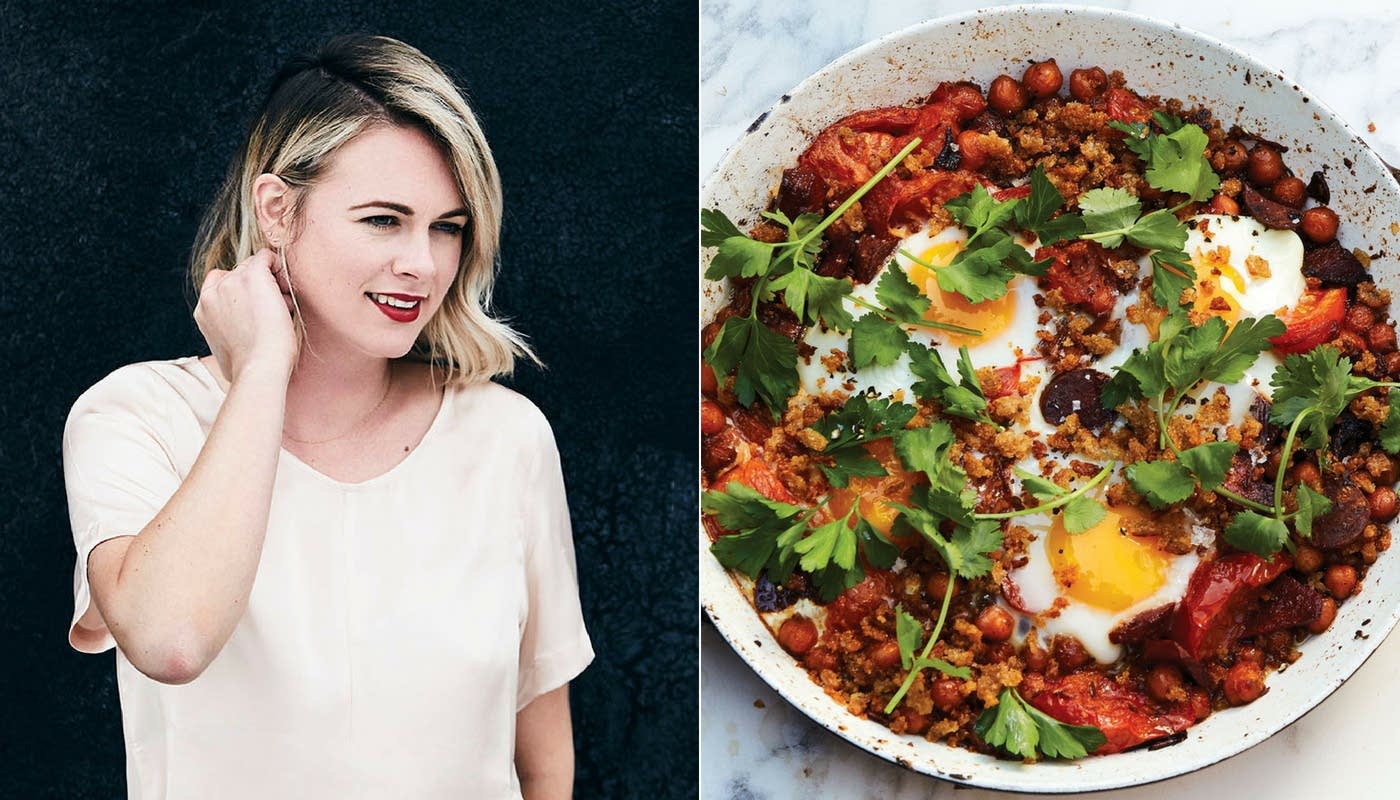 Let’s be honest, not all of us are breakfast people. On one end of the spectrum you have dull, bland cereals or oatmeal. On the other end you have sweet pastries, fruit or juices. No, thanks! Maybe our breakfast needs some influence from lunch and dinner. Alison Roman is a cook, writer and the author of Dining In, a book in which she promotes the idea of making more savory breakfasts. She talks with contributor Shauna Sever about the steps to this more satisfying breakfast experience. To get started, try Roman’s recipe for Baked Eggs with Crushed Chickpeas, Chorizo and Bread Crumbs (shown in photo above). You can also enjoy more of her recipes and cooking videos at her website.

Shauna Sever: One of the chapters that grabbed my eye is the one on savory breakfast. It's really a unique collection of recipes; it's not breakfast, it's not brunch. Can you describe it for us?

Alison Roman: Well, I didn't want to just call it breakfast. When I think of breakfast, I think of two eggs, a side of bacon, toast, maybe some hash browns. I wanted to draw attention to that world of savory porridges and the skillet hashes that are not a shakshuka, and introduce people to different ways to start their day. There's even a salad in there. I think the way that people eat now, especially first thing in the morning, is changing a lot. When I eat at home, savory granola is a big part of it. Eggs, of course, but what I do with those eggs. I make savory porridge with Parmesan and soy and scallion; I want that really hearty, homey, savory-ness first thing. I've just never been a sweet breakfast person at all. I wanted this to be very personal.

AR: When people hear that you're putting soy sauce in something, they think that it must feel Asian-inspired. Or with parmesan, does it feel Mediterranean or Italian? What I'm really getting at is you don't need a ton of ingredients, you just need intensely flavored ones. The one recipe is basically cheddar, kimchee and eggs. Within those three ingredients you get something really special and amazing that you wouldn't otherwise, because cheddar and kimchi on their own are already so powerful.

Same thing with something like Parmesan and soy. You're using them as a seasoning agent to introduce a little bit more flavor – rather than just salt – into your breakfast. I know that eating something like a bowl of chickpeas with chorizo for breakfast can be a little intense, but sometimes it’s exactly what you need. While it's not a revolutionary flavor combination necessarily, to think of something like that for breakfast is definitely interesting.

SS: It's so satiating and nourishing. I was really impressed by the fact that you do some produce-heavy meals in this section, which we don't usually think about first thing in the morning. You have this great callout about the “morning after” breakfast salad, which is really more of a concept than a recipe. How do we do it?

AR: It can be anything you want it to be, which is the beauty of the morning after breakfast salad. This recipe was something I first made while I was visiting one of my best friends in Maine. Of course, we had bought too many crabs and lobsters the day before because we were so excited to eat them all. We were looking at the bounty and thinking, “Okay, there's literally no way we are going to finish all of these.” So, the next morning I put all the leftover lobster into a salad with these beautiful lettuces that we had gotten from a little farm down the road. It was very idyllic. I don't live my life that way all the time and I don't expect anyone else to, but in this moment it was really special. And of course, with all those lobsters and crabs we had the night before, there was a lot of wine, and so we were feeling a little hungover. The idea of using up our leftovers, A, but also B, eating a bowl of lemony, herby, leafy greens, just made us feel amazing afterwards. I think that we think of a hangover breakfast, or a savory breakfast in that capacity, as something really fatty with cheese, sausage, eggs and lots of hot sauce, but for me, what I want, to kind of correct and reverse the damages, is oftentimes a bowl of nice greens with lemon, olive oil and salt. It kind of resets the system.

AR: Exactly. Then that sort of evolved because I realized any time I go out, if I have leftovers – which I try to bring home – or if I'm cooking at home and I have leftovers – especially from a larger kind of meat like pork chops – using up any roasted vegetable along with that leftover meat in a salad is also awesome. You don't have to heat anything up, just clean the fridge out a little bit. You have a half of a fennel bulb, throw it in there. You have two rogue radishes rolling around in your crisper? Slice those up and put it in there too. It's a free-form, choose your own adventure salad.

SS: Before everyone starts thinking that this chapter is too virtuous to be fun, you also have eggs cooked in chicken fat, which is totally meta as far as breakfast goes.

AR: It was an accident, really. I had leftover chicken fat and kept thinking of ways that I could use it up because I didn't want it to go bad. It was this delicious, highly seasoned chicken fat. And I was like, “Is it wrong to fry an egg in this?” I did some deep diving and thought a lot about it. I dug deep internally, did some soul-searching, and asked myself, “Is this unethical in any way?” I never answered that question, but it is delicious. Truly excellent.

Shauna Sever is the author of the cookbooks, Marshmallow Madness!, Pure Vanilla and Real Sweet. Her latest book is Midwest Made. She is also the voice behind the baking blog Piece of Cake. She's appeared on The Today Show, Food Network, Home and Family, Serious Eats, Chow and Ulive.com. Her writing and recipes have been featured in O, The Oprah Magazine, Food and Wine, Bon Appetit, Fine Cooking, Family Circle and USA Weekend.
Anzac Caramel  Chocolate Slices
Supe Me Domate
Lisa Donovan's Pie Dough
Kunafah bil-Jebn (Lebanese Sweet Cheese "Pie")