Anthony Bourdain remembered in his own words 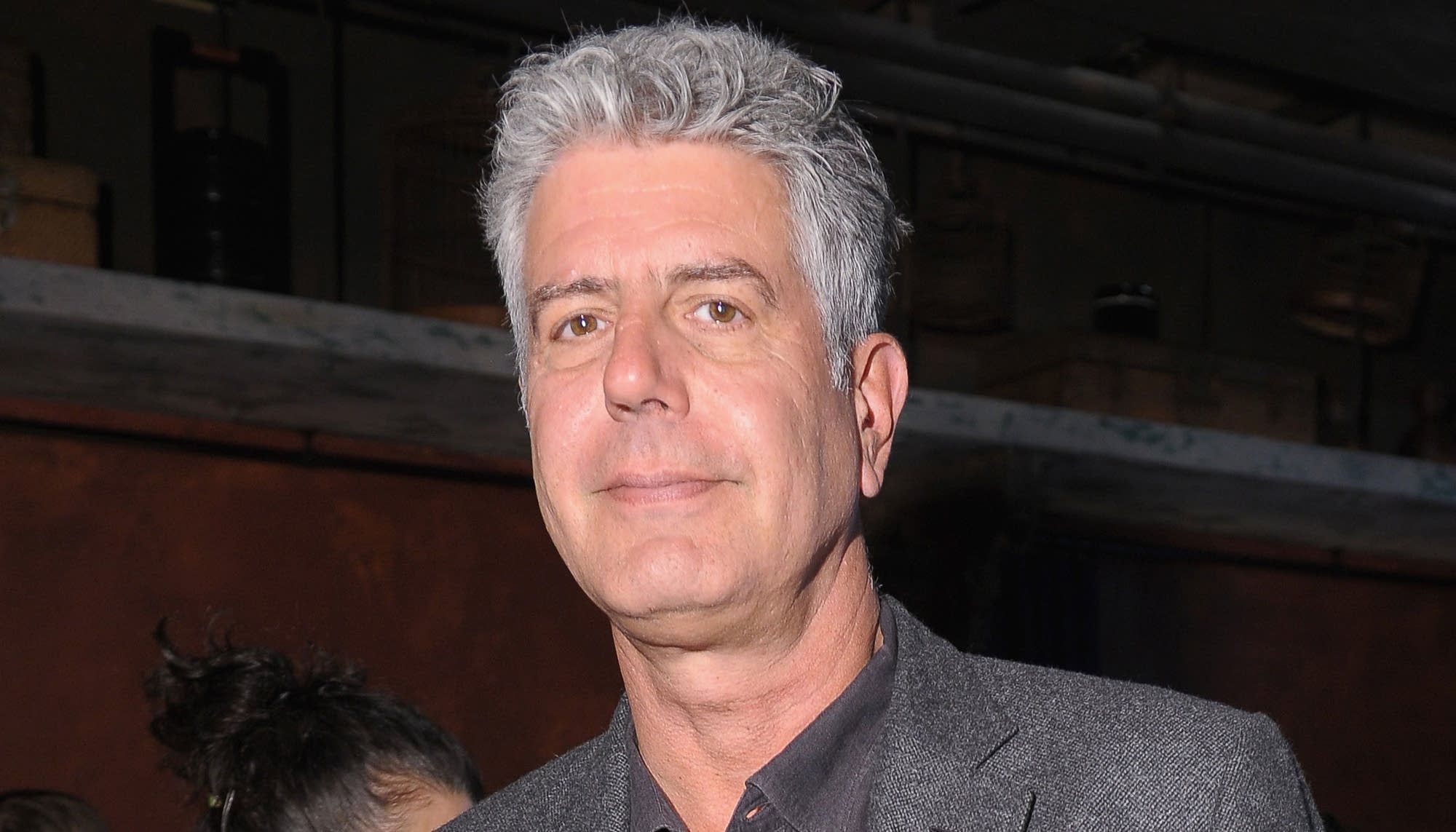 The Splendid Table was saddened to learn this morning that Anthony Bourdain, a dear friend of the show and an inspiration to adventurous food lovers around the world, had passed away. It’s no secret that Tony was one of retired host Lynne Rossetto Kasper’s favorite guests; she welcomed a conversation with him any time schedules aligned. They chatted multiple times over the years, tracing Tony’s progression from bad boy chef to author to television star. They discussed his endless travels to find the world’s most unique foods and compelling stories, as well as how nice it is to come home and cook a simple – or not so simple – meal for his family. We’ve gathered some of our favorite moments from Lynne and Tony’s interviews.

In 1999, Lynne and The Splendid Table invited Anthony Bourdain to read an excerpt from an article he'd recently had published in The New Yorker called "Don't Eat Before Reading This." In the piece, Bourdain pulls back the curtain to reveal some of the not-so-pleasant realities of restaurant kitchens. Hear Anthony reading an excerpt here.

In 2000, Bourdain published his groundbreaking book, Kitchen Confidential. The next year, in 2001, Lynne talked with Tony about his second book, A Cook’s Tour: In Search of the Perfect Meal, and about how his first show, a series on The Food Network by the same name, came to exist – even after his jabs at the network. Listen to the full interview: Anthony Bourdain’s off-the-road adventures in search for the perfect meal.

Lynne Rossetto Kasper: You open the book, by describing your hotel room in a town in Cambodia. There are bloody footprints on the wall and you describe the place as a dung hole. The whole experience sounds like the deepest level of hell. Why?

Anthony Bourdain: I grew up reading adventure stories as a kid. I thought never in a million years will I have the opportunity to see Vietnam or Cambodia or do this Joseph Conrad, Apocalypse-Now thing. This was my opportunity. On my way to finding the perfect meal I was looking for some off-the-road adventures.

I had a plan for Vietnam that I was going to re-enact the story arc of Apocalypse Now, a foolish, over-romantic notion perhaps, ending up by going up the river into the worst place on earth, the worst, most dangerous part of Cambodia. I'd heard that Khmer Rouge were in the casino business in a remote corner of Cambodia, so I thought, "Some sort of Maoist gambling paradise, they've got to have some good buffet up there. The food might be interesting, and I'll have some fun on the way." It wasn't exactly Siegfried and Roy, but it was also perhaps the most exciting time of my life.

Anthony later returned in 2010 to The Splendid Table to talk with Lynne about his ongoing efforts to expose the good and bad side of the food world with the book, Medium Raw: A Bloody Valentine to the World of Food and the People Who Cook. During their discussion, Lynne asked Tony about his place in the food world. Listen to the full interview: Anthony Bourdain: ‘Dishwashing saved my life’

LRK: At the beginning of the book, you're at a dinner with a bunch of very, very famous chefs. You observe that not one of those people would hire you. Then you ask the question: What are you doing there? How do you see yourself at this point in the world of food?

AB: For better or worse, I see myself as yet another over-privileged foodie with all the bad that implies. I found myself at a table with all of these great chefs taking part in the grand slam of rare meals on the basis of something other than cooking. There was a certain amount of discomfort with that, and also a sense of how absurd and yet wonderful it is that I would be so lucky as to find myself sitting there at a table with my heroes.

LRK: Do you see yourself as the person whose job it is to point out all the emperors are not wearing clothes?

Lynne also passed along a question from a fan via The Splendid Table’s Facebook page.

LRK: Jennifer asks, “What do you think you might have done with your life had you not become a chef?”

AB: I could tell you what I would like to have done, I mean if I could live my life over again. I would have preferred to have been Bootsy Collins of Parliament-Funkadelic – their bass player. I would like to be a bass player in a funk band. But that wasn't going to happen. What was likely had I not become a dishwasher and then a cook, to be perfectly honest, I'm sure I would have slipped into a life of petty criminality, imprisonment and death.

Dishwashing saved my life. It was the first time that I went home respecting myself, respecting others, with anything to feel proud of. Even now the business attracts certain personality types who sense in themselves a need for immediate gratification, quantifiable success or failure and a general discomfort with the regular 9-to-5 job.

Lynne’s last interview with Anthony Bourdain took place just before Thanksgiving 2016. Bourdain had recently released his wonderful cookbook Appetites; he described as a family cookbook, which Lynne thought was amusing for a book filled with duck fat, wild boars and a plethora of stocks. They talked about how Tony eats and cooks at home, and a bit about the controlled chaos of a Thanksgiving feast. This led to a more personal discussion about his relationship with cooking at home. Listen to full interviews: Anthony Bourdain makes school lunches, builds the perfect burger, and doesn't put ketchup on hot dogs and Thanksgiving preparation and people pleasing with Anthony Bourdain.

LRK: There is something you say that sort of stopped me for a moment. You say that you really hate to admit that there's more stress in cooking for a party of five at home than cranking out meals for 500 in a restaurant.

AB: I can crank out 500 turkey dinners standing on my head, but Thanksgiving with five family members and all of that backstory, or five anybody--I get nervous. I have my prep and my mise en place. I am squared away.

I think one of my problems is that even when I cook my daughter's school lunches and her dinners every night, I'm away a lot, so I mitigate my guilt at being away so much by over-parenting when I'm home. I have a cycle menu on my refrigerator, like Tuesday will be this for the school lunch, and if there are leftovers, I'll turn those into a sensible dinner. When I'm on vacation with my daughter, I'm always trying to assault her with the greatest hits of my childhood. I want to give her the best. I'm like the maniacal Jewish mother chasing after a child, "Eat, eat, eat! Don't you love me?"

We all knew Tony as a world traveler and master storyteller. He would spend months at a time globe-trotting for his TV shows and books. Lynne wanted to know, after returning home from many weeks on the road, what was his go-to food?

LRK: You've gotten off a plane. You've been filming nonstop. You come home, but you want to make yourself something to eat. What would it be?

If I'm cooking for myself, something comfortable -- I like making meatloaf. I like making cream of tomato soup that evokes the canned stuff that my mom would give me if I got bullied in school as a kid. Macaroni and cheese makes me happy. My daughter loves making ratatouille because she gets to cut vegetables with daddy and make him nervous.

In December 2017, Lynne played audio clips from her favorite Splendid Table interviews as part of her farewell show. In that collection she included an early 2000s interview she recorded with Tony Bourdain and chef Thomas Keller.