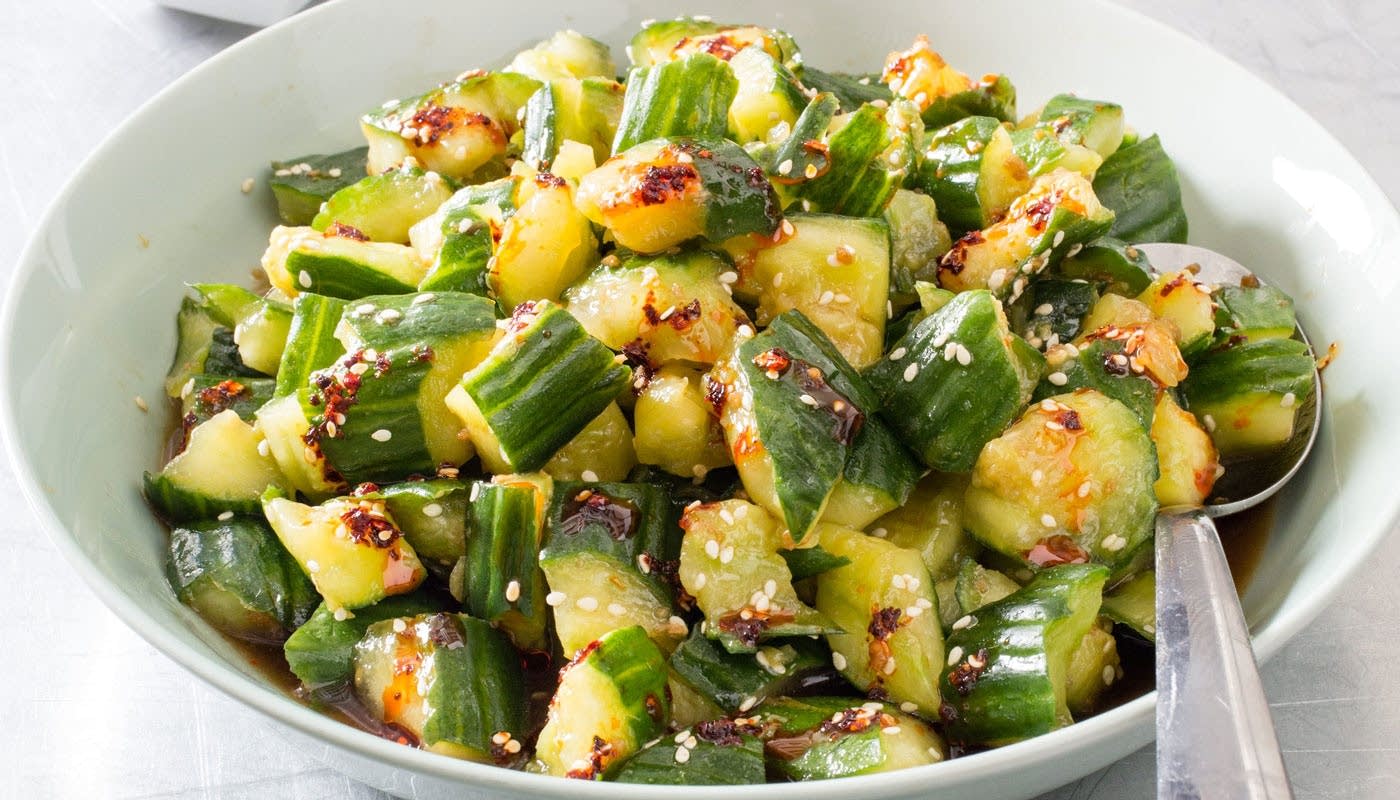 Sally Swift: I have been thinking about a food trend that I have been seeing more and more of. I think of it as “rough treating your produce.” We've been smashing potatoes before we roast them to get those ragged edges. We crush berries and let them sit. My grandmother used her take a whole tomato and rough grate it on a course grater to make a sauce instead of chopping it up. I am going to make a prediction that the salad of the summer is the smashed cucumber salad, and you’re here to tell us about it.

Elle Simone: I can honestly say that cooks across the country are far less stressed in their lives because they're getting to beat their food to death. [laughs]

SS: Tell us about this recipe. It's kind of crazy.

ES: It's called smashed cucumbers; it's also known as pai huang gua. It's delicious, simple, a great accessory to spicy foods, and it impresses people.

SS: So, why are we smashing these cucumbers?

ES: Smashing the cucumber serves two purposes. First, we're damaging the cell walls, and that makes the cucumber crisper. Also, it gives the cucumber more craggy edges that help hold the dressing better. But smashing it is not where it ends; we actually go in and break the cucumbers more with our hands. After that, a little salting happens. Now, if we were to slice these cucumbers it would get the water out; the salting process would just take more time. But because we're smashing them and damaging cell walls, the salt gets in there and dries out the water in almost half the time.

SS: That makes sense. What is the optimal technique for smashing?

ES: The optimal technique for smashing is putting the cucumbers in a Ziploc bag, taking a pan, and giving it a couple of good cracks. You don't want to smoosh it and have it become like soup. We’re not making gazpacho; we're making a salad, so you just want to break it up.

SS: More of a bonk than a smash. [laughs]

ES: Right. Much more of a bonk!

SS: This sounds like something that you'd have your six-year old help you out with. What kind of cucumbers work best?

ES: English cucumbers work best. First, because they have less water than American cucumbers and they are naturally a little bit more crunchy.

SS: And what are English Cucumbers? I'm not sure I could even tell you that. Are they the shiny ones or the seedless ones?

ES: They are not the shiny ones. You'll know the difference between English cucumbers because they're less waxy, and they're long and skinny. American cucumbers tend to be shorter and stubby.

SS: The cucumbers are smashed and waiting. What do we use for a dressing?

ES: We make a vinaigrette that has one of my favorite ingredients: Chinese black vinegar. It’s primarily made from rice aged in earthenware crocks to help develop its complex, rich flavor.

SS: That sounds delicious. Do we toss and serve this dish immediately?

ES: Indeed. Toss it, top it with a toasted sesame seeds, and serve it.

SS: I'm telling you, the salad of the summer!