Crafting new school cocktails at home, one bottle at a time

by Shauna Sever
Listen: Crafting new school cocktails at home, one bottle at a time
07:47 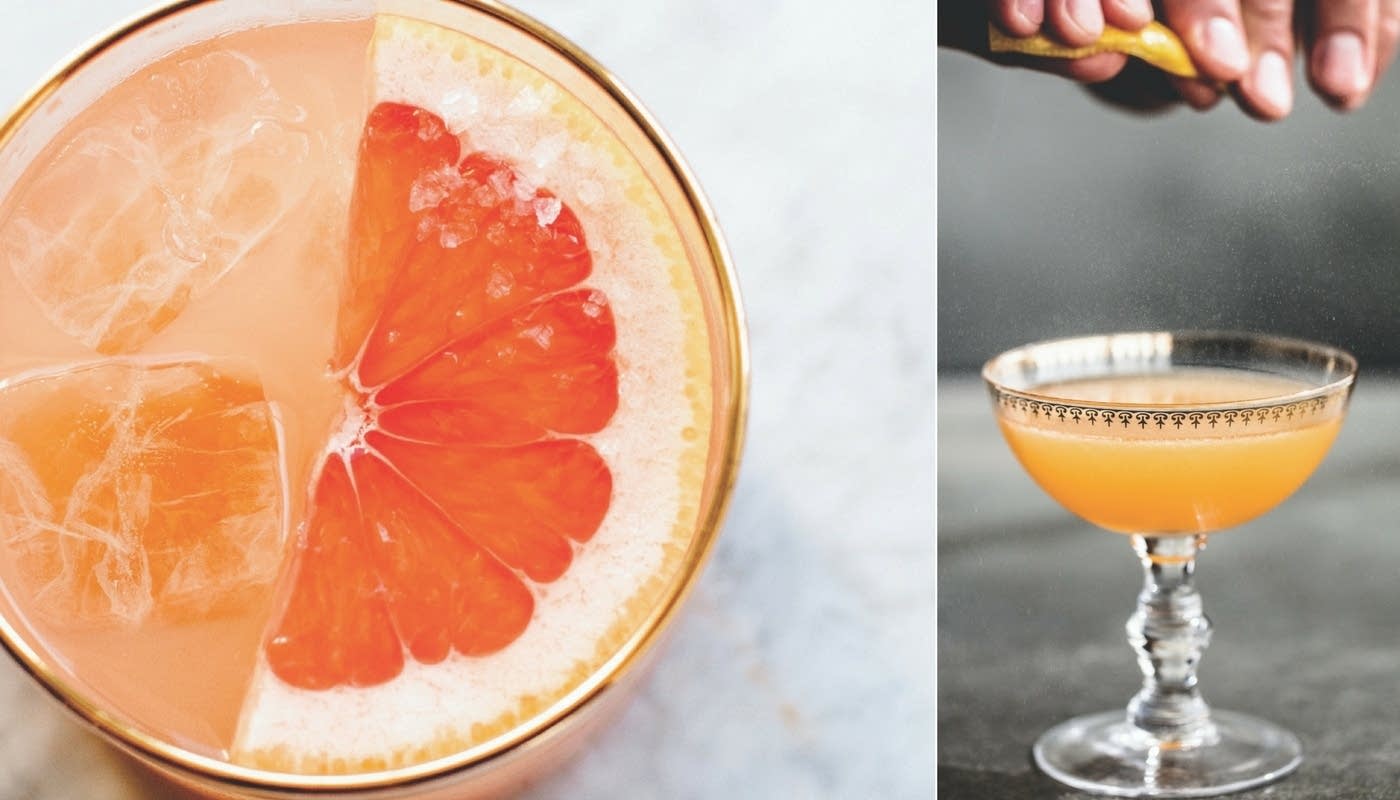 If there’s one thing that cocktail writer and drink expert Maggie Hoffman knows – and wants to impart on you – it’s that you don’t need to use every bottle in an expensively stocked liquor cabinet to make a crowd-pleasing cocktail. If fact, she’d argue that you only need one bottle of spirits and some creative culinary assistance from fruits, herbs and other ingredients you can pick up while at the market. Hoffman is the author of The One-Bottle Cocktail. She talked with contributor Shauna Sever and shows us the way to wonderfully easy and fun cocktails with recipes for Desert Sunset, Gin Rocket, and Slippery When Wet.

Shauna Sever: I love a craft cocktail at a beautiful bar. But I do consider myself a cheap date when it comes to stocking my own liquor cabinet at home, because it seems daunting and expensive. Which is why I fell in love with your book. Tell us about the idea behind The One-Bottle Cocktail.

Maggie Hoffman: I think you're right that when you go to a bar you're there for the whole show. And bartenders today are really excited about all the new things they can get. There's a bunch of cool importers bringing in historical and rare cocktail ingredients. There are bars specializing in a 100-year-old bottle of something or a rare vermouth from Spain. They can make you something so fantastic, then they can make it again for 100 more people. So, it's worth it for them to have those ingredients. But there's never been a time where what you can get in a bar has been further from what you want to make at home. Especially if you’re a person who loves to cook. You have enough going on making dinner and salad and baking beautiful pies; you need the cocktail situation to be a little bit easier.

You also don't want to test out a drink that costs $75 to make. If you buy a bottle of green chartreuse, it's going to run you $35. That vermouth is another $15. Plus your spirit. Pretty soon, a cocktail with only three ingredients costs $75 dollars.

The idea of this book is to take that expense out, which means you can have more fun and experiment. I sent bartenders to the grocery store, and I had them tie their hands behind their backs. They couldn't use their back bar. They couldn't use the crazy collection of liqueurs because every drink in this book has no vermouth, no bitters, no liqueurs. Just a single spirit. For you at your house, it means you can use that bottle of gin that you've never used for anything besides gin and tonic.

SS: This book almost feels like a cookbook rather than a cocktail book. There are a lot of ingredients that go into creating these cocktails that feel quite luxurious while using things we have at home or find in supermarkets

MH: Absolutely. And not only do they feel luxurious, but each of these drinks feels as complex as something you might get in a restaurant or bar. I worked with about 70 bartenders to put these together. The secret was in thinking about how they could create the flavors – the savory flavors, the bitter flavors; essentially, all the flavors that can team up to make a balanced drink from a spirit, liqueur or bitters – using just the pantry and fresh ingredients you get at the grocery store. They used herbs like tarragon instead of using herbal liqueur. They use oolong tea and jasmine tea, and things that would be used with food such as marmalade and fig preserves. These ingredients can add complex flavor and even the bitterness really needed to balance a cocktail.

SS: But the main ingredient in all these cocktails is one spirit at a time, correct? The chapter breakdown is one spirit per chapter.

MH: Right. There are about 10 gin drinks in the gin chapter. One made with figs, another made with lemongrass, and one with cucumbers and rosewater. There is also one that uses coconut and rice milk. When you get to the back of the book there’s a section called Bonus Drinks, which has more gin drinks.

Each of these drinks is designed for a single spirit such as tequila, vodka, or bourbon. As the bartenders were sending these recipes to me they'd say, “This is a peculiar drink. You you might also try it with gin because tequila has an herbal character that isn't that different in some ways from gin. Maybe they're cousins.” Or they'd say, “This is a bourbon drink, but maybe try it with rum.” I tested all of the drinks again using different spirits, and the ones that really worked are listed in the back section. You can make the tangerine honey and turmeric drink with vodka, but it's also delicious with gin. So, you have six more gin drinks there at the end of the chapter.

SS: It sounds like you got quite a few enthusiastic responses from bartenders. I'm curious if there were any bartenders that rejected this idea of only using one spirit in a cocktail.

MH: Completely. I had a few angry messages saying, “These aren't cocktails.” The traditional definition of a cocktail is that you have your spirit, say it's rye whiskey. And you have a sweetener, which could be a sugar cube. And you have bitters. Sometimes you have a liqueur to sweeten it. But at the very least you're supposed to have this sweetener and bitters; so they said, “These aren't cocktails. I don't work this way.” But I want to welcome people to expand the definition of cocktails.

The clever thing that the bartenders in this book did is come up with different solutions. One of the drinks you shake with a few grapefruit peels or grapefruit twists. The oil from the outside of the grapefruit uses its bitterness to cut through the sweetness of the drink, so it's quite tart, bitter and refreshing. Another bartender made a syrup with radicchio, which blew my mind. Radicchio has this a sweet, vegetal flavor and also some bitterness. He added rosemary and grapefruit peel as well. You end up with something that's almost like the Italian liqueur cynar, which is very popular and delicious; I love it. But when you can't use that, you can do it yourself. Anyone who's comfortable in the kitchen – anyone who's comfortable making tea – can make these things to balance a drink in a new way.

SS: Some of the most creative ideas come out of not being able to use your typical crutches or the typical ingredients that you might normally go to as a cook, or in this case, as a bartender.

MH: Absolutely. I was at a dinner party recently, and a friend put me on the spot and asked me to make a drink for six people. I dug through her refrigerator and found grapefruits and hot sauce. I remembered a recipe in the book called the Passport to Chile that is meant to be a pisco drink. A pisco is a lovely brandy made in Chile and Peru that has a beautiful floral flavor. It's a simple drink with just grapefruit, honey, lime and a little bit of hot sauce, which brightens it up. And I knew that instead of pisco, you could also make it with tequila. So even though her liquor cabinet only had tequila, vodka, and cherries, I was able to make that drink for six people.

SS: That sounds amazing. And it's nice to have a cocktail book that is empowering and encourages you to play in a way that other cocktail books do not. Let me ask you this. Even if my home bar isn't very well-stocked, I usually have a bottle of vodka rattling around in the freezer. What kind of drink should I make this spring with the vodka that I already have?

MH: Lots of fun things. We still have really good citrus, and that's always fun. One of my favorites is from Sara Rosner, who is in Washington, D.C. She uses tangerine juice or mandarin orange juice and lemon together with turmeric and club soda; that with a little honey and vodka is delicious. If you have gin you can use that instead.

Another one that I love is a late take on the Bloody Mary from Matthew McKinley Campbell, who's in the Bay Area. He uses cherry tomatoes, which are pretty decent year-round. He puts them in the blender with fresh pineapple, adobo sauce from a can of chipotles, fresh cilantro, lime juice, agave, and a pinch of salt. You blend all these things together until they're smooth, then strain it, and you have this light, spicy, fruity, slightly savory, Bloody Mary mix. Take the liquid, put it in your fridge, and use it to mix it half and half with vodka. It's also good with reposado tequila. And what's fun about this is you don't throw away the solids after you've strained it; take the solids and put them in a bowl. What you have with that cilantro, pineapple, and cherry tomatoes is a really nice salsa, which you can serve on a side. So that pulls double duty.

Shauna Sever is the author of the cookbooks, Marshmallow Madness!, Pure Vanilla and Real Sweet. Her latest book is Midwest Made. She is also the voice behind the baking blog Piece of Cake. She's appeared on The Today Show, Food Network, Home and Family, Serious Eats, Chow and Ulive.com. Her writing and recipes have been featured in O, The Oprah Magazine, Food and Wine, Bon Appetit, Fine Cooking, Family Circle and USA Weekend.
Roasted Veggie Bowl with Green Goddess Dressing
Tinned Scallops and Kelp Pesto
Sheet Pan Chow Mein
Peanut Stew with Spinach and Miso