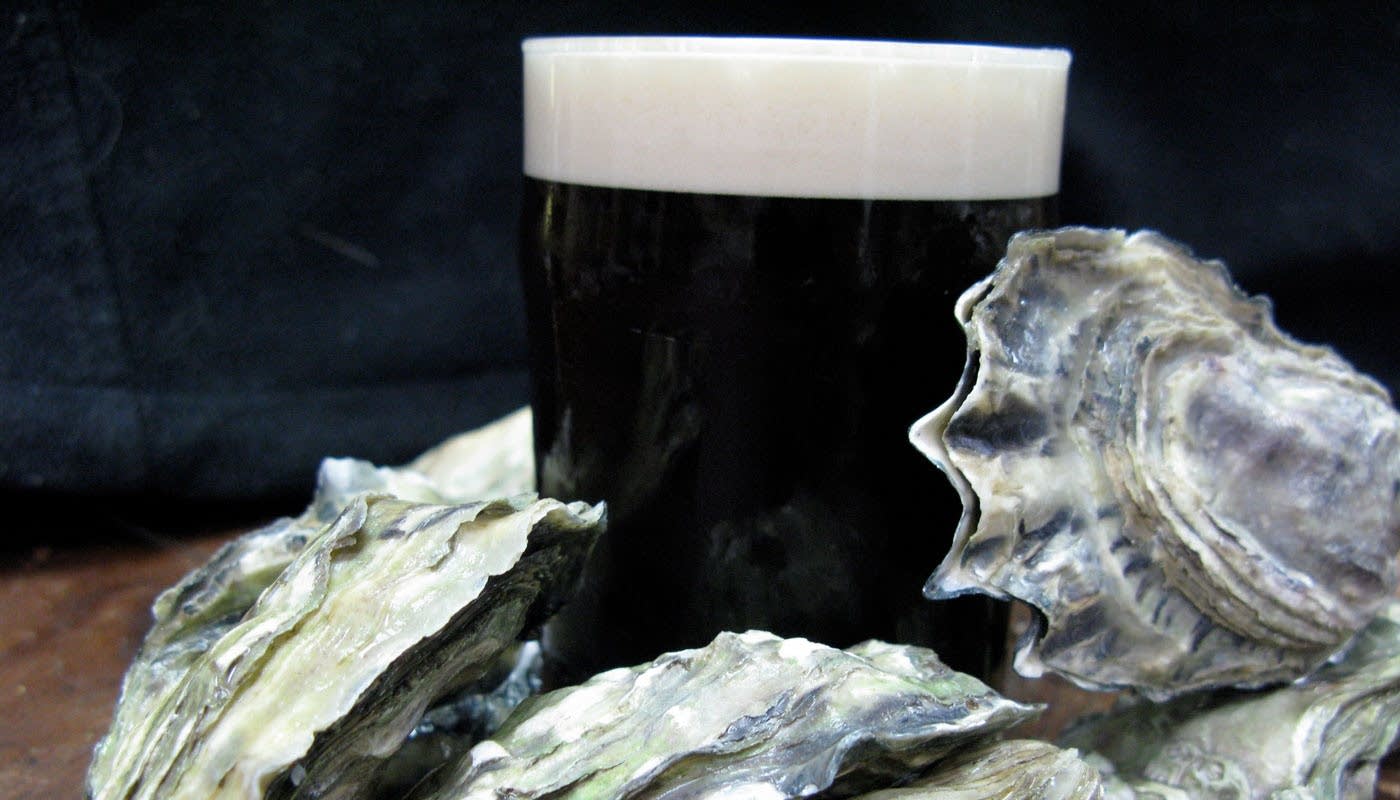 It’s no secret that beer and seafood make excellent companions. One classic pairing is oysters and dark beer such as stout or porter. It’s been that way since 1800s London when oysters were pulled right out of the River Thames, shucked, then slurped down with a majestic glass of dark beer. Just imagine a lovely platter of raw oysters on ice with lemon wedges sitting next to a tall pint glass of dark, rich stout. The bivalves’ briny and mineral-y flavors complementing the roasted, chocolate and coffee characteristics of the beer.

Now imagine those oysters actually brewed in the beer – meat, shells, brackish liquid and all. It’s called an oyster stout and it’s an increasingly popular beer substyle among American craft brewers and homebrewers. While some critics may see oyster stouts as just another gimmick beer in the already long list of recent gimmick beers, others appreciate the process for its unique use of local ingredients and the new set of flavors that oysters impart on the beer. With the flavors of oysters filling a wide spectrum including sweet, salty, earthy, creamy, herbaceous, melon and vegetal, it’s not hard to imagine the effect they would have on a beer.

There are several different ways oysters can be utilized in the brewing process. This can include all parts of the oyster: meat, shells and liquid. As far back as the 1800s, brewers in the United Kingdom used oyster shells in the boil kettle as an additional source of calcium and a fining agent to aid in clarification of the finished beer. Using the oyster meat itself is less historical and more of a modern twist. Homebrewer Joel Rea says the most important attribute the oysters give to the beer is the mineral influence. “Mineral contribution in beer is critical,” he said. “In this case the heavy calcium mellows the high notes of the roasted malts, similar to how cream will smooth out the sharpness of a cup of coffee. The brine of the animal also layers in a savory – almost umami – flavor.”

Rea is the owner of Corvallis Brewing Supply in Corvallis, Oregon. Not only does he brew his own McRea’s Sip o’ The Sea oyster stout regularly, he has also collaborated with three commercial breweries in the Pacific Northwest – Reach Break, Flat Tail and Agrarian Ales Brewing Companies – to brew pro-scaled variations of his recipe. While most brewers including oysters in the boil kettle only, Rea takes the unique approach of also mashing with whole oysters – or steeping them in the malt and water mixture as it’s held at about 150°F for an hour. The temperature here is hot enough to warm the oysters inside the closed shell, but not hot enough to pop the shells completely open. Once the mash is complete, the sugary liquid – called wort – is rinsed out of the grains and moved into a vessel to boil.

Before the transfer, however, Rea says this is magical moment at which to eat the oysters – if an oyster-loving brewer is so inclined – because the temperature of the mash has not turned the oysters completely tough and rubbery like they will be after the long boil that follows. “This presentation of the oyster will rock your world,” he says. “It’s like sous vide cooking. An hour at 155 degrees and the shells have relaxed, making them easy to shuck. The flavors are incredible as you get that gelatinous protein of lightly cooked meat mixed with the brine of the ocean, the sweetness of the maltose sugars, and the roastiness and smokiness of the specialty malts.  It is almost worth brewing this beer just for the presentation of the cooked oyster.”

Damian McConn, head brewer at Summit Brewing Company in Saint Paul, Minnesota, is a self-described “good Irish bloke with a deep affinity for porter and stouts.” For his brewery’s variation on the oyster stout, McConn opts to leave the shells out of the process and uses only the oyster meat and briny liquid, which is added to the kettle about 15 minutes before the boil in finished. Summit’s oyster stout was born out of collaboration between Summit Brewing and Chef Russell Klein, owner of the French bistro, Meritage in Saint Paul. For the past few years, Summit has partnered with Klein to brew an oyster stout that is served exclusively at Meritage’s annual Oysterfest in downtown Saint Paul. The autumn event hosts oyster farmers and purveyors from all three coasts – West, East and Gulf – and presents a wide range of raw oysters, educational sessions, special dishes, and of course, a wonderful oyster stout to wash it all down. The beer is a balanced style that pairs well with seafood thanks to nice bitter chocolate notes, slight roast/coffee character and a definite fruity element. “Washington oysters tend to be fairly clean, crisp and a tad fruitier that those from the East Coast,” he said. “That fruity element comes through in a subtle way in the final beer, and there’s a hint of brininess that blends well with the hop character and malty finish of a stout.

At Upright Brewing in Portland, Oregon, oysters never see the mash tun or the boil kettle. Instead, Upright head brewer Alex Ganum -- along with collaborator and co-brewer Jason McAdam from Burnside Brewing -- loads eight dozen large oysters in the brewery’s hopback, where the hot wort passes through them for roughly 30-40 minutes on its way to the fermenter. Think of this as a giant tea infuser filled with oysters. Ganum also adds eight gallons of what he calls “oyster juice” – essentially seawater that Hama Hama Company collects from their pre-shucked oysters – to the kettle to help achieve an intentionally high essence of salinity. “I've had a handful of oyster stouts that don't really seem distinguishable from a standard stout,” he said. “I think ours always has a noticeable salty flavor which is a key part of the experience. I think the best ones also typically have high residual sugar and lean on the heavy side.”

As wild and crazy as the concept of brewing a beer with oysters sounds, the brewers we spoke with all agree that the general consensus from beer drinkers is overwhelmingly positive – albeit cautious at first. “Some folks are surprised when we tell them the process and expect something outrageous tasting,” said Ganum, “but nearly everyone who enjoys stouts gives us solid feedback on it. It seems to do well in restaurants too; obviously there's a culinary connection there.”