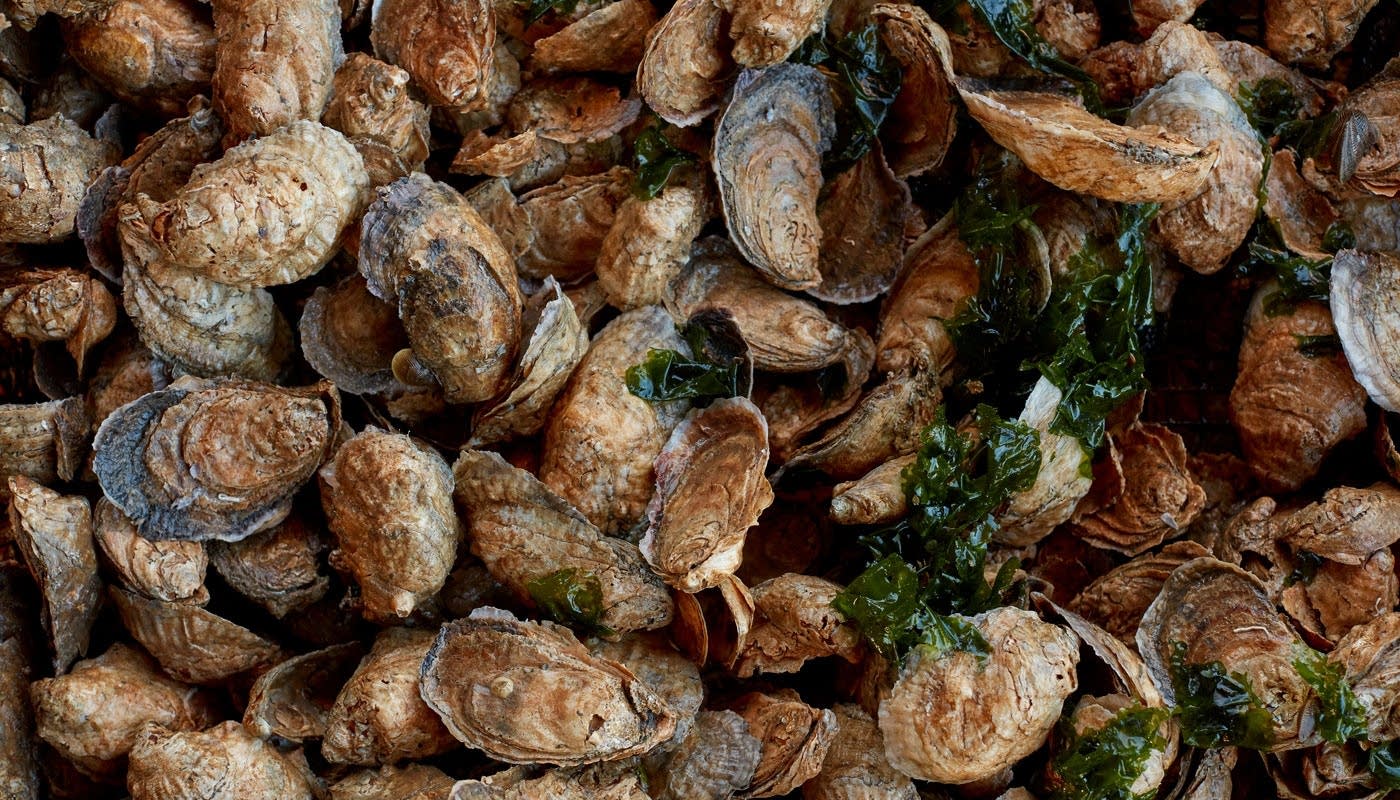 Ryan and Travis Croxton are cousins and fourth-generation oystermen in the Chesapeake Bay of Virginia, only they weren't meant to be. They inherited the family oyster business, but had no idea what they were doing. Through their research of oyster farming, they created a more sustainable way to farm oysters. The growing and harvesting techniques of their Rappahannock Oyster Company have reinvigorated the industry. Francis Lam talked to them about innovations and improvements in bivalve aquaculture.

Francis Lam: Ryan, when you guys first started out as oystermen, what was different about what you were doing than what your great-grandfather was doing 120 years ago?

Ryan Croxton: The main difference is that we literally did not know what we were doing. We got to start from a fresh perspective. I'll often equate this to the starting of our country, where you have to rewrite a constitution, re-evaluate what everybody else has done, and then do something fresh and new that incorporates the best practices of it all. We had a system of dredging, and so forth, that had been our legacy, that really hadn't worked for us. It basically left the bay at a point where we didn't have any oysters left, so we had to think of something new. It started with investigating and learning how to do something different.

FL: When you say the dredging and the legacy, meaning oysters were essentially way over-harvested by that point, by the time you started, you mean there weren't many oysters left in the water anymore?

RC: Right. It was a wild industry that had grown in the Chesapeake Bay and was historically done through dredging the bottom by these rakes that pulled up all sorts of bycatch, including oysters at various stages of growth. And then they would cull through it and throw everything back that they didn’t want. It was a really inefficient way to do it, and it also left the area where they were growing oysters much worse off than before. Essentially, you're depleting the number of oysters and not only not putting anything back, but not letting it rebound. So, we needed to completely rethink it.

Travis Croxton: We had the history of our family’s oyster leases but no equipment, no land, no boats, no property. We had to figure out: how is everyone else in the world growing oysters? And a lot of time we were Netscaping – not Googling or using AOL –  researching how to grow oysters, and we realized that every region in the world, except for the Chesapeake Bay and Gulf of Mexico had adopted aquaculture because they had to. They had decimated their oyster population centuries before. The Gulf and Chesapeake were so prolific and massive that it took centuries to decimate that population. Essentially, it's the Lorax story: mankind takes everything that it can from resources until there is no more. For us, the bay was one percent of its historic population and –

TC: Yes, it was a dead industry. That's why we thought that it would be a good time for us to jump into business. We thought that with aquaculture we could prove that we could grow oysters. For example, there were these retired oyster gardeners that were tying up oyster floats to their docks and having success growing the native Virginica species. And we said, "Why don't we take that on a commercial scale?" And we jumped in.

RC: That's an important and exciting part of this – that it was the native species. We weren't just figuring out how to grow oysters; we were figuring out how to restore our native population. At the time, when we started getting into this, in 2001, they were talking about putting a moratorium on the Eastern oyster – putting them on the endangered species list – and possibly even introducing a Chinese oyster to replace it. It was a scary time because it might have meant the end of our native species.

FL: But what is farming oysters? Most people think of oysters as the dredging you talked about. You'd go out, you'd find them, and just start digging. So, farming is putting oysters back into the water?

RC: Yes, there are a number of ways to do it. Aquaculture is thousands of years old. It’s about trying to grow product in the water. The difference is that now in the modern age, we're able to do it in a way where we actually add to the wild population.

For example, we'll take brood stock out of the water in February and warm the temperature of the water up so it tricks it into thinking it is summer when it would naturally spawn. We can create a next generation of oysters out-of-sync with nature that allows us to continually add oysters back to the process, which creates a sustainable industry versus one that has to continually depend on wild stock for seed the next year.

FL: That's so interesting. And oysters are awesome too because they clean the water they're in, right? They improve the ecology of the bay.

TC: Yes. Oysters are probably the best thing you can eat to improve the environment. Our friend Barton Seaver has often stated, “If you want to save the world, eat an oyster, a farmer's oyster.”

We say that our work isn't sustainable, it's restorative. For every oyster we sell to a restaurant, we're probably putting 12 oysters back into the water. Where we have three major oyster farms, the wild population around them is increasing because of all the larvae that we put back into the water. The subaquatic vegetation that had been dredged up is coming back, and that provides sanctuary for baby marine organisms, from baby rockfish, crabs, and we've even had seahorses on occasion. Everything comes in. It's a full cycle. Oysters are the building block of the Chesapeake Bay and most marine ecosystems.

RC: And there's no adding food to this, they're eating food that's ambient in the water. Unlike the cow conversion, where it's seven pounds of food to get a pound of beef, we're not adding any. We don't feed the animals at all, so it's the most energy efficient food source you'll find.

FL: And they taste good.

FL: We'll get to the flavor later, but when you guys started, like you said, you didn't know what you were doing. How did you learn to do it? You started in your living room, right?

TC: Yes. Well, some might say we still don't know what we're doing, especially our wives. But, yes, once we got in, we just soaked up everything that we could; it was all-consuming. We had full-time jobs at the time that we probably weren't good at because we were so focused on this other stuff night and day. We kept saying, why can't we do this or that? And then we found out that oyster seed at nurseries cost a lot, we had no money, and there were no financial backers for this. It was just us. We thought: why can't we just take river water and all the things that we need and set up larvae in a tank in Richmond in my house? It failed miserably, but one thing I'm proud of is that we kept on experimenting. We moved it out of our house and into water. We like to keep on innovating. Right now, we're working on some techniques that, we think, will take us forward into the next 20 years. We're always trying to increase our quality.

FL: OK, so now you're putting the oysters in the water, and famously, oysters taste like their environment. They taste like the water you put them in. And it sounds like there can be a real level of creativity to what you do, in terms of farming the oysters and playing with flavors, and maybe even textures? Can you talk about that?

TC: At its essence, we call it merroir. We ripped off the terroir terminology from the wine industry and applied it to oysters. Oysters take on the characteristics of the marine environment where they grow, whether that's types of strains of algae in the water, salinity, pulling some nutrients off the vegetation that's around, the minerality in the water – they take on those different characteristics. If you Google “oyster tins Chesapeake,” you will see that in the old days there were thousands of different appellations of oyster company names. Each stretch of all of the rivers had different nuances of flavors, and we had lost that. So, we tried to bring that back. Early on, we went to Grand Central and noticed that they had probably 20 oysters from a two-mile radius –

FL: That would be Grand Central Oyster Bar in New York?

TC: Exactly. They had 20 varieties from Massachusetts off the Cape, but they had one from the entire Chesapeake, and it was just called Chesapeake. So, we want to bring back the nomenclature from before.

RC: The merroir-effect is going to happen no matter where you grow an oyster; it's going to taste like that region. But then, as we evolve and as we get better, we start to realize that just like vintners, we start to control a lot of the process. You know what kind of exposure, you obviously pick your site, you put them at different levels in the water column, which will affect their access to food and oxygen, and you can affect which types of grasses they're going be near; you can plant different types of grasses. There are all sorts of different ways that you can start adding layers and nuances to the oysters that are your own.

FL: Ryan, it’s been almost 20 years since you started in 2001. How has the world of the Chesapeake oyster changed since then? The first documented records of people seeing the Chesapeake indicated that there were so many oysters, shells were piled up almost like mountains coming out of the water. But when you started, you said it was essentially all gone. What are you seeing now, 20 years later?

RC: Yes – that arc is so fascinating. Our peak was probably in the 1890s when we were doing 20 million bushels a year out of the Chesapeake Bay. In 2001, it was 21,000 bushels. Today, our company alone is doing twice as much as the entire bay did in 2001. Right now, the Chesapeake Bay is producing around 600,000 bushels a year, which is the largest amount on the East Coast. We've gone from zero to first in a pretty short period of time, and I don't see it slowing down any time soon – and we're still at such a fraction of the biomass that there's much more room to go.

RC: How often can you say that? To go out and eat more seafood? So much of what we tell people is about restraint, but with oysters, it really is one of those things where we can encourage gluttony.

FL: Cool, thank you so much for coming in.