Antibiotics and the future of Big Chicken

by Francis Lam
Listen: Antibiotics and the future of Big Chicken
12:30 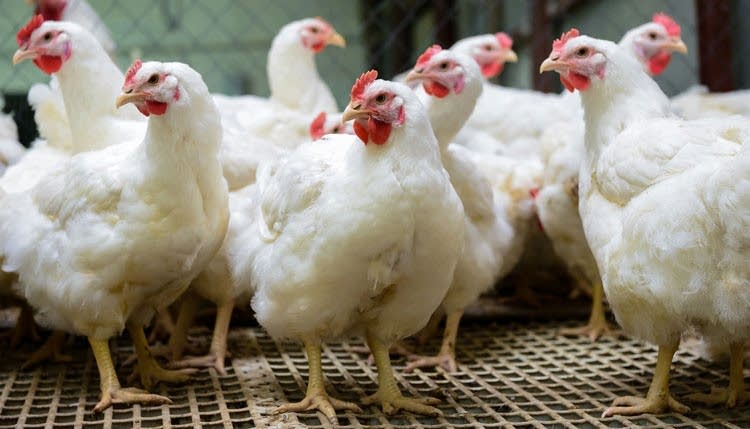 Maryn McKenna is a journalist who specializes in superbugs – bacteria that have evolved to survive antibiotics. Her book, Big Chicken, focuses on research involving the use of antibiotics in modern agriculture and how they changed the way the world eats. McKenna says the chicken industry is largely to blame for our enormous overuse of and exposure to antibiotics. But, as she shared with Francis Lam, as she followed the story of Big Chicken, she also found a real reason for hope.

Francis Lam: You have this idea that once raising chickens stopped being about growing animals and became more about growing meat, the industry basically became this laboratory of technological innovation. I love this story about how 50 or 60 years ago there was a contest to create what they were calling the “chicken of tomorrow.” What, in their minds, was the chicken of tomorrow?

While all that exercise and diet might have made them very rich-tasting; it would also have made them kind of scrawny and stringy. In order to get people to eat more chicken – which was the entire goal of this, to increase the demand for chicken, because industrialization was already increasing the supply of chicken – the USDA and the A&P supermarket chain held a contest, the goal of which was to physically remake the chicken. It aimed to hybridize chickens from the varieties of backyard chicken all over the country so that they would be, first, white-feathered, because that was more appealing to consumers; and docile, not running around a barnyard, but willing to sit in one place; but most of all, meaty. When they proposed the contest they talked about breasts you could slice like a steak, which not only sounds delicious, but also gives you a sense of what a chicken breast must have been like before this contest. The chicken of tomorrow marks the transition from chickens as a backyard thing, as heritage varieties that differ from town to town and ecosystem to ecosystem, to one consistent chicken all over the world – it looks the same, gains weight in the same manner, has the same temperament and body composition, and produces all that meat that is now the number one meat that we eat in America.

FL: To get to that point, where you have chicken as the number one meat, they had to make all these technological innovations to keep making the growing of chicken faster, more efficient and cheaper. Maybe the most important one you write about is that the chicken industry was the first industry to introduce antibiotics to the animals, which no one had done before. Why did they start doing that?

MM: There's an interesting nexus of a couple of a couple of different trends happening, and they all happen at the end of World War II. The first is that antibiotics come on the market. All of the antibiotics that we think of as starting the antibiotic era arrive between about 1944 and 1948. And they make an enormous social impact. They change the course of the war. They bring soldiers and sailors back that otherwise would have died on the battlefield. The war also marks a huge upsurge in the infrastructure of growing meat so that all those soldiers and sailors can be fed.

But when the war ends, that guaranteed market goes away, and the meat industry suddenly needs – in order to keep from collapsing – to cut its costs sharply. They start using much cheaper feed, and then they start looking for supplements that they can add to that cheap feed in order to make it more nutritious. This rogue scientist, Thomas Jukes, who is a specialist in the dietary needs of chickens and who happens to work for one of the companies that made one of these first antibiotics, gets the idea to try dosing chickens with tiny doses of antibiotic in their feed. When he conducts an experiment in 1948 to figure out if this is going to work, he gives a set of chickens all kinds of different supplements, and the ones that get the tiny doses of antibiotics grow faster than any of the others.

FL: Why do antibiotics make the chickens grow faster? They’re not growth hormones.

MM: Right. They're not hormones. Antibiotics are compounds made by bacteria to kill other bacteria. That's what they were originally before we took them into the lab and synthesized them and made them more perfect. We give antibiotics to animals in their feed and water, they're swallowed, they go into the guts, and then they affect the community of bacteria that exist in the guts of animals and every living thing in such a way that it changes their uptake of nutrition. It makes them put on tasty muscle mass faster than they otherwise would.

FL: Why is it a problem?

MM: It's a problem for a whole nested set of reasons. First, most antibiotics aren't being given to animals that are sick. In human medicine we take for granted that antibiotics exist in order to cure something, but most of the use in agriculture isn't to cure anything. It's for these other uses. The second reason is that as we start to give antibiotics to animals, it gives us kind of a new framework to think about the way we raise them that undermines animal welfare. That causes farms to be more concentrated and it changes the economics of farms – the balance between industry and labor. But the most important reason that we should be concerned about this is because when antibiotics are given to animals in that matter, it causes antibiotic-resistant bacteria to arise and flourish in their guts – in that collection of bacteria that lives in the guts of every animal and every other living thing including us. Those antibiotic-resistant bacteria then exit the animal, either on its meat when it gets disassembled at slaughter, or in its manure, which then goes into the farm environment in one way or another through various pathways. Those drug-resistant bacteria travel to humans and cause drug-resistant infections.

FL: But you also write in your book that – I don't know if it's a happy ending, but maybe a hopeful ending – the chicken industry which started this may actually be helping to lead us out of it. Can you tell me about that?

MM: It's a lovely and surprising symmetry in this long history of making this mistake. Starting about four years ago, poultry producers – led by the company Purdue Farms, which are the fourth largest chicken company in America – started to turn away from routine antibiotic use. The head of Purdue, Jim Purdue, the grandson of the founder, called a press conference in Washington in 2014 and announced that his company had decided to go as close to antibiotic-free as they could. And now, three years later, they are very close. After Purdue came so many other poultry production companies and food service companies: Tyson, Chik-Fil-A, McDonald’s, Costco, Wal-Mart, and a whole suite of fast food chains announced that they were going to pursue antibiotic-free chicken. The backdrop to all of this, the reason why this happened, that sort of proximate reason, is that there was a change in regulations around antibiotic use in agriculture in the US. But the real reason, I believe, is that consumers were turning against antibiotic use and were speaking up to companies and saying, “We don’t want to spend our food dollars on this anymore. We want you to find a different way.”

FL: It really was that hopeful? I hate to think it would be naive to have hope, but it enough people just said, “I don't want to eat chicken with antibiotics. I don't want to feed that to my kids.” And that's why they changed?

MM: I really do think so. Purdue says that before they made this change they were getting 3,000 comments from their customers a month through various channels asking about antibiotic use. Before that company made the change and started this snowball rolling, there were large health care systems like the University of California and large school systems like the Chicago Public Schools that were saying to the meat production industry, “We're going to change our buying. We're not going to spend our money on this anymore.” When buyers that large speak to big companies, big companies listen.

FL: The hope here is that through our – meaning us, the people, the consumers – continued demands, producers will respond and they can show how you can have these industries without this practice. Thank you so much, Maryn.

MM: Thank you for having me.