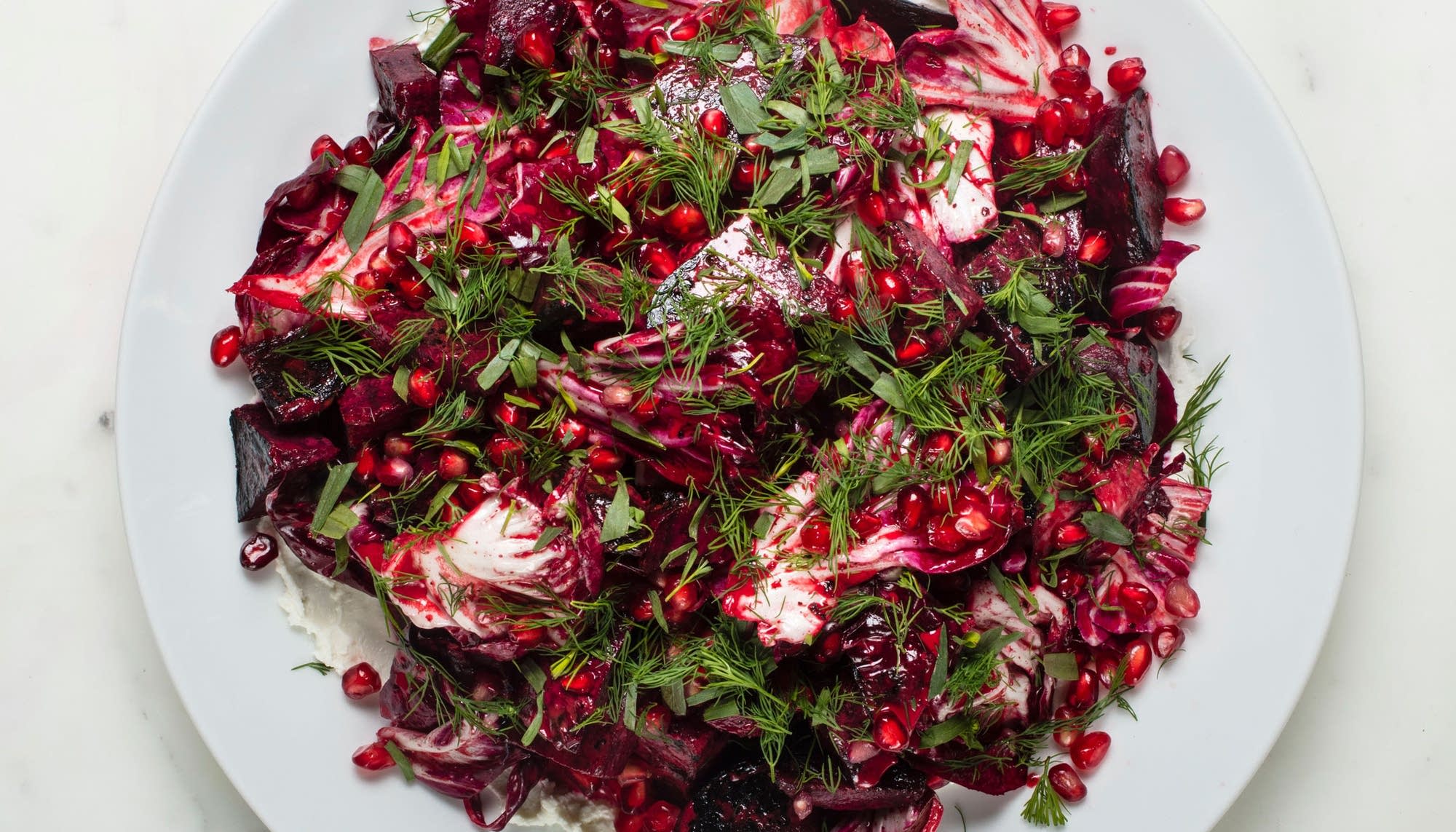 When it comes to beet salads, it’s hard to escape the ubiquitous combination of beets and goat cheese. The pairing works because the tangy, creamy, salty goat cheese is a great foil for the beets’ earthy sweetness. (Interestingly, beets’ sweetness is actually the result of a winter survival strategy. The sugars in beets act like antifreeze, keeping the fluid in their cells from freezing and forming destructive ice crystals.) But that doesn’t mean the combination hasn’t gotten a little tired. To reinvigorate the classic beet salad, we looked for ways to deal with the sweetness itself. By charring the cooked beets—essentially burning some of the sugar—we cut down on sweetness and add some complementary bitterness. We amplify that bitterness with crisp radicchio and toss it all with a dressing made from the beet cooking liquid. And to replace the goat cheese? A simple spread of feta and Greek yogurt adds plenty of creaminess. A final flourish of tart pomegranate seeds provides pops of bright acidity (while staying on message with the ruby color scheme), while fresh dill and tarragon round things out with some herbal notes.

There aren’t a lot of things that we feel are actually better (and not just easier) when cooked using the sous vide method, but beets are on that list. Cooking beets this way (as opposed to foil-wrapping and oven-roasting) yields a final product with perfect texture, better flavor penetration from the aromatics and seasoning that the beets are cooked with, and no moisture loss due to evaporation. If you have a sous vide device (and the time), we highly recommend using it for this recipe. That said, oven-roasted beets will work great, and we have tested and developed this recipe using both methods. Adding the small amount of water for the oven-roasting method compensates for evaporation. If you cook the beets sous vide you don’t need additional water. If you are using a stick-style sous vide device in an open pot or container, you can speed up heating and reduce evaporation by covering the top of the pot or container with plastic wrap.

2. If cooking sous vide: Toss beets, oil, vinegar, 1 tablespoon salt, and 1/2 teaspoon pepper in large bowl to combine. Transfer beets and liquid to 1-gallon zipper-lock freezer bag. Press out as much air as possible from bag and seal. Gently lower bag into water bath, allowing remaining air bubbles to rise to top of bag (do not let go of bag). Reopen 1 corner of zipper, release remaining air pockets, and seal bag fully. Clip top corner of bag to side of water bath container, making sure beets are fully submerged. Cover water bath with plastic wrap to limit evaporation. Cook for 4 hours. Using tongs, carefully remove bag from water bath; check beets by squeezing them through bag, they should give slightly. Open bag and pour cooking liquid in bag into medium bowl (you should have about 1/2 cup). Set beets aside until cool enough to handle. Peel beets and cut into 1/2-inch-thick rounds.

If roasting: Set wire rack in rimmed baking sheet. Toss beets, oil, water, vinegar, 1 tablespoon salt, and 1 teaspoon pepper in large bowl to combine. Stack 2 10-inch-square pieces aluminum foil and press into large bowl so that foil forms bowl shape. (The double layer of foil prevents the packet from tearing under the weight of the beets and their cooking liquid.) Arrange beets in single layer in center of foil and pour liquid over top. Bring edges of foil together and crimp to form tightly sealed packet. Transfer packet to prepared rack and bake until beets can be easily pierced with paring knife or cake tester, 1 to 1 1/2 hours for small beets and 1 1/2 to 2 1/2 hours for medium to large beets. Open foil packet and pour cooking liquid into medium bowl (you should have about 1/2 cup). Set beets aside until cool enough to handle. Peel beets and cut into 1/2-inch-thick rounds.

4. Heat oil in 12-inch skillet over high heat until just smoking. Carefully transfer beets to skillet in single layer. Cook beets until both sides are well charred, 5 to 7 minutes, flipping beets halfway through. Transfer beets to cutting board and cut into 1 1/2-inch pieces; transfer to bowl with yogurt-beet dressing.

5. Add radicchio to bowl with beets and toss to combine. Season with salt and pepper to taste. Spread yogurt-feta mixture in even layer on large serving plate. Arrange beets and radicchio on top, then sprinkle with pomegranate seeds, dill, and tarragon. Serve.