From The Power of Invitation with Melissa Clark and Friends
December 8, 2017

Tasting Georgia: your invitation to a unique feast table

by Francis Lam
Listen: Tasting Georgia: your invitation to a unique feast table
10:45 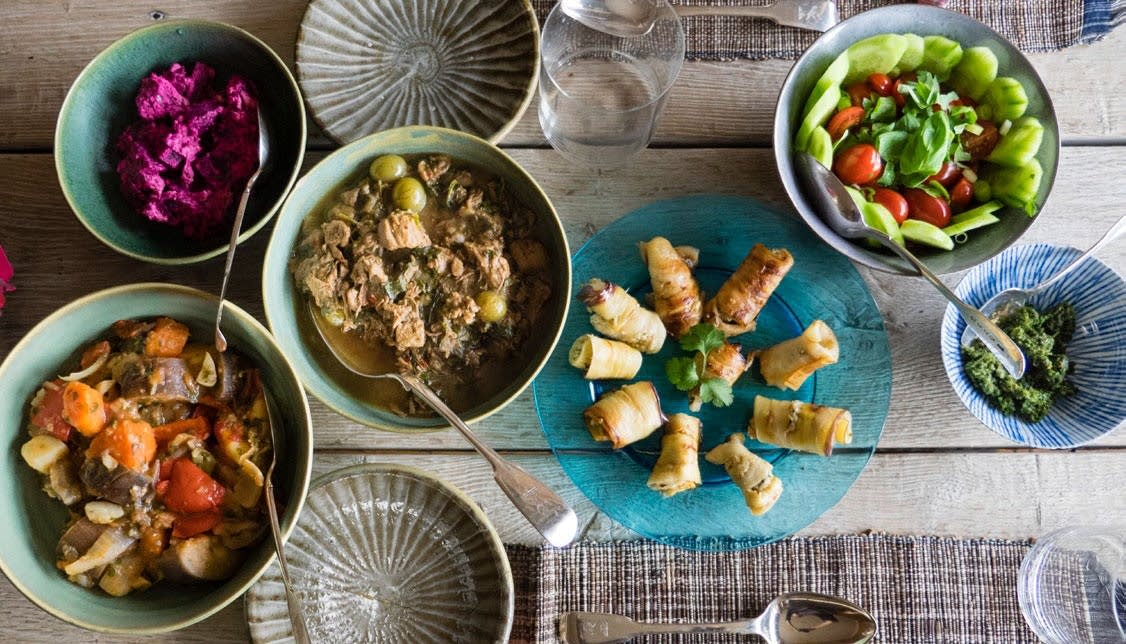 Writer/photographer Carla Capalbo traveled extensively throughout the nation of Georgia gathering stories and recipes for her gorgeous new book, Tasting Georgia. One of the her most interesting discoveries is that of the large group feasts -- or supra -- that Georgians enjoy. Capalbo explained to Francis Lam some of dishes you're likely to find on a Georgian feast table, and the traditions in which you can expect to be involved. She also shared her recipe for Adjarian Khachapuri.

Francis Lam: I would love to learn about the food of the republic of Georgia. If you look on a map, Georgia sits in a part of the world that’s between Russian to the north and Turkey to the south; it also borders Armenia and Azerbaijan. It’s fascinating to me because what I think of as Russian food isn’t really anything like what I think of as Turkish food. Does the food of Georgia sit in between those two? Does it look like either of them?

Carla Capalbo: I always think of Georgia as this beautiful creature that sits between Turkey – and countries further south – and Russia. What Georgia has that the others don’t have is this ability to grow. It has a natural abundance, both in terms of its beautiful climate, but it’s also very fertile. It’s able to grow all the things the other countries - particularly Russia - long for. Thing like grapes for wine and exotic spring fruits like yellow cherries and wild strawberries. Georgian food also has had a lot of influences because it was in that central position between the Black Sea, so it had invasions from every direction over its long and troubled history. But instead of taking away from what the Georgians had, that enriched the Georgian food culture.

FL: Can you tell me about some of the key dishes or key flavors?

CC: First of all, one of the interesting things about Georgian food is that they love the complexity of serving not just one dish at a time but a group of dishes. You wouldn’t just have a single dish – I mean you might if you were at home – but normally if you’re having dinner with friends, there would always be at least four of five dishes and when you move up to what’s called the supra, or the feast, you would have upwards of 10 or 12 different dishes all appearing on the table more or less at the same time. There’s an orchestration of flavors and textures. You could have something rather sour. For example, there’s a lamb stew that I love; it’s made with tarragon and bitter greens like arugula and sometimes nettles and radish tops, but it also has sour plums in it. That balances off the khachapuri, which is the famous cheesy bread that everybody loves.

FL: What other dishes might be on the Georgian feast table?

CC: One of the things that I was fascinated by when I first started going to Georgia was the way that what I call the “supra tables” actually look. In the United States, you would sit down to a table that might be laden with knives and forks, but there wouldn’t be any food on the table already. Whereas in Georgia, you sit down to a table that’s already abundant with food. The dishes already on the table would be many of the vegetable dishes because they’re often served room temperature or chilled. Many of those will have walnut sauces; the walnuts are a very important key ingredient in Georgian cuisine. They pound them – sometimes men, but let’s say mostly women cooks – they pound the walnuts with a mortar and pestle. They pound in tons of fresh herbs: handfuls of cilantro, opal, basil, mint, and dill. You get very lively flavors from all of this.

What’s also very lovely about it, is that if it’s a long table – supposing you’ve 25 or 30 people sitting at a supra table, which you easily could – the dishes are never just one big bowl of something. There will be little dishes placed along the table so that you, as the guest, never have to reach very far to have all of the different things that are being presented at this feast. You’d have your vegetable dishes, you might have some cheeses sliced, you definitely have fermented vegetables or even blossoms.

CC: Yes. They take the clusters of flowers from the acacia tree or from the bladdernut bush – which they call jonjoli.

CC: Jonjoli is lovely; it looks a little bit like a lilac cluster. They trim those from the plant; they pluck them just before the little blossoms open because they don’t want any bugs inside. They put them in jars or crocks with salt. It’s a simple fermentation method. They come out tasting almost like pickles without the vinegar-ness. They’ll dress a little dish of those with sliced raw onion and a little bit of lemon juice.

Once you sit down, little by little the hot dishes come. That’s when you might be served the stews or chicken with a garlic sauce. Or the dumplings which are quite extraordinary; they’re called khinkali and they are sort of like soup dumplings, but you hold them up almost as if you were holding a mushroom by its stem. Bite gingerly on the side, suck out the hot broth, and then you chew your way into the center. All of those hot dishes will come afterwards.

FL: And there’s a lot of toasting that happens at a supra. Tell me about the role of the toastmaster.

CC: He’s called the tamada. It’s almost always a man. At any gathering, it’s usually the oldest man at the table – but not necessarily. In any case, the head person in the room will be nominated as that evening’s tamada. The tamada’s role – particularly at the bigger supras – is to make toasts that are often in a sequence. For instance, in Guria – a region near the Black Sea – the first toast is always to peace. In other places, it might be to God or the family. But there are certain subjects that come up which will always be part of it. There will always be a toast to the guest. What I find beautiful about this is that it’s never just for the guest who is actually there, but the tamada would say this is a toast for our guest’s family and the people who he’s close to. Maybe even for the people who are no longer with us in this world, but who have been part of his life. That kind of embrace that you get from those toasts is something that I’ve always found very moving.

FL: It sounds like there is a real emphasis on not just the individual people but the communities we’re all connected to.

FL: Is there symbolism to the fact that when you get to the feast the tables are already laden with food?

CC: I don’t know if there’s a symbolism for that exactly. But there certainly is a symbolism to the use of the wine at the table. For the Georgians, wine is a food as well, but it’s a food that connects them to God. Orthodox Christian is the religion there. People are very involved in community, but also in a sense that eating and drinking is one of the principal things in life. You’re there to have a good time. It’s not a somber sort of a thing; it’s very jolly. One of the most wonderful parts about it – especially if you’re at a big supra – is that people who are sitting next to you will suddenly burst into song. There’s a lot of singing. It’s polyphonic singing, which is very beautiful and a little discordant. When they start singing, sometimes it literally it makes the hairs at the back of your neck stand up in excitement. Again, there’s a sense of the party is something very moving and involving. You feel sort of initiated into the culture of Georgia when you go to one.

FL: Wine, song and food. It’s what life is all about it.