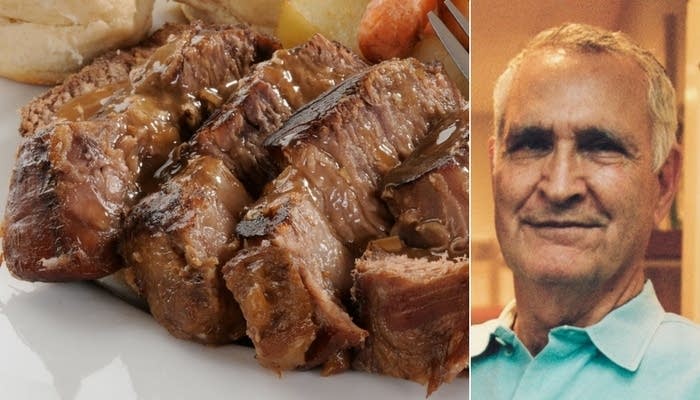 From the pages of a family heirloom cookbook comes a unique twist on a classic comfort food. Francis Lam talked with his friend and cookbook author John “Doc” Willoughby about the unexpected ingredients in Doc’s grandmother’s recipe for Lazy Sunday Pot Roast.

Francis Lam: Here’s a hypothetical situation. It’s the weekend after Thanksgiving. I still have family in town, and I feel like they’re my responsibility. The giant turkey, the leftover sides, and all the sandwiches were not enough. They still need to eat. What should I make?

Doc Willoughby: You should make them my grandmother’s lazy Sunday pot roast, because it is as easy as it sounds, everyone likes it, and it feeds a crowd.

FL: This is literally your grandmother’s pot roast?

DW: Literally. When my grandmother died, I inherited her recipe book. I was just starting to get into food, so I was quite excited about this. In our family, my grandmother was a cook. I was raised in rural Iowa in the 1950s and 1960s, which was a time of when we were still trying to get over the way people started cooking back then – where anything canned or frozen was considered superior to anything fresh. It was modern, easy, and trendy. My father had a huge garden, but my mother refused to cook anything out of it because she preferred the canned and frozen.

However, my grandmother was exactly the opposite. She raised four children on a farm before the days of electricity and running water. Every single thing they ate at supper – flour, sugar, lemon, things like that – she made. They raised it, butchered it, and made it on the farm. She was a truly local cook – and a good cook. She cooked three meals a day for 50 years, and we loved going to her house for dinner.

When she died, I got her cookbook. It wasn’t a book of printed recipes; it was a book of blank pages on which she wrote her recipes. There were little pockets labeled: meat, fish, bread, things like that. They were stuffed full of her handwritten recipes. I started looking through it and was a little disappointed because the things she made all the time that I loved – fried chicken, mashed potatoes with creamed tomato gravy, apple pie, pickled crab apples – there were no recipes for those. Why would she use recipes for those? She’d been making them her entire life. But there were a few very interesting recipes.

I pulled this one out because it was labeled “Lazy Sunday Pot Roast.” My grandmother was anything but lazy. When she was in her late 80s, she was still taking food to those poor shut-ins who were 20 years younger than she was. I wanted to see what she considered a lazy pot roast. When I started looking at it, it was super easy – like eight ingredients. But they were weird. These were things that I’d never seen in a pot roast before.

First, instead of potatoes and carrots – the things you usually have in a pot roast – there were apples. She had an orchard of Baldwin apples on her farm, so she called for Baldwin apples. There was a tablespoon of caraway seeds; I’ve only known caraway seeds as something you put into baked goods, right? There was marjoram. She did cook with marjoram, but I don’t remember exactly what she used it in. These three ingredients seemed completely out place in a pot roast, so I thought, “I’ve got to make this.” Both because of the title, and because it was weird – and weird can be good.

I made it. It was completely simple. Chopping up the apples is the hardest thing you have to do. Then you set it in the oven for three hours, and you’re done. It was amazing. It’s got the sweetness from the apples. Marjoram is a lot more aromatic. People say you can use oregano instead, but it’s not the same. Marjoram is sweeter, more floral and aromatic. And then you’ve got the caraway seeds, which are earthy and kind of licorice-y. Not the tastes you usually associate with pot roast, right? But I can’t even tell you how many times I’ve made it since then. It’s been my go-to dish for when I want to make something that feeds a crowd, something that I know everybody will like. It was probably the nicest gift my grandmother could have given me.