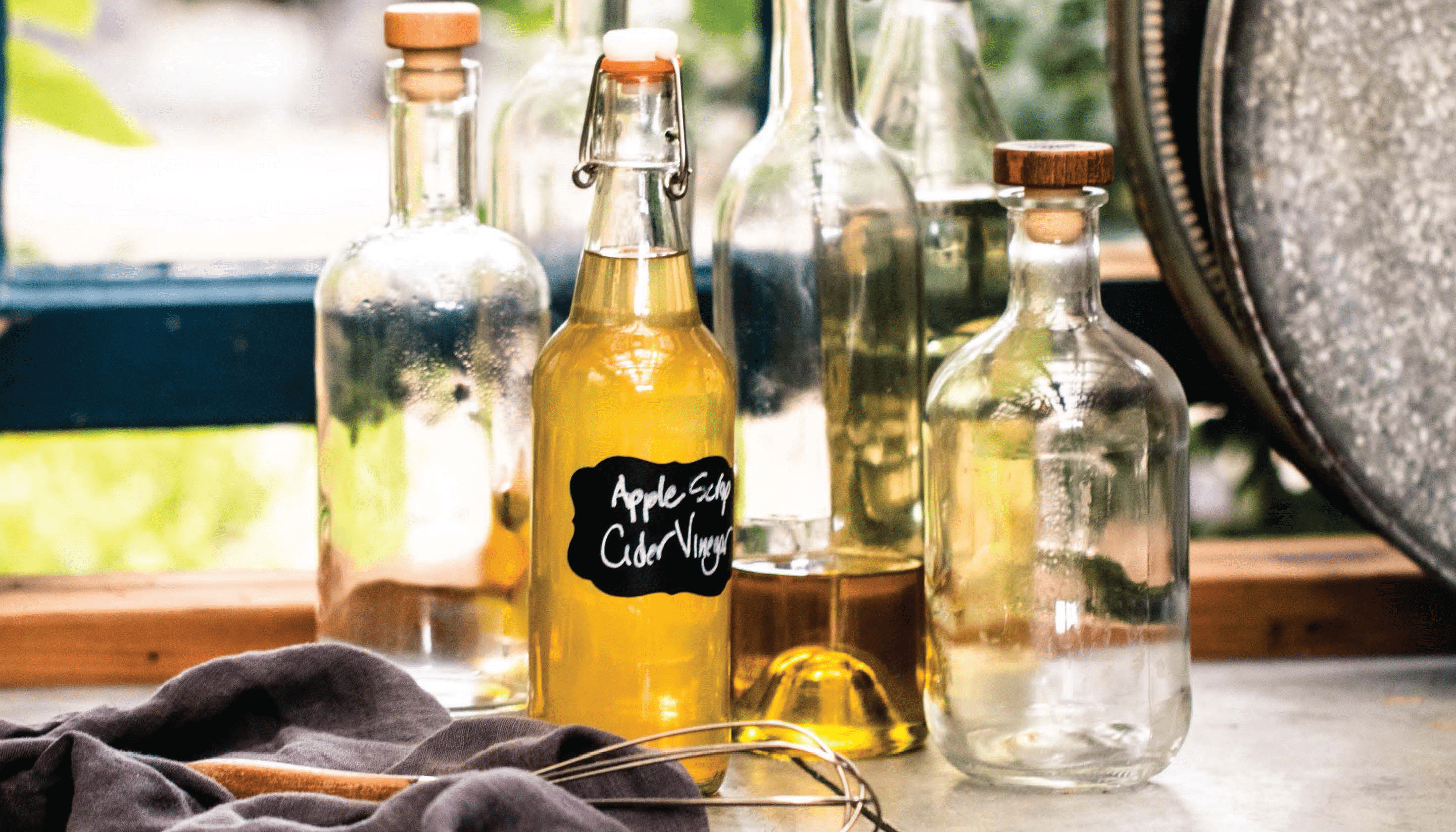 I keep a small zip-top bag full of apple cores, peels, and other scraps in my freezer, and I add to it every time I cut an apple for a snack or make a batch of cider. When I have enough to pack into a canning jar, I turn those scraps into vinegar. Essentially, this works by mixing the scraps with water and sugar, letting it ferment, and then ignoring it until the liquid turns into vinegar. The resulting vinegar is slightly less intense and flavorful than “real” vinegar, but still perfectly tasty for making everything from salad dressing to tri-tip marinade.

Use this ratio of scraps, water, sugar, and raw vinegar and scale it up or down to change the amount of vinegar you want to make. You can skip the raw vinegar altogether if you have trouble finding some—it just helps speed things along. Metal can give your vinegar a metallic flavor, so avoid using metal utensils.

Cover the mouth of the jar with a clean, tightly woven dishtowel or cloth napkin secured with a rubber band. Place the jar somewhere out of direct sunlight, at room temperature (70° to 75ºF), and away from any other fermentation projects.

After a few days, you will see the liquid begin to bubble and ferment. Stir the liquid daily and push the apple scraps back under the surface. This prevents mold from forming, but if any does, you can just scoop it away before stirring the scraps.

When the bubbling slows, strain the liquid to remove the apple scraps, and transfer the liquid to a new jar. If you’d like to speed up the vinegar process, add the raw cider now. Stir the liquid vigorously with a wooden or plastic spoon until it becomes foamy. Re-cover the jar with the cloth and secure with a rubber band.

Let the liquid stand until it turns into vinegar, 3 to 6 weeks. Check occasionally. You may see a white-or beige-colored film forming on the surface; this is called the “mother” and it’s a natural part of the vinegar process. If you see any mold forming on the surface, scoop it away and continue. (If your vinegar develops a mother, you can save it in a closed container in small amount of cider vinegar and use it in your next batch in place of the raw cider vinegar.)

When the liquid smells and tastes like tart cider vinegar, it’s ready. Transfer it to a small, airtight container, like an old vinegar jar or a swing-top bottle. Store in a cool, dark cupboard and use within a year.