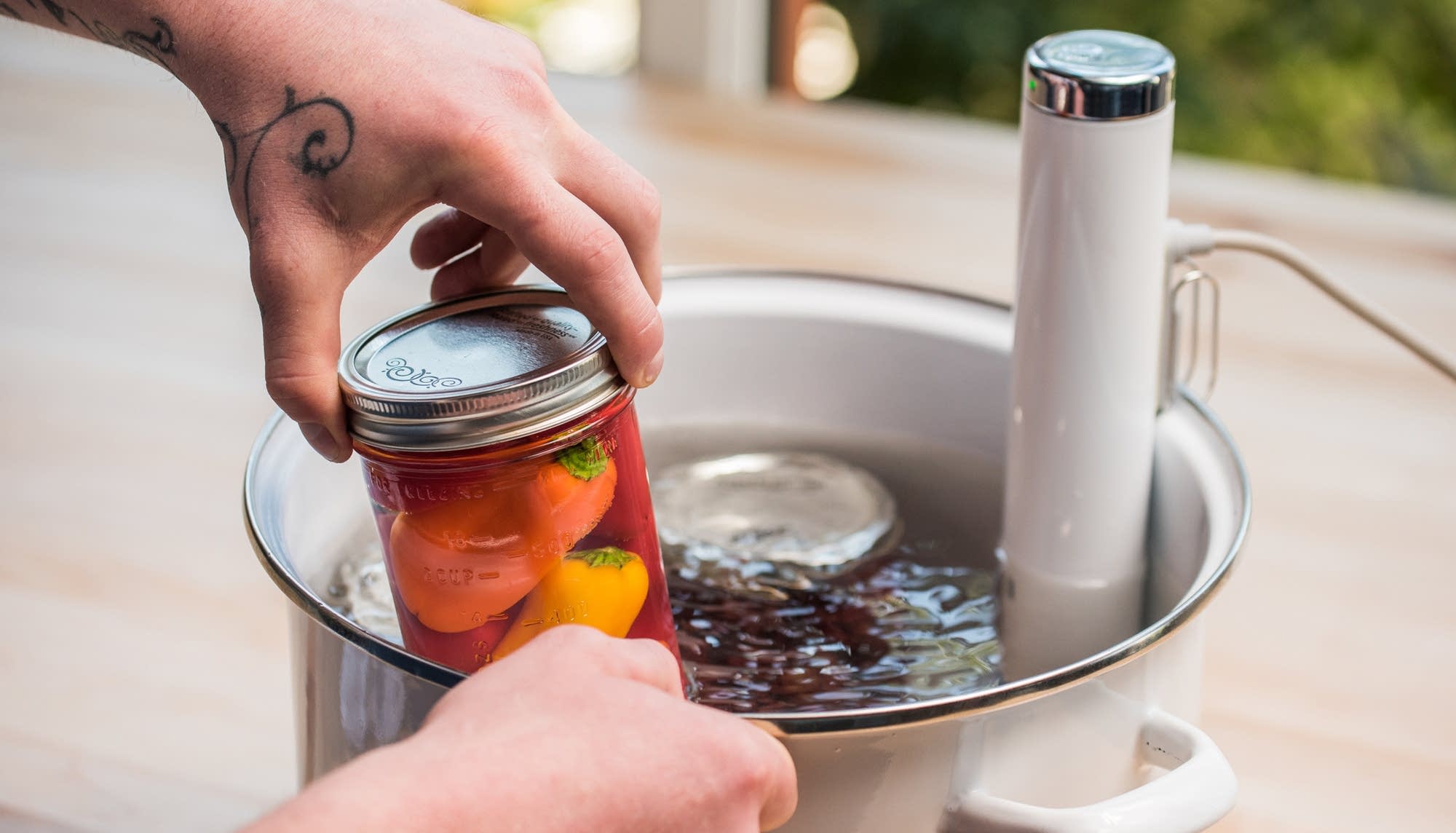 Sous vide is a wonderfully easy cooking technique. Essentially, you create a warm water bath in which to slow-poach food that has been sealed in a plastic bag. Thanks to modern technology, most sous vide equipment is now lighter in weight, more precise, and – most importantly – affordable. So, it’s no surprise that the process is catching on with home cooks. For more insight into this low-maintenance cooking method, Francis Lam talked with Molly Birnbaum, executive director of science at America’s Test Kitchen. America’s Test Kitchen also gave us sous vide recipes for Sous Vide Soft-Poached Eggs and Cochinita Pibil.

Francis Lam: Let's start with the basics. What is sous vide cooking?

Molly Birnbaum: Sous vide cooking is a relatively new technique to enter the land of home cooks. The name comes from the French for “under vacuum.” You seal food in plastic and cook it in a water bath that's heated to a very precise temperature. This is done with a sous vide circulator, which is basically an electronic stick that you put into a pot or a heat-safe plastic container. You program the stick to a particular temperature; it will heat water to that temperature and keep it there for as long as you want. The goal is to bring food up to the exact temperature of the water bath, which is usually the serving temperature of the food. It's incredibly precise.

FL: It was a revelation to me to learn – and I can't believe I had to go to cooking school to learn it – that a medium rare steak is 125 degrees. Once you know those numbers, you can say, “I want a medium rare steak,” set the water bath to 125, put the food in the plastic, place it in the bath, and it'll be medium rare until you feel like eating it.

MB: Exactly. Do a quick sear on the stovetop to give it that crusty brown crust that you love, and it's perfectly done. Also, sous vide gives you time back, because you put food in the bath and then you can walk away. What I like to do when I'm circulating food for dinner is make a side salad or a sauce.

MB: Our test cooks call it swimming. They're going to go “swim something” right now, which I think is nice.

MB: Since sous vide gives you time back, it is nice for dinner parties or weeknight dinners. Sous vide gets a bad rap for being too tech-y and science-y, or something that you have to understand Celsius and Fahrenheit, time and temperature graphs, etcetera. But, it's not. It’s incredibly simple. Put food in a Ziploc bag, stick it in a water bath, heat it to the precise temperature, and walk away. There's no danger of overcooking your food.

FL: What's the effect of time? Like you said, if you have a piece of beef at 125 degrees, that's always going to be medium rare. Does it matter if it stays there for 20 minutes or for 20 hours? For instance, I saw a chef once advertise on his menu short ribs braised – sous vide – for 72 hours. Did that make a difference than if it was for 48 hours or 53 hours? Presumably, it's all the same temperature.

MB: That's an excellent question. Sous vide is about temperature, but it's also about time. You can play with those two things together in ways that you can't do with traditional cooking. You can do interesting things with meat held at lower temperatures for a longer period of time. For example, we've been working with chuck roast, which is a relatively cheap piece of meat. It has a lot of collagen and fat. Traditionally, you would cook it a higher temperature for a number of hours to break down the collagen and get it tender. But for sous vide, we've been tying this chuck into a roast-like shape, something that looks more compact and beautiful. Then we sous vide it at 133 degrees Fahrenheit for 24 hours; that's a long time in a relatively low temperature bath. When it’s done, it’s like a prime rib. All that time in the bath keeps it bright pink, incredibly tender and juicy, and it tastes beefier than anything I've ever tasted. Most importantly, it's cooked perfectly even from end to end.

There is something to the enzymes at a lower temperature; more of them are active. It’s the same thing that happens when you dry-age steak. When you do low temperature cooking, you tenderize the meat, and it becomes more flavorful.

FL: Is it safe to cook in the sealed bag? Is there gnarly stuff that's going to leech from the plastic into our food?

MB: That's a question we get all the time. There's a lot of stuff out there about how plastic containing BPA – which is an industrial chemical – is harmful if it's heated, and that it can leech into the food. The good news is that all plastic bags created for sous vide, or for cryovacing or vacuum sealing, are incredibly safe. Even better, all of the good quality plastic bags like by Ziploc – the freezer safe Ziploc bags – are also safe. They're not made from BPA, they're made from polyethylene and polypropylene, which have been shown to be safe when it comes to cooking in heat.

Also, sous vide isn't necessarily just about cooking in plastic. You can cook in glass Mason jars. When you're cooking eggs, they can cook right in their shell.

FL: Aside from perfectly cooked meat and fish, what other things can you play with in sous vide?

MB: When I started working in sous vide at America's Test Kitchen, I thought it was just about meat and eggs. But, as we've been working on a new sous vide book from the science team, we've been diving into recipes that surprise me. For example, homemade yogurt. You bring milk up to an almost boil to kill bacteria. Then add a little bit of starter, which can be yogurt that you already have. Put it into mason jars and circulate it at 110 degrees Fahrenheit for anywhere between 5 and 12 hours depending on how tangy you like your yogurt in the end. It's foolproof because you don't have to worry about having it in a low oven or monitoring a pot on the stove.

MB: We've also been making ricotta. And, apparently, dessert sous vide is a thing. We haven't gotten to the dessert chapter yet, but we have plans to make crème brûlée, pudding, and dulce de lech. We’re very excited to start testing that.

FL: There are many sous vide circulators on the market right now. Have you tested them all?

MB: Our tasting and testing team tested all the circulators that are currently out there. Their winner was the Joule Sous Vide circulator by ChefSteps. It’s small, sleek, and incredibly accurate. The Joule is around 200 dollars, which is much cheaper than the first generation of sous vide devices used to be. They used to be a lot thicker and slower. Now, they are light, easy, and fast. They're also connected to WiFi and Bluetooth, so the Jewel works via an app on your smartphone, which is convenient.

Postscript from The Splendid Table

After we originally published this interview page, several fans wrote us with concerns about food safety issues related to foodborne illnesses and sous vide. We asked Molly Birnbaum - executive director of science at America's Test Kitchen - to respond to those concerns. She provided the following information:

MB: The danger zone is often cited as 40 - 140 degrees F, but the zone isn't just about temperature, it's also about time. And most bacterial growth halts above 130F with enough time -- so we cook at or above that temperature for enough time to kill potentially harmful growth. Douglas Baldwin has some great pasteurization charts on his website for further reference.

So, for us and our recipe development: if cooking below 130F, we sear meat before we cook it sous vide to kill any bacteria on the surface of the meat. We also rapidly chill down (in an ice bath) any food that we're planning to save in the fridge for later, to minimize any time in the danger zone. Finally, we definitely don't sous vide raw garlic (as there's a risk for botulism).