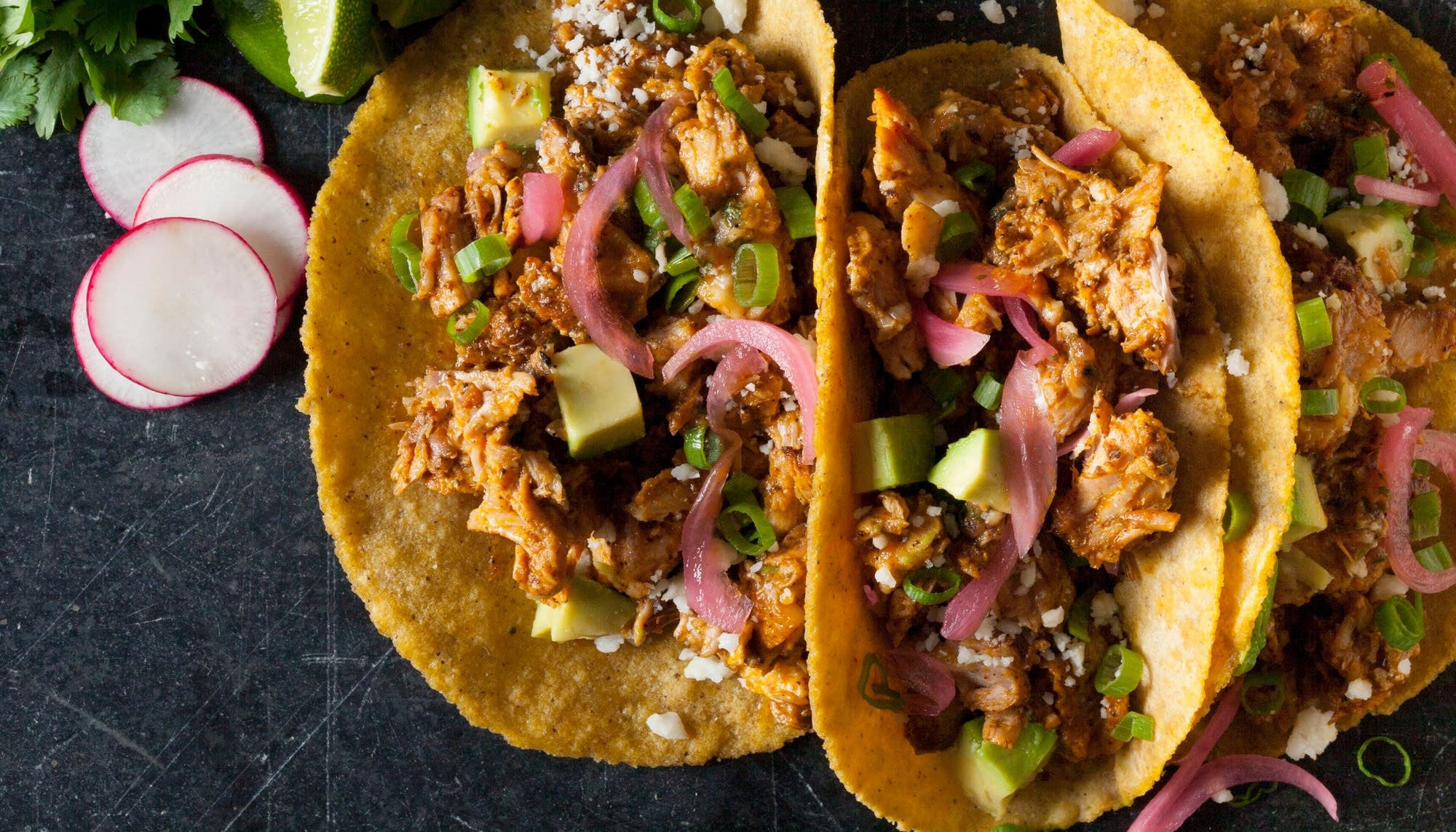 Cochinita pibil is the pride of the Yucatan peninsula—a dish of smoky, slow-roasted pork marinated in a special blend of ingredients including cinnamon, allspice, and achiote (annatto) seed. Cochinita means “baby pig,” and the real-deal recipes use a whole suckling pig. Traditionally the whole thing is wrapped in banana leaves and then buried in a pib—a pit with a fire at the bottom. Here I use Boston butt and employ a two-stage “grill-and-swim” cooking process to make things a little more convenient and a lot juicier. Pregrilling the meat adds great flavor, while low and slow cooking in a water bath produces especially succulent meat—no pib required. Plus, you won’t have to fire up your grill on taco night, so you can focus on making Homemade Corn Tortillas or that sweet playlist you’ve been meaning to put together.

Pork butt is often labeled Boston butt in the supermarket. Annatto or achiote seeds are derived from the achiote tree and are typically used as a food coloring to impart a red-orange hue to food. Used in sufficient quantities, they provide a complex, medicinal flavor. Canela or Ceylon cinnamon is a much milder type of cinnamon than its more conventional cousin cassia. It is less spicy and has notes of vanilla, honey, and even flowers. Mexican oregano (Lippia graveolens) is technically a relative of lemon verbena and native to Mexico. In contrast, Italian or Mediterranean oregano is a member of the mint family. While both share similar flavors, Mexican oregano has more savory and citrus notes and even hints of licorice. All these ingredients can be found at Mexican or international grocery stores or in high-end supermarkets.

It’s important to press out at as much air as possible from the bags to help keep them submerged during cooking in step 6. After cooking for 22 to 26 hours in step 6, the bags can be chilled in an ice bath and then refrigerated for up to 3 days; reheat in water bath at 155 degrees F/68.5 degrees C for 30 minutes before serving.

3. Peel garlic and add to spice mixture in blender along with orange juice, vinegar, salt, and liquid smoke; blend on high speed until smooth paste forms, about 3 minutes, scraping down sides of blender as needed. (If your blender is having a hard time breaking down the spices, you can add up to 2 tablespoons water to help things along.) Measure out 1/4 cup spice paste and rub evenly over pork. Leave remaining paste in blender; cover.

For Gas Grill: Turn all burners to high, cover, and heat grill until hot, about 15 minutes. Leave all burners on high.

5. Clean and oil cooking grate. Place pork and onions on grill (if using charcoal, place over coals) and cook until well charred on first side, 3 to 4 minutes. Flip pork and onions and continue to grill until second side is well charred, 2 to 3 minutes. Return pork to large bowl. Continue to cook onions until softened, flipping occasionally, about 4 minutes; transfer onions to small bowl.

6. Add onions to blender with remaining spice paste and blend on high speed until smooth, 1 to 2 minutes. Divide pork and spice paste between two 1-gallon zipper-lock bags; massage pork and paste in bags to evenly coat. Divide banana leaf and bay leaves between bags. Press out as much air as possible from bags and seal. Working with one bag at a time, gently lower bag into water bath, allowing any remaining air bubbles to rise to top of bag (do not let go of bag). Reopen 1 corner of zipper, release remaining air pockets, and seal bag fully. Release bag into water bath and cook for 22 to 26 hours.

7. Remove bags from water bath, open bags, and use tongs to transfer pork to cutting board. Strain cooking liquid in bags through colander set over large serving bowl; discard solids in colander. Roughly chop pork into 1/2-inch pieces and transfer to serving bowl with cooking liquid; toss to combine. Season with salt and pepper to taste and serve with tortillas and garnishes.