Guide to eating Filipino food in the US

by Francis Lam
Listen: Guide to eating Filipino food in the US
08:57 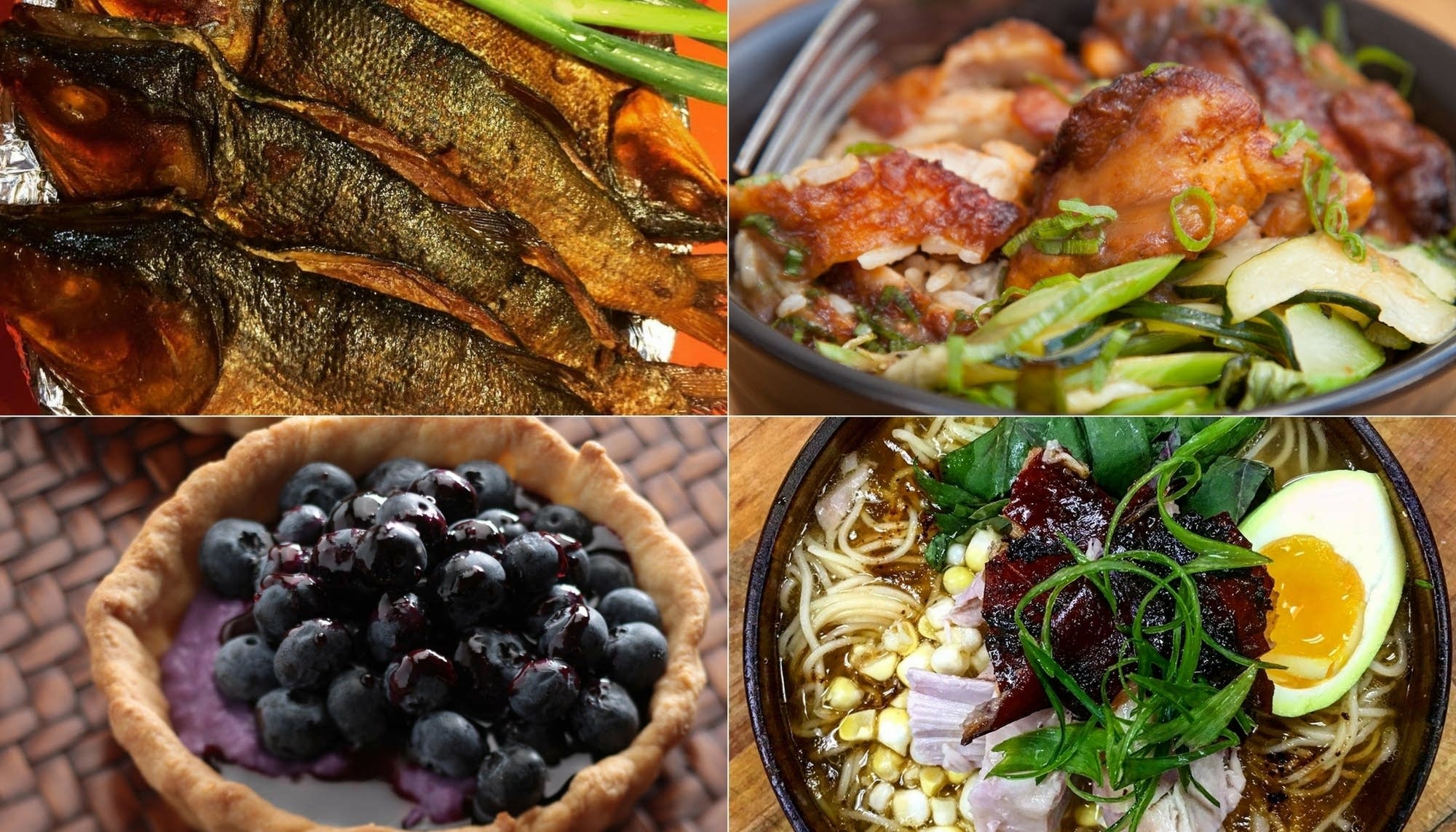 Over the last few years, Filipino cuisine has seen a huge explosion in popularity in the United States. Why wouldn’t it? The flavors are bold and bright, and the food of the Philippines is friendly for vegetarians, omnivores, and seafood lovers. Joanne Boston is the Vice President of the nonprofit group, Filipino Food Movement. She travels the country to search out the newest and hottest chefs, and to revisit the classic neighborhood restaurants. She talked with Francis Lam about the areas of the country that seem to have the strongest Filipino food communicates, and which ones may be on the horizon. See Boston’s full list of suggestions below the interview.

Francis Lam: I'm excited to talk to you about Filipino food across the country, because there are parts of the country that we know there have big Filipino populations, and then there are towns and cities where I don't know that it was obvious to a lot of people. For instance, one of the best meals I've ever had in my entire life was at a little tiny Filipino restaurant not in the back of a grocery store, but in the back of the grocery store after you go down into the basement in Juneau, Alaska. I had tremendously delicious food there. Can you tell us where in the country we find Filipino communities, and what are some of the places we should eat when we go to those places?

Joanne Boston: Filipinos have been in the United States for a long time. They like to settle around water, because the Philippines is an island country. Anywhere they can get seafood and fresh vegetables is great. I'm from the Bay Area; there is a huge population of Filipinos here. I live in Daly City, which probably has the most Filipinos outside of the Philippines; we actually call it Manila Town. I have lots of friends who are from Seattle; there’s a huge community there. Of course, there's New York City, Virginia Beach, there's a growing population in Chicago. There’s even some in Florida and Texas. And so many of them are coming into the middle of America. I have a friend who is in pop-ups in Saint Louis. Her name is Malou Perez-Nievera, and she's saying that everyone there is so welcoming, and they embrace her food. But, the earliest places that Filipinos came to were Hawaii.

FL: Do you find that there are regional correlations? Thinking greedily from my stomach's point of view, if I'm going to these communities, does the food change from community to community around the country?

JB: I think the most obvious example would be in Hawaii, because a lot of the Filipinos came there to work on the pineapple and sugarcane fields. The majority of the Filipinos there are from Ilocos or Ilocos Norte. Ilocos is known for their bitter flavors, lots of bitter melon, and you'll see that in Hawaii. If you come here toward the mainland, that's when you'll see it more dispersed. When I see chefs cooking, I see a lot of them picking up influences from their parents' regions, even though they've never live in the Philippines. The parents and the grandparents make an effort to cook food at their homes, so a lot of these chefs are paying homage to their grandparents and their parents.

FL: I think this is interesting because you're talking about the chefs who didn't necessarily grow up in the Philippines. As someone not in the community, but just looking at what's going on in the restaurant and chef worlds, I feel like I keep seeing lots of young Filipino-American chefs – people like Dale Talde, Angela Dimayuga, Alvin Cailan, Sheldon Simeon, and Chad Valencia – they start out cooking in restaurants, maybe out of passion for cooking or maybe just to get a job. But, almost none of them, to my understanding, started cooking in Filipino restaurants. More and more I see them striking out to open their own places, inspired by Filipino cuisine or the particular regional cuisine that they grew up with in their home. Then they're also adding techniques, methods, and influences from the French, Italian, or fine dining restaurants they came up in. Can you talk about this generation and why we seem to be seeing so many of these chefs right now in this moment?

JB: There is this huge attention towards Filipinos and these chefs. The media, I have to say, has a lot to do with it. They are giving more attention to the food and the people who are cooking it. I think the chefs feel empowered to finally cook what they grew up on. Alvin Cailan is a great example.

JB: Yes, he's in LA. Ruth Reichl visited his truck, it blew up on social media, and now he has a location in Las Vegas. He’s also opening a restaurant in New York, and he helped open another restaurant in LA. I think now, since the media has put so much attention on the food, even a lot of chefs who have been in the industry for decades have become a little more – I don't want to say, unashamed – but I think that's a little part of it. They were not sure if their food was going to fly with the mainstream community. With Alvin Cailan being one of the biggest spearheads – along with Nicole Ponseca in New York City – these chefs are saying, “I'm inspired by these people. I want to do my part, and I want to share my story with the community now.” I think that's what's going on.

FL: Let me just ask you straight up, can you name some names? Where should we eat great Filipino, both traditional and this new style of contemporary Filipino food?

JB: I could start in the Bay area. The traditional Filipino food that I go for is from this little casino near the cemeteries in Colma called Lucky Chances. It's 24 hours. If you're tired from work, you go there; if you're tired from the club, you go there. If you want to go there before work, you'll have a wide range of Filipino dishes, such as sinigang and kare-kare. What I go for are the silogs, which are the Filipino breakfast platter. It's like Filipino Denny's. You have your starch of garlic fried rice, fried eggs, and then you have your protein; you can have longaniza, which are the sausages, you could have tocino – sweet and cured pork – Spam, fried chicken. Whatever you want, you can make it into a silog. I love this place. Not only is it funny because there are hundreds of people outside the doors playing poker, but the majority of the people who are there are Filipino; the kitchen staff is Filipino, so they know what they're doing.

I like this one place in the Mission area of San Francisco – it’s a pop-up concept within a bar – called FOB Kitchen. They do their own version of silog and traditional Filipino dishes using really great meat. It's a very approachable menu; it’s delicious and great with the alcoholic dishes that they serve at the bar there.

In Seattle, I don't even want to say it's a “restaurant,” it's a little tabletop restaurant called Oriental Mart. It's at Pike Place Market, in the back. You don't see it from the street; you have to maneuver your way into the back of the store. They have the greatest salmon head sinigang. Sinigang is a sour soup. It's so comforting, especially when the weather in Seattle gets cold and wet. It's so good.

FL: What about in the middle of the country?

JB: I mentioned Malou Perez-Nievera. She has a pop-up called Skip to Malou in St. Louis. She does kabayan, which, I have to say, blew up in the United States over the last two or three years. It's a huge communal table lined with rice and fried meats, lumpia, grilled vegetables. Whatever you want, you just put it on top of the rice. You get all your friends and family to gather around the table, and you eat with your hands. In the Philippines, they call it boodle fight, which is a way that all ranks of the military eat together. My father is in the army in the Philippines right now; he's in charge of cooking the meals. He shows me pictures of the boodle fight that he cooks for his brigade. They all come with their guns and, in their military attire, they all eat together, all ranks. That is their form of community. Malou does that in St. Louis.

FL: It might be time for like a massive road trip. I'm going to stuff myself with Filipino food all around the country.

Joanne Boston’s Suggested Restaurants for Filipino Cuisine in the US

San Francisco (though this list can go on and on on, here are my favorites right now):

I have heard good things about Isla Pilipina, Hong Ning and Uncle Mike's Place in Chicago; Sarap pop-up in Detroit; Milkfish pop-up in New Orleans; Sari Sari Store in LA; Rook in Indianapolis; and Red Velvet Cafe in Columbus. I wish I can go to all of these places at least once in my lifetime.

Truth is, the middle of America does not have as many Filipino places. Also, many "Filipino" spots these days are specialized. Tselogs and Uncle Mike's, for example, are focused on breakfast. Purple Yam, Purple Patch, and Attic are entrée-based. Irenia and LASA are delving into contemporary techniques applied to indigenous or traditional ingredients – the same way Japanese cuisine has been. "I want to get Japanese food." What do you want? Ramen, sushi, bento, izakaya? I feel that's the direction Filipino food is going in. Business owners will stick to one focus and build a menu from that focus.