Filipino food: a cuisine of many influences

by Francis Lam
Listen: Filipino food: a cuisine of many influences
10:40 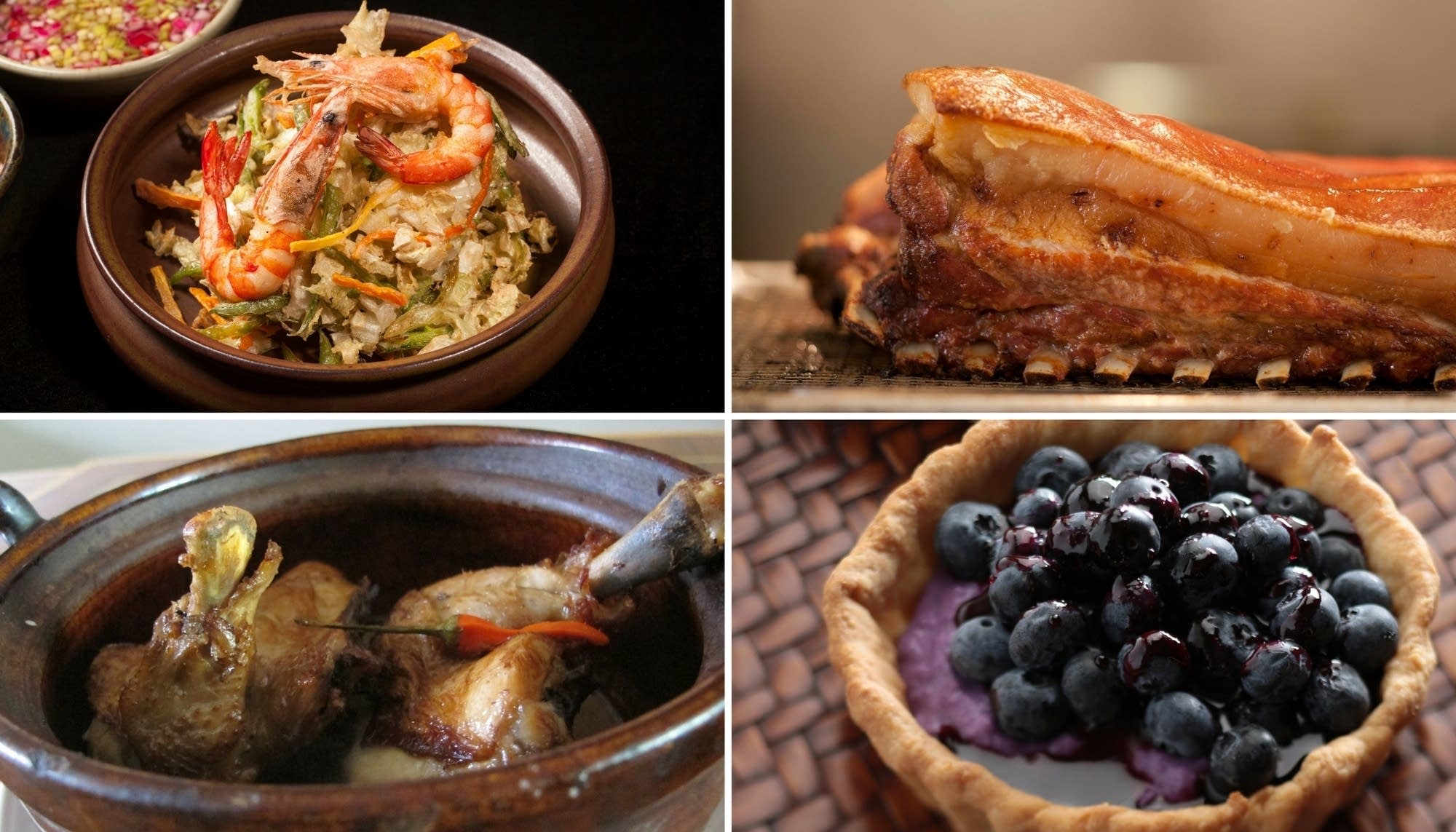 When we set out to produce an episode all about Filipino food, we knew we'd need a general overview of the cuisine of the Philippines: what it's like, what influenced its past, and how it's evolved to become the hottest new thing in the food world. We couldn't think of anyone better to turn to for this important lesson than Amy Besa; she's the award-winner author of Memories of Philippine Kitchens, and lovingly known as the "godmother of Filipino food in America." Besa and her chef-husband Romy Dorotan also own the Purple Yam restaurant in New York. Bring a taste of the Philippines to your table with her recipe for Ukoy, Filipino crispy shrimp and vegetable fritters.

Francis Lam:   To help people understand the wide world of Filipino food, you've come up with a clear framework. You divide the food into two sections. One you call “food that was always ours,” and the other you call “food we borrowed and made our own” – which I love. Let’s start with the first category. Can you tell us what are some of the original Filipino dishes, and how we can still see their mark on Filipino cuisine today?

Amy Besa: There are three dishes that are actually cooking methods; they are adobo, sinigang, and kinilaw. Kinilaw is like our version of ceviche. The sinigang is a sour broth, soured by citrus and sour fruit. And adobo has a Spanish name, but as the American food scholar Ray Sokolov said, he looked up all the adobos in the Latin hemisphere, and we're the only ones that braise our adobos with vinegar. When I traveled all over the Philippines I found these three dishes were cooked universally. What is great is that they are eaten from the richest to the poorest people. That's why I call them foods that were always ours. They are united by sourness; that's why I know they belong to us.

FL: In a place that's as hot, sunny, and tropical as the Philippines you have lots of native citruses. But anything with sugar – fruit or anything like that – will ferment pretty quickly, so you have all these vinegars that are natural to the place.

AB: You can make vinegar out of anything.

I define Filipino food as everything that grows in our environment, and what people do to it to eat and survive. That's the food that was always ours.

Then there’s the food that was borrowed. You cannot escape the fact that outside food will always come in. When I was doing my research, one of my go-to books is K.T. Achaya’s handbook of Indian food. Because one of our Filipino historians told me we were Hinduites first before anything. That’s why we have a lot of Sanskrit in all our languages. I was going through the book and saw the word ashoka, which in our language – in Tagalog – sukà means vinegar. Any word or name that can go back to Sanskrit is a very old ingredient. We have a lot of coconuts in the Philippines and the sap, once you draw that out, within minutes it will ferment; it's spontaneous fermentation. What a lot of our food is right now is pre-refrigeration, so we do eat a lot of dried meats, dried fish, salted fish, fish sauce, bagoong. A lot of fermented things.

FL: In a dish like adobo, which is meat – I often see it as chicken – but it can be pork, it can be fish. When I see recipes for adobo with a mixture of soy sauce and vinegar, sometimes it's almost one-to-one and I think, “Man, that's a lot of vinegar!” But every time I've had it, you can taste the sourness, but it's always balanced.

AB: Soy sauce is not the original ingredient for adobo; that's a Chinese influence. It’s really about balance and harmony between salt, vinegar, and the protein. The soy sauce came later.

Adobo is a cooking method that plays with sourness and saltiness.  The saltiness can come from different sources as well as the sourness can come from different vinegars.  There are many types of adobo that do not use soy sauce all over the Philippines.  There is adobo sa dilaw (yellow) which uses turmeric and many Visayans use achuete or annatto to give it color.  Soy sauce is primarily used for color as well as a source of salt.  The Philippines is an archipelago of more than 7000 islands so the primary source of flavor is salt coming from the seas surrounding our islands.  The Chinese came very early on.  The first recorded transaction between Chinese and Filipino natives was in the 10th century hence the influence of soy sauce came at around that time.  The history of soy sauce is also interesting as I have read that soy sauce came as a result of vegetarianism.  Fish sauce came from Southeast Asia and as it reached China, soy sauce came about as a vegetarian alternative to fermented fish sauce.

AB: We have pancit luglug, lumia Shanghai, and pancit canton. Those are all noodles and spring rolls. And yet, even though it's called lumpia Shanghai, if you go to Shanghai, you will never see that. Pancit Canton is not from Canton – it’s not Cantonese – it’s Filipino.

FL: What are in those dishes?

AB: They’re all like cabbage and shrimp, and all kinds of toppings, which they call sahog. They they mix it with different types of noodles. We have bihon which is rice noodle and egg noodle.

FL: And what are some of the dishes that show the Spanish influence?

AB: We have the afritada, morcon, and embutidos. All the stuffed dishes like rellanong manok, which is stuffed chicken. There are a lot of dishes that have tomato sauce and olive oil; that's very Spanish. But those are expensive ingredients, so they're considered fiesta fare – like the food of the rich and the elite.

FL: And even your use of the word – fiesta. That's the Spanish word for party, which has been taken by Filipinos. In your book, you mention that when the Philippines was a Spanish colony, it was run out of the Spanish colony in Mexico.

FL: That means there’s a huge Mexican influence in Filipino food. You mentioned dishes like chicken pipian, which is a Mexican dish, a stew of pumpkin seed sauce. You say there's a Filipino version of that and tamales. Can you describe some of those Filipino dishes?

AB: Tamales are a dish that came over, but Filipinos have indigenized it. Instead of corn meal wrapped in corn husk, we usually use ground rice and wrap in banana leaves. But the Mexican aspect of our culture is quite hidden. Most of the Mexican influences that I knew were from the fruits and vegetable that came in through the galleon trade. When the Spanish started to colonize the Philippines, the first settlers were Mexican – actually Spanish who were already settled in Mexico. When the Spanish came, they spoke Mexican Spanish. We have a lot of Nahuatl words in our language like nanay and tatay, which means mother and father. The Nahuatl terms are nana and tata.

FL: Let’s move forward in history to the early 20th century, where the United States colonized the Philippines for almost 50 years, right up until around the time of World War II. How do you see that influence in the food today?

AB: The first thing the Americans did was to prove to Filipinos that our diet of rice and fish was inadequate. We were a good market for American products, if you look at what was happening in the United States at that time: canned goods, evaporated milk, skim milk.

FL: Canned meat and corned beef in a can.

AB: Yes. All of those were brought to the Philippines because there's something about what the Americans produce – they do know how to capture your taste buds. I remember the first time I tasted Spam; I thought, “This is heaven! How could anyone invent something like this?” I got so addicted to it. I would look forward to that for breakfast.

For me, one of the most obvious indigenized American products is the buko pie, the young coconut pie. Americans are all about the double-crusted pie, right? But then we filled it with young coconut, and it is such a classic. People think of it as Filipino. There are also a lot of chiffon cakes everywhere. Even the Chinese stores make chiffon cakes. So, that's the influence of the United States.

Whenever people say our food is getting lost – with all the influence from fast food – I never get worried, because we are a people who know how to preserve our food and embrace foreign foods at the same time.